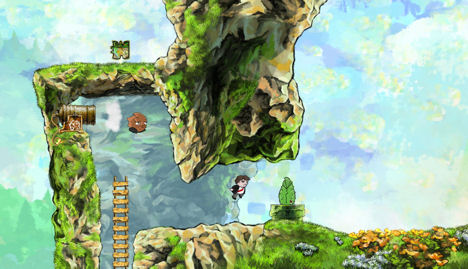 Xbox Live Arcade is graced by one of its rare good looking games today, as time-screwing platformer Braid has finally made its appearance, causing Rev Anthony-types to cream their jeans in sordid delight. Microsoft, of course, is well aware that people actually want this game, and have rewarded fans for their excitement and interest by nickle-and-diming them for 1200 points. Lead designer Jonathan Blow explains that this wasn’t his idea, but he’s comfortable with the vampiric decision:

My feeling was that Microsoft would price the game at 1200 no matter what I said; however, I never pushed them to that point. Late last week, Microsoft and I had a conversation where we talked about a bunch of issues and I agreed on the 1200 point price.

There are good reasons why I picked 1200 instead of 800 (I thought about writing them up today, but I’m not sure it’s really appropriate; I might, though, tonight. We’ll see how I feel about it later.)

The Reader’s Digest version is, I would have been perfectly happy with a launch price of 800 points. At 1200 points I am less happy, but I am okay with it.

With The Behemoth also stating that the final pricing decision rests with Microsoft, are we seeing a new trend that Microsoft will continue throughout its self-styled “summer” of XBLA? The reason why this sickens me is the fact that it’s clearly cynical exploitation on the part of Microsoft, and I think it’s rather despicable to charge extra cash simply because you know that, for once, your fanbase actually gives a crap about your games service. Very shoddy behavior, as far as I’m concerned.