I like breasts as much as the next woman, but this came out while I was in high school, and even then it sounded like a cynical attempt to make sales with controversy. Of course, this was also at a time when I was trying to maintain the illusion that I wasn’t interested in flesh of any kind, so I would have passed it up anyway so that no one would discover my dark secret.

Now I’m an adult and I can explore my interests without having to worry about getting “the talk” from my parents. So, I’m going to take this game — one that I’m probably going to hate — and see how long it takes me to see a nipple. That is, after all, the main bullet point of this game. Also, I don’t count nipples that are visible through tops. You don’t get bonus points just because you don’t wear a bra. 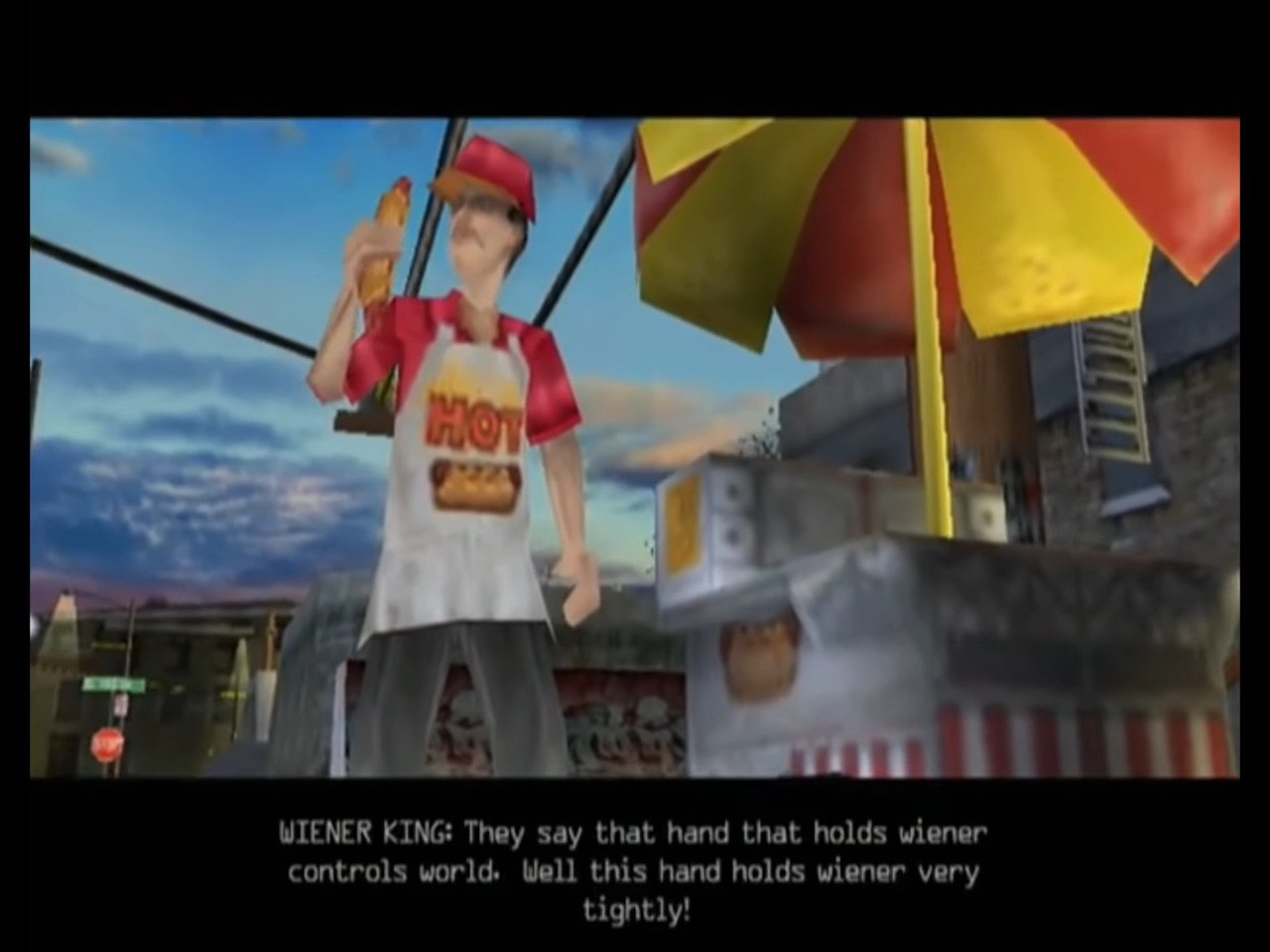 If you’re unfamiliar with the Tony Hawk’s Pro Skater formula, you basically live in a world where the walls are lined with quarter-pipes and everything can be grinded on. People inhabiting this world are only interested in sweet tricks and every problem can be solved by doing some sort of grind or footplant on them.

There’s no time limit. Instead, there’s a health meter, and when that empties, your run is over. While you’re still alive, however, you have to complete as many objectives as possible. Completing 10 in a level moves you onto the next one. There are also competition levels which are complete hogwash. I’ll get to those, because they’re somewhat important on our quest for toplessness.

You can create your own biker, and I don’t know why you wouldn’t, because I don’t think there are any pros on the roster. They’re all just generic people with dumb names. Unless they are pros and I just haven’t heard of them, in which case, I’m sorry for making fun of their names. They’re all essentially capable of the same feats of bikery, so just make whatever appeals. I made myself, because nothing is more appealing to me than my own image with larger boobs and a nicer butt. 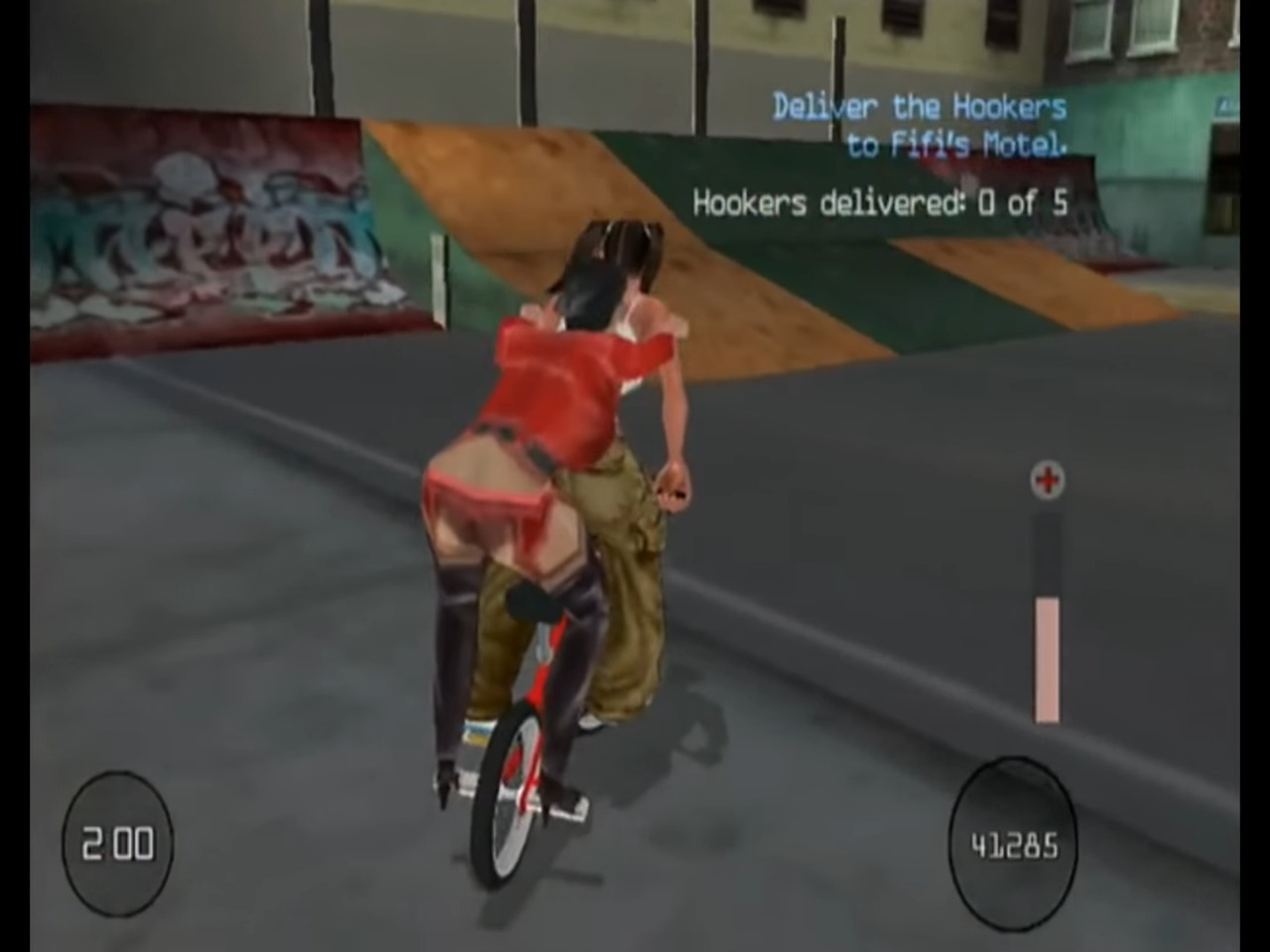 The main source of boobage appears to be in the movies you unlock by doing various tasks. Each one gives you a peek at a stripper, but while their gyrations are suggestive and pleasing, a lot of them are covering our quarries. The easiest movie to unlock on each level is from gathering 45 collectable objects. The other one is by finding all the gaps in a level. Anything can be a gap if you believe in yourself, so good luck figuring out what BMX XXX considers to be an official gap. Sometimes, it’s merely hopping over a flat spot sandwiched between two inclines, which I usually found by accident. Nonetheless, if that is what I must endure for a glimpse of a teat, I will do so.

You can also get a movie by getting first in a competition, but that’s a whole new level of pain. However, collecting all the objects in a level, as tedious as it tends to be, has only provided more teasing videos. Likewise, when I finally managed to find all the gaps in The Bronx, and still, not an areola in sight. This is becoming distressing. 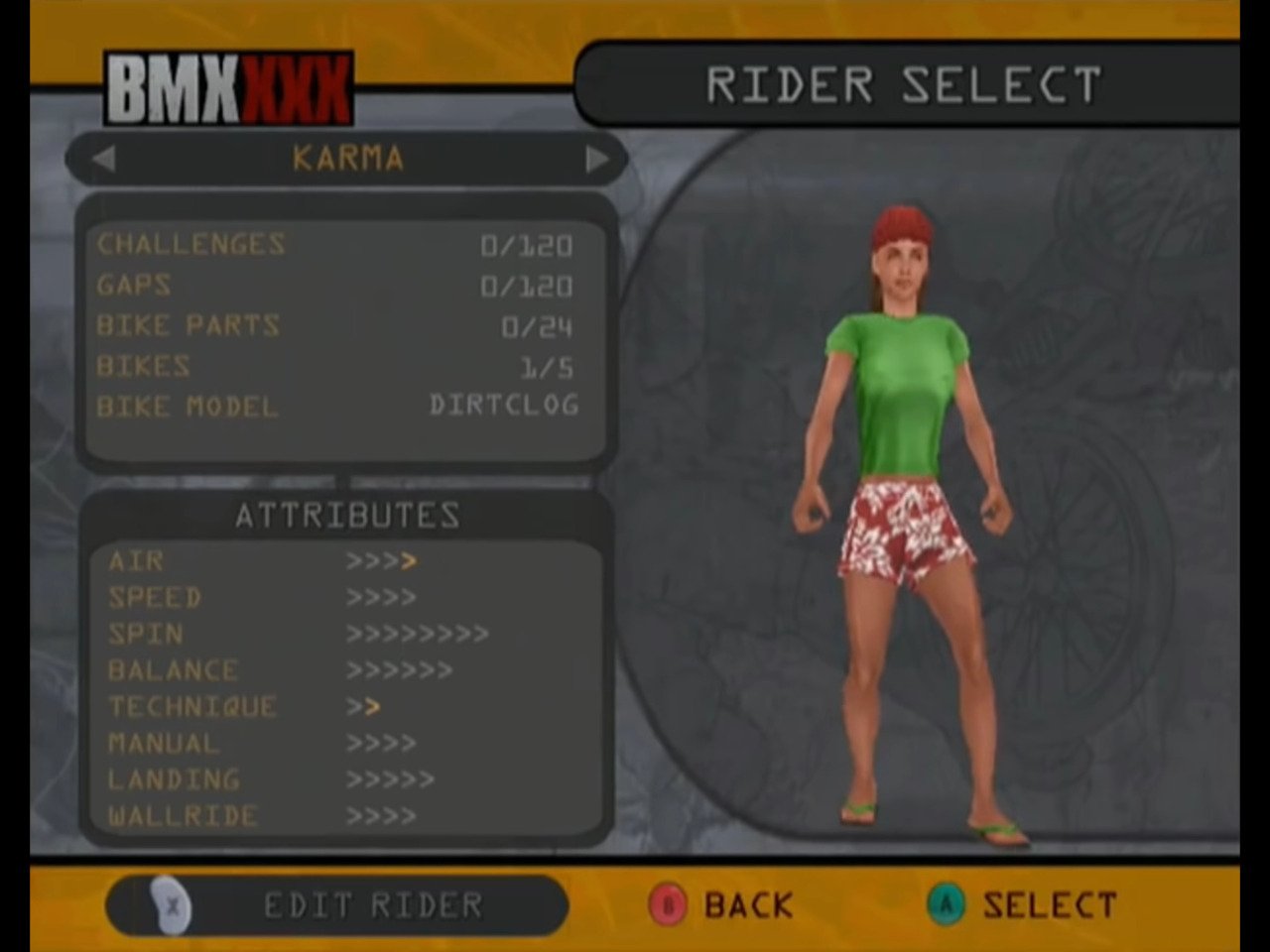 There’s actually a lot of pain that must be endured for a peek at human udders. Mainly, the game just isn’t very good. To put it charitably, it’s a serviceable THPS clone. It works at a fundamental level. However, it has more of a habit of falling over itself. The collision detection, for example, is a mystery to me. Sometimes your rider seems to bounce off everything, other times they just throw themselves to the concrete like they’re trying to get insurance money. This happens a lot with rails that can’t decide if they’re corporeal or not, but the worst instance I had was when I tried to ramp over a funbox and my rider just ragdolled. I then spawned on top of the funbox and ragdolled while trying to dismount. In a competition, no less.

Yeah, the competitions. There’s two of them. Remember those from Tony Hawk’s? It’s the same idea, but rather than taking the average of two out of three runs, you’re given two runs and if you screw one of them up, then you can get bent. Worse yet, it’s not about putting on a good show, but about using the largest repertoire of tricks. So, each event is just a matter of going down a checklist and trying to hit as many as you can. Grinds, lip tricks, wheelies, and don’t forget the modify button that makes you stick your foot out for many of the grinds and manuals. That’s important. Oh, but you still need to get enough points, because screw you.

That was honestly my biggest obstacle; those competitions. What sucked was when I’d get two 90+ attempts in a row, but three CPU competitors would somehow top that and I’d have to start all over. It really makes you question how much you want to see a pair of breasts. 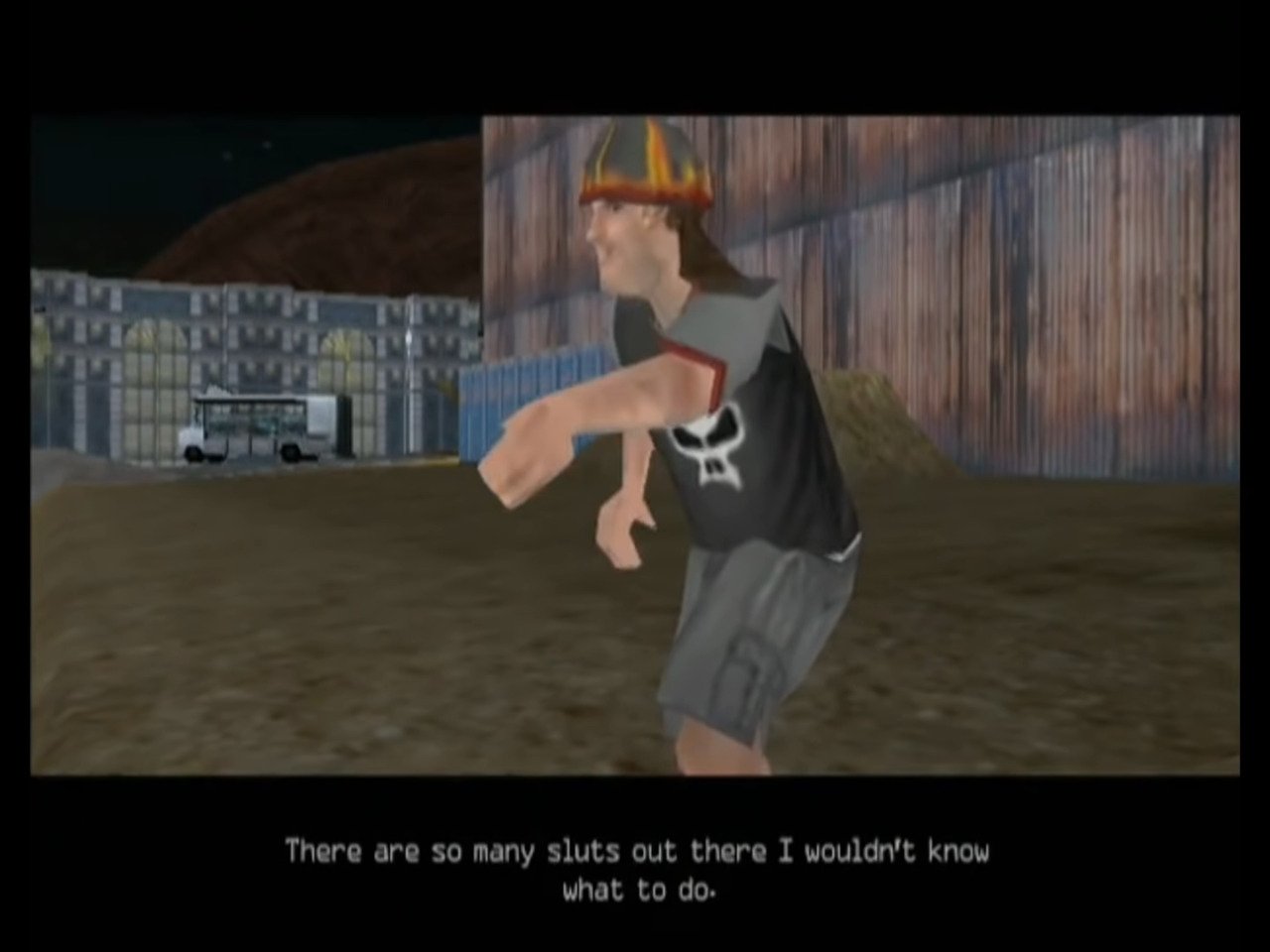 I expected worse, to be honest. The first objective I got in the game was picking up prostitutes and delivering them to a brothel. There was one goal that required you to drain a reservoir so a really gross dude could get on a party boat full of “sluts” and “score,” which is pretty de-humanizing. Just because a woman is forward with her sexuality and perhaps even promiscuous doesn’t mean she just dispenses sex to anyone who climbs aboard their vessel. Even still, BMX XXX normally comes across more as juvenile than offensive. When it actually does cross over into sexuality, it’s usually just suggestive inanimate objects, bad wordplay, and, heaven help us, dogs humping. 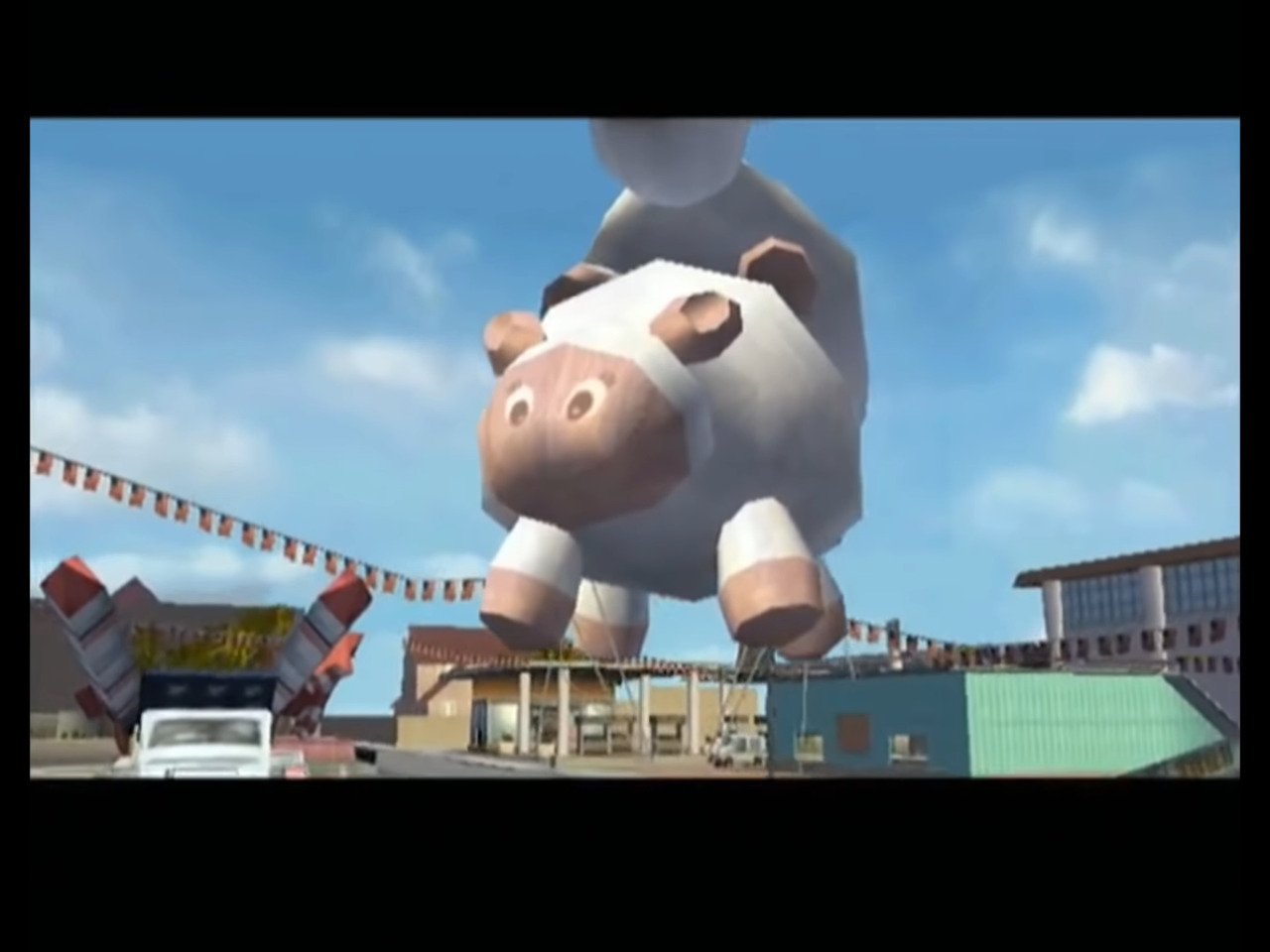 Or not. We live in a world where nakedness is easy to see. Nowadays, you can see boobs of every flavor with dizzying ease. The phones in our pocket can bring up flesh while we ride our bus route to work, shop at the liquor store, or sit in the waiting room for our psychiatric appointments. It’s definitely more accessible than it was in 2002 when I was probably still on a dial-up modem and everyone wanted your credit card information.

Besides, as it turns out, I was wrong about there being no toplessness in the character creator. After all that effort, I could have just edited my character, changed their top to “almost nude,” then hit left or right until I saw nipples. Unless you’re on the PS2 version, which was censored. I’m playing the GameCube port, and it would have saved me the pain of actually playing the game. I mean, BMX XXX wasn’t horrible, it was just terribly mediocre, and the only reason I tolerated it was because it dangled its funbags in front of me. I’m only human.