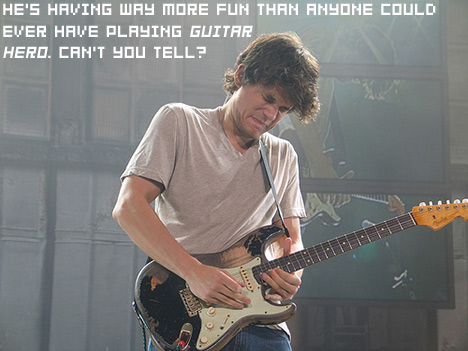 I’ve always wondered what musicians thought of music/rhythm games like Guitar Hero and Rock Band. Like, do they feel as if it’s a shoddy knockoff and an insult to their life’s work? Or do they think it’s really cool to let everyone feel like a rock star, and do they wish their music was in it?

Five-time Grammy winner (and Rolling Stone-sanctioned “New Guitar God”) John Mayer is apparently in the former camp. According to CVG (via Entertainment Wise), Mayer told Rolling Stone that he is anti-Guitar Hero because he feels that it makes it easy for people to pretend that they’re, well, actual guitar heroes:

Guitar Hero was devised to bring the guitar-playing experience to the masses without them having to put anything into it. And having done both, there’s nothing like really playing guitar. I mean, what would you rather drive, a Ferrari or one of those amusement-park cars on a track?

I absolutely love John Mayer’s music — I own his first EP and his three studio albums, and I saw him in concert twice last year — but I’ve always been annoyed and angered by what I like to call the “go play a real instrument” people. I’ve been playing the guitar for about six or seven years now, and while I agree with Mayer in principle — that the feeling obtained from mastering a song in a music videogame doesn’t come close to the elation you get from doing so on the real instrument — I also understand that it’s a game, and I don’t see any problem with letting regular people feel like they’re rocking out. After all, isn’t that what videogames are all about? Living vicariously?

In any case, this saddens me, because I’ve always wanted to see some of John Mayer’s music in Guitar Hero or Rock Band. Oh well. For some reactions from my colleagues, hit the jump.

[Via Entertainment Wise by way of CVG — thanks, Adam!]

Adam Dork: Don’t most musicians have trouble playing Guitar Hero? Maybe he is just upset that they wouldn’t include any of his songs in the game.

Samit Sarkar: I actually agree with him, in a way. I mean, the “go play a real instrument” people always pissed me off, but he’s right — I play the guitar as well as Guitar Hero / Rock Band, and strumming away is pure bliss. Plus, it totally gets me all the hot chicks.*

Also, how could you call him a jerk? He’s so dreamy…

Nick Chester: This claim is bullshit, and there’s no comparing the two. It’s like Larry Bird calling shit on NBA Live, or Mario Andretti talking shit about Gran Turismo. I can play guitar, bass, drums (poorly), and can sing. I have done all of those things with human beings, including studio recording and live shows (clearly never to the extent or success of Mayer, mind you). I’m not using one experience to replace the other or give myself a false meaning of talent or purpose any more than I think GTA IV has prepped me for a life of networking with criminals.

I don’t mind Mayer, and he’s a talented, generally funny and seemingly likeable dude. But this is just stupid, and I think even he probably knows that.

Colette Bennett: He sounds like a raving douchelord to me.

Alan “Gameboi” Johnson: Mayer can play the hell out of a guitar, but I agree with Nick on this one (even if I can’t play in real life). What the man said was self-righteous bullshit.