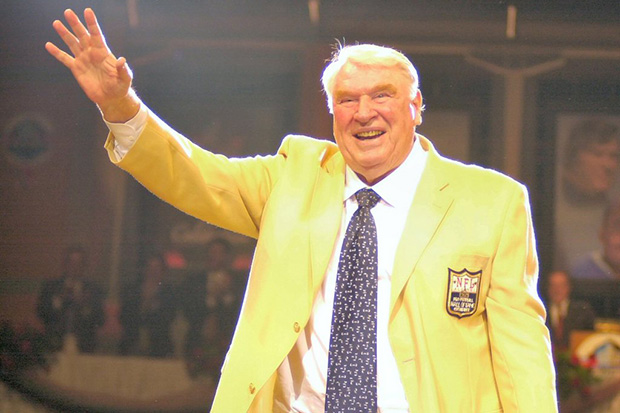 After a storied football coaching tenure and an even more impressive and prolific career in the broadcast booth, John Madden has decided to retire at age 73. Madden noted that he is in good health, but he wanted to spend more time with his grandchildren, and felt that the time had come for him to call it quits:

Madden began his football career as a linebacker coach for the Oakland Raiders in 1967; two years later, he was promoted, becoming, at 33, the youngest head coach in what was then the American Football League. He led the team to its first championship in Super Bowl XI in 1977 and compiled a 103-32-7 record before retiring from coaching in 1979. Madden joined CBS as a commentator later that year, and in the three decades since, he became one of the most beloved and respected broadcasters in television history.

When CBS lost the rights to NFL broadcasting in 1994, Madden switched over to FOX. He worked there until February 2002, when he left for ABC’s Monday Night Football. Finally, in 2006, he moved to NBC, becoming the first sportscaster to work for all of the “Big Four” American television networks. His last game was this February’s Super Bowl XLIII; longtime NFL analyst and former wide receiver Cris Collinsworth will replace him in the booth.

Madden is a member of the 2006 class of the Pro Football Hall of Fame, and in his 30-year broadcasting career, he won 16 Emmy Awards for Outstanding Sports Analyst/Personality. The venerated football videogame series that bears his name, Madden NFL, is the all-time best-selling videogame franchise with over 70 million copies sold. So what does this mean for the games? Hit the jump for statements from EA Sports.

Peter Moore, the President of EA Sports, had this to say:

John is a true sports icon who has made an indelible impact on the sport of football which will be felt forever. His prolific coaching and broadcasting careers, as well as his distinct role in shaping the EA SPORTS football experience have redefined how multiple generations have come to know and love the sport with unrivaled passion. We’re excited to see his legacy live on in the 21st year of Madden NFL football, and well beyond. It’s been a privilege for EA SPORTS to have had the strong relationship we’ve had with John for more than two decades and one that will continue into the future.

When we contacted EA Sports for comment, here’s what Senior PR Manager Rob Semsey told us:

EA SPORTS continues its strong relationship with John Madden and will continue to produce new versions [of] EA SPORTS Madden NFL with John’s collaboration. His retirement has no impact on EA, other than us wishing him the very best in this next stage in his life. He’s earned the time off.

We will continue to work with John, as we have for years, on the making of Madden NFL. His role has evolved over the years through the creative development process of the game. That will not change any time [sic] soon.

In other words, suffice it to say that Madden’s name will live on in videogame form; Madden NFL isn’t going anywhere. Look for Madden NFL 10 to hit stores on August 14th, right on time for the start of the 2009 NFL season.