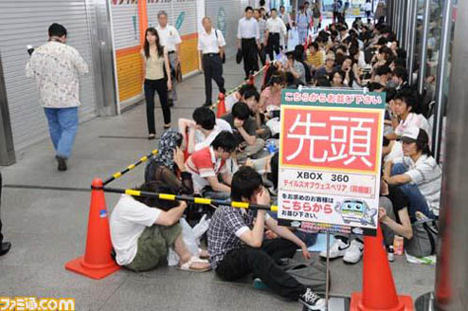 Take a good, long, lasting look at the above image folks, because it’s not something you see every day, and it could be something you’ll never see again. That is a bunch of Japanese people lining up for an Xbox 360 game — just when you think you’d witnessed it all.

This is of course for Tales of Vesperia, with customers patiently waiting at the Akihabara Yodobashi Camera to get their hands on this exclusive new JRPG. Certainly not the biggest launch in the world, but for a 360 game, it’s is as stellar as anybody could imagine.

This morning’s launch was accompanied by on-stage antics that included producers Yoshito Higuchi and Tsutomu Gouda, the latter of which quipped: “Even though the Olympics are starting, everyone please enjoy playing Tales of Versperia.” Pro wrestler Wataru Sakora was also present for the event.

Although hype for Vesperia isn’t as mad as it would be had the game come out for the PS3 or Wii, a “steady stream” of 360 consoles are reportedly being sold. And all it took was a Japanese game in a Japanese genre made by Japanese people to do it.