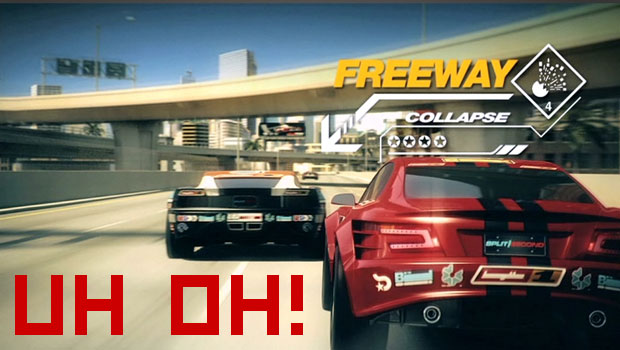 So I’ve been hearing things for awhile about the upcoming game that Black Rock Studios, the folks behind the excellent off-road racer Pure, was working on. The first part of the rumor had it being a racing game, which wasn’t surprising. The other half of the rumor said it would packed with destruction — both environmental and vehicle — that would blow minds. The “Burnout Killer” people said.

Last night, GameTrailers TV had an exclusive first-look at the game in question, called Split/Second and coming to the Xbox 360 and PlayStation 3. To say it looks “incredible” is an understatement. While I’m not sure how much of what we’re seeing is in-game and not pre-rendered, the ideas are there, and they’ve got my attention. A collapsing bridge; the entire front end of cars being torn to shreds; an exploding gas station; fast cars. Throw in a free bag of Skittles with every purchase and you’ve got my sale, for sure.

How closely the game will play to Criterion’s Burnout series (from the trailer it looks like the environmental stuff may be player-triggerer) remains to be seen. But whether or not Black Rock is gunning to snatch Criterion’s “King of Arcade-style Racing” title, one thing is for certain: Split/Second definitely looks kick ass.

You can check out the full trailer in HD over at GameTrailers, and you definitely want to do that.