My last iPhone review blitzkrieg left my phone-hand tired and my mental facilities numb. I became aware that the iPhone has the propensity to have both bright, vibrant and decently fun games. I was also shown just how cheap and flimsy they can be as well. Recently, I’ve had a chance to test a sampling of publisher Project X’s offerings. Overall, I am fairly disappointed.

I should have known that I would be displeased with the titles. When I plugged my iPhone into iTunes after downloading the games, my iPhone stopped working. It froze and refused to accept the goodies that Project X bestowed upon me. After several hard resets and three memory clears I was finally able to play. The problem is, the games I went through all the memory wiping work for were Critter Crunch, Pinball RC, Reel Deal Slots, and Reel Deal Texas Hold’em.

Hit the break for all of the reviews. 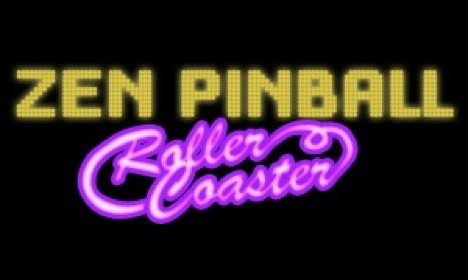 Zen Pinball is the epitome of all the reasons I dislike the majority of mobile titles. It’s small, lacks ingenuity, has annoying sound, and terrible menu navigation. Upon booting up the game you’re greeted with a pinball machine. This is also where the game ends. It is just one pinball machine with the same lights and colors every time. I usually don’t pick on color choice, but the pinball “board” looks like someone puked grape Kool-Aid and glow sticks all over it. Very unappealing considering that this is the only thing users are going to see while playing the game.

The mechanics are as simple as you can imagine. A ball is magically launched, and it’s the player’s job to keep the ball afloat while it gathers points through jackass physics. There are three bumpers in the game, each controlled by a thumb flick in its respected corner. The response is usually fast, but having to cover up a portion of the machine with your thumb to hit the ball certainly hinders your performance. Also, the bumpers occasionally get stuck in the up position, at which point you have to manually reset them with your thumb. Perhaps it’s the developers creating a reality device in an attempt to make the game feel as old as it looks. Interestingly, the iPhone’s tilt functions can be used to tilt the table, but never for a good reason.

When you accidentally double-click the machine, you get one of the worst game menus in recent memory. Users can rotate the camera to a degree from this, but it’s highly inadvisable. The camera just eats away at the play space instead of presenting the board differently. I noticed that after the credits I was shown that the game had several different modes of play, but I couldn’t find them. Why the hell would you do that? I thoroughly suggest you stay the hell away from this game. 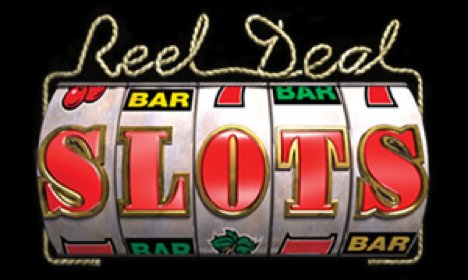 When I first opened up Reel Deal Slots I got really excited. After a few seconds I realized that I read the title correctly and was promptly dismayed. After playing the game I nearly wanted to beat my head against the wall. Reel Deal Slots is a lot like Zen Pinball except it’s flashier and has two more boards to choose from. If you’re familiar with slots (you know, the free mini-games inside of games like Mass Effect) then you already know Reel Deal Slots. In fact, if you can just visualize a bunch of spinning pictures and fake money then you know Reel Deal slots.

The thing that really gets me is that the game has three boards to choose from and two of them have the same theme. “Bad Girls” and “Riccochet” are both based on cowboys, haystacks, whiskey, and guns. Those two boards are brown and boring, much like the entire experience. The third board, “Riches of the Rainforest” is vivid and very purple.

You play the game by betting on little icons at the bottom of the screen and watching the slot machine doing its magic. The money won or last doesn’t last through a play through, so there’s no point in trying to earn a fortune either. Essentially, the game is very bland and a waste of your real money. 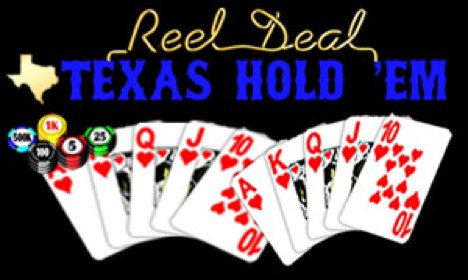 Reel Deal Texas Hold’em has a ton more kick than its counterpart, but I suppose any game with more than two colors and gameplay mechanics would. As you can ascertain by the name, this game is all about the once popular Texas Hold’em poker variant. Unfortunately, Reel Deal Texas Hold’em doesn’t have any of the excitement of a real hand or cards, nor does it have enough appeal to keep anyone hooked.

The game begins by making you pick an avatar from a list of uninteresting characters. The guy I chose was Nick, because my boss has the same name. I love him. Also, here’s a section of the terrible writing sampled from the profile of Nick.

You never know what to expect from Down under. This kid’s got a stack of chips so high, you can bet two to one that he’s been racking up the cash advances on his mother’s credit card…He’ll earn it back.

Awesome, I’m glad he’ll pay it back, Reel Deal Texas Hold’em! After picking the avatar, you’re quickly ushered to a bland and green table with $1,000. Cards are folded by putting your thumb over them and flicking forward. Best and raises are handled by swishing left to right on the top of the screen. I was surprised to find that the AI was fairly responsive and capable to my rogue playing style, Regardless, the presentation is fantastically boring. After you make your bet, the AI slowly decides whether or not to bet and fold. If you decide to fold pre-flop, then the real waiting begins. There is a fast-forward button, but it lacks the quickness that most web-based applications have with real users. There are no tournaments, little portability, and the music is atrocious. At some point, I can only hope there will be a better Hold’Em offering for the iTunes store. 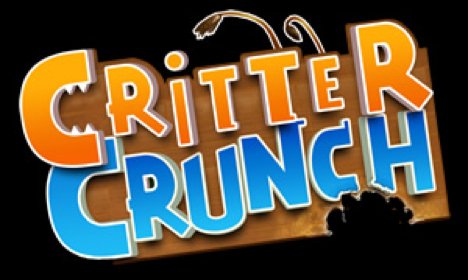 Critter Crunch steals the Publisher X show, which isn’t hard considering its competition. Critter Crunch is a colorful puzzle game featuring an adorable creature that suffers from bulimia. The objective of the game is to use your creature’s exceptionally long and vertical tongue to capture smaller creatures and feed them to larger creatures to make them pop and rain down jewels. Through the course of the game you are introduced to different variants of creatures and different combos and obstacles. The game is particularly straight-forward in this regard, and holds your hand with each new game mechanic thrown your way.

The game is controlled by placing your thumb on your creature and guiding it horizontally across the screen. Often I was discouraged by the response time of the creature and the relatively slow crawl that the game expects of players. If you move too fast, the creature will just look at you and you’ll lose very quickly. The big downside of the game is its amazing ability to crash. After several hours of play (and several crashes inbetween sessions) the game will no longer boot. I suspect if I wipe the data from my iPhone the game will work again, but who should really have to do that?