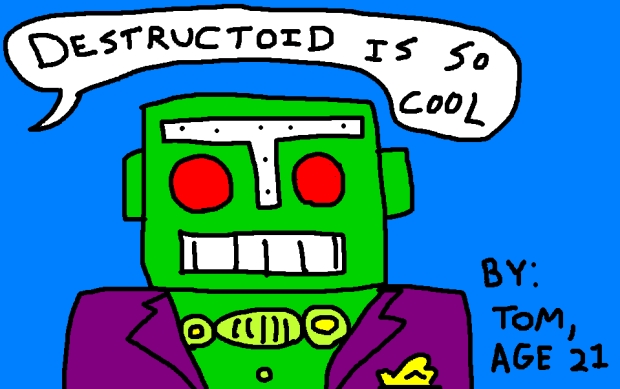 …”: Race Around the World,” the headline would say, if Elephant’s character limit weren’t so painfully brief.

Of course, I don’t have to tell you that. You’ve already played RunMan: RATW, right? Right? I don’t want to be rude, but if you haven’t, you’re a complete toolbag. That’s all. I’m not saying you’re an awful person or anything, but Jesus. Maybe one of the best platformers I’ve ever played, indie game or no.

Assuming you aren’t a complete toolbag and have played (and subsequently enjoyed the hell out of) RunMan: RATW, you may be interested in reading this interview I did with Tom Sennett and Matt Thorson, the guys who created the game.

Then again, you may just be interested in playing the game again and ignoring this interview entirely. Up to you, really.

DESTRUCTOID: What made you guys decide to collaborate on this project? You seem to have worked on most of your other games alone. Can we look forward to more Matt/Tom collaborations, or was this a one-time deal?

TOM SENNETT: For me, this was really just a flagrant attempt to piggyback off Matt’s popularity. I think it worked, and I’d do it again.

MATT THORSON: I just like Tom’s style – how carefree his stuff is.  I say this in the most complimentary way possible: working with Tom reminds me of how I felt working on my first game.  We don’t have anymore Tom+Matt games planned right now.

DTOID: A fair number of bloggers/players/whatever have mentioned that RATW feels very Sonic-esque, except not awful or involving werewolves. Was this intentional?

TS: Yes. Werewolves and awfulness were actually planned features that didn’t make it in due to budget constraints.

MT: Sonic didn’t inspire me even a bit during development of RunMan.  I actually don’t like the Sonic games at all (not even the old 2D ones).

RunMan: Race Around the World Release Trailer from Tom Sennett on Vimeo.

DTOID: The game took four years to make, contains more than 35 levels, and is good. Why’d you decide to release it for free?

TS: We just want everybody to play it! Also, the plan is to get your money later, through RunMan t-shirts, plush toys, fruit snacks, and running shoes. And RunMan: The Movie.

DTOID: Can you give any info on how useful the donation system has been, especially in relation to the number of pure downloads?

TS: Let’s just say that a whole lot of people have downloaded and not donated. And that’s fine. We probably wouldn’t have gotten their money if we’d tried to sell it anyway. This way the game at least gets played, and that’s what really matters.

The people who have donated are the coolest people in the world, though.

MT: Yeah I think that with RunMan the donation model was the best way to go.  It fits the spirit of the game, and also just makes us out to be really generous, awesome guys.  Helps our self-esteem.

DTOID: What, for each of you, was the biggest mistake you made during production that you learned the most from?

TS: I would say our biggest mistake was hanging on to the same code we started with for the duration of the project. The demands and scope of the game’s design transformed significantly between the beginning and end, and the development took such a long time, so we ended up with code from four years ago that was redundant or clunky or incomprehensible. We probably could have saved a lot of headaches and cut the development time in half with just a bit of planning. Oh well, we were young and reckless.

MT: Yeah, I’d agree with Tom on this one.  I’m thinking of releasing the source on my forum at some point, so people can make their own stages or whatever, but the sheer messiness of it might scare everyone off.

DTOID: Any possibility of pulling a Derek Yu and releasing an enhanced version of the game on one of the downloadable networks? What’s next for you guys in general?

TS: My plan is to hook up with some programmers so I can focus on design and art. I’d like to mess around with the iPhone and some console stuff if I can get my hands on it. I’ll also probably keep working on Flash games.

As for an enhanced RATW, I would say don’t hold your breath. I’d much rather just make a brand new RunMan game.

MT: I think we’re done with RATW.  Next I’m going to likely do a few small-ish Flash games to help pay my tuition, and at some point a larger downloadable project.  I’m also just starting work on another collaboration on the side that I’m not sure if I should talk about yet.

DTOID:  Favorite game of this year that you didn’t have anything to do with. Go.

MT: I really don’t have a single favorite but some recent games I’ve enjoyed have been Star Guard, Beacon, Canabalt, and Time Fcuk. I’m looking forward to Super Meat Boy and the iPhone version of SkullPogo.

DTOID:  Are you serious about RunMan plushies? I know at least two girls named Ashley, or some derivation thereof, who would buy one at the drop of a hat.

TS: Haha, probably eventually, still trying to just get the game out there for now.