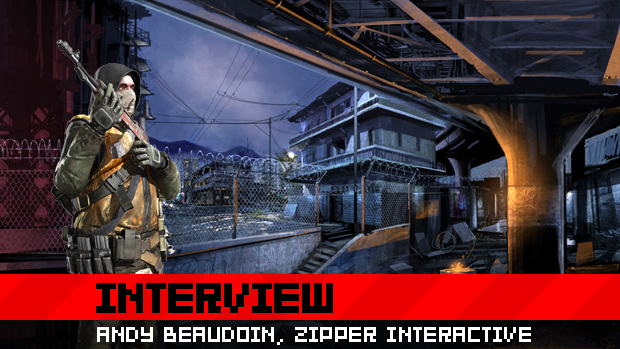 MAG is starting to look like one of the biggest things to hit the shooter genre in a long time. The massive amount of players on huge maps working toward common goals is very ambitious and I was very impressed by what I saw last week.

It did leave me with some questions, however, and I was very fortunate to get to speak with MAG‘s lead designer, Andy Beaudoin. Hit the jump to get a little bit more detail on what players can expect from the game, where it might go in the future and the challenges of creating a game on such a massive scale.

What are the big challenges of creating something on this scale? 256 players is huge. What were the issues that you had to address right away?

I think that there are a couple of challenges. I mean, earliest on, it was trying to figure out how you create really unique gameplay around there. There’s nothing out there to look at as an example of, “Ok, these guys have gone this way, we just need to tweak that a little bit.” When you start to get to those large-scale numbers the old paradigms just don’t work anymore. You can’t just do a 256-player Capture the Flag battle. It’s [sic] not going to play to the strengths of the scale of the game and that also is where you can get super, super chaotic.

Probably the second challenge was just in testing it and refining it. We have maps built around 256 players, that’s a lot of bodies to get together to refine and fine tune. We’ve been fortunate enought that — we obviously don’t quite have enough here in the studio to help out but also using other Sony studios to help out with the testing.

The squad-based organization seems to be geared toward keeping things still compact. Is it really just eight players operating, essentially playing their own game while all the other game is going on around them or do you view it as a true 256 player experience?

No, it definately is a full 256-player experience. The breakdown is essentially at the initial point. Obviously, we don’t want 256 players flipping the same switch. But the games all share a common goal, whether it be destroying an enemy fuel facility in our larger games or stealing two transports in [the demo on display at this event]. The breaking down of the squads is really how the battle starts out and as you get closer and closer to that final objective, like spokes on a wheel, all of those things start to come together at that central objective.

How long do you expect the average engagement or game session to last?

We’re still tuning time frames but we’re looking at around the thirty minute time limit for a large game. The smaller ones will have a somewhat shorter time frame so you can jump right in and play quick action or we can have the more epic battles.

The metagame, which you’re calling “The Shadow War,” what role will Zipper have in the story progression? Is there going to be some overarching narrative involved there?

We still have a lot of things to do on what happens after we go live, a lot of plans that we’re making, but we’re basically just setting the stage. We’re setting up the game rules and we’ll tune them so that this many battles is really how you turn the tide in The Shadow War but we’re hoping that a lot of the players…

We’ll set up the rules and we’ll let the players come up with their own techniques. Maybe they’ll play normally or maybe certain clans will want to focus on certain game modes on certain nights of the week or try to counteract what the other teams are doing. But we definately like to look at ways after we go live, after we see those things unfolding to progress the story and add to that.

What are some of these logistical elements? How will victory or defeat impact the individual PMCs?

We haven’t yet released a lot of that information and we’re going to wait a little bit for most of it but our plan has always been that you as an individual still feel a direct benefit. Maybe additional experience points, some other additional items available to you. And then on the squad level, platoon level and the whole team level, maybe you’ll potentially have better surveillance assets or things like that. There are a number of in-game elements that we want to provide without, obviously, overbalancing things.

With the experience system, what sort of benefits can players expect to receive due to dedicated play?

When you start out the game, we give you a couple of base options that are extremely effective. You aren’t coming in with a Nerfed gun by any means. And then as time goes on, really what you’re doing is specializing. You’re opening a lot more tools, a lot more kits, a lot more playthings. You’re also developing some personal skills, maybe in how you react to explosives or how quickly you can defuse charges and things like that. All those things that really help you play as a better soldier.

And then we have a lot of options out there and lots of different ways to play. When you make those choices then, eventually, if you do focus in one area and specialize we give you that moniker that maybe you’re a sniper if you put all your points into the marksman tree. Maybe you’re an engineer if you put all of your points and skill into the repair and support roles. And then that lets us give you identification to other players and we can use that in our matchmaking.

When you start up a game for the first time, you’re going to select a PMC to join. Is that it or will players be able to defect to one of the other companies?

We are certainly planning on having defection as an option somewhere down the road.

Do you think it can be an enjoyable experience simply as a lone wolf player?

Absolutely. There are days when I just don’t feel like talking to anybody and when we go into playtest, I just strap on a silencer, get a P90 and my whole game is around getting behind enemy lines and taking out snipers. And I have a great time with that. But, at the end of the day, I’m helping out my team because I’m taking out snipers.

So, unless you’re really standing off to the side and staring at the sky longingly, you’re definately helping your team. And, even then, you’re giving them one more target to shoot. So it’s really hard to play and not help your team out in some way. So, even as a lone wolf player, you’re going to have a great time.

Best case scenario for MAG: How do you envision it?

Obviously, we sell lots of copies, and we just have a lot of people who enjoy that we’ve created a new type of shooter. I mean, it’s a whole different type of game. At the end of the day, you still have a rifle but the experience is like nothing else out there. You’re playing different.

If you look at all the different shooters out right now, I love them, they’re a lot of fun, but they’re all permutations of “seek and destroy” and “capture the flag.” And there are elements of that in this game as well but the scale is so much bigger and there’s so much more variety in how things play out that it’s a whole different game.

I really appreciate you taking the time to talk with me today.