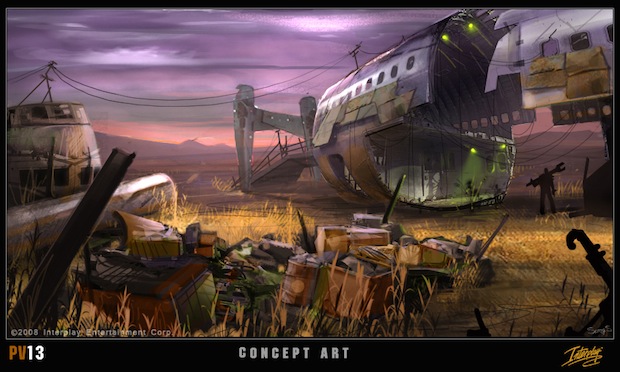 If there’s one good thing about all this legal mumbo jumbo between Bethesda and Interplay regarding the Fallout MMO, it’s that we now get to see what Interplay is actually doing with the property.

Recently, Interplay’s Chris Taylor released four bits of concept art from the MMO on the studio’s official message board, which requires a membership to access the proper sub-forum. Dated 2008, the images, we’re reminded by Taylor, are not final — just concepts being used for the development of the title.

As one would guess, these images reveal a post-apocalyptic world rife with fractured buildings and objects sitting on top of a scorched earth underneath a sky blotted by debris. The lone image of a survivor, a dude with hip goggles and a smooth tan jacket, does give off that signature Fallout feel.

As for why these images were revealed, Taylor writes that they’ve been “released due to the lawsuit” in the initial thread about the concept art. In the same thread, Taylor mentions he’ll continue bothering the lawyers to release more images, which would makes us happy pandas, as opposed to the sad variety.

So, Fallout MMO — apparently it’s still happening. What do you guys think about these images?