[Editor’s note: SWE3tMadness talks about how Guitar Hero has helped her become a better plastic guitar rock star for her Monthly Musing. — CTZ]

(Author’s Note: This post is true for all Guitar Hero games, as well as Rock Band, but since GHIII is the only one of the series that I actually own, I’m using it specifically for my examples.)

I don’t have that many games in my library to begin with, thanks to my college-student-sized budget. Before I actually get a game, I have to be almost 100% certain that I’ll play it over and over again to justify the price. And boy, have I gotten my money’s worth out of Guitar Hero III.

But why do I play it so often? In fact, I just finished up a session on it before coming up to write this. After pondering my borderline-obsession with the game for a while, I’ve come to the conclusion that it’s a combination of two things: GHIII is one of the few games I can do very well in, and it’s FUN to practice. Those factors go hand-in-hand: I’m good at it because I’ve practiced so much, and I practiced so much because it was fun to play when I first started.

Most games I’m not too talented at because I get frustrated and stop trying to improve. There have been a few exceptions, Super Smash Bros. being the most notable, but for the most part, if I’m not having fun and don’t feel like I’m improving, I just give up on it. Guitar Hero first attracted me because it gives you specific benchmarks for how well you’re doing. If you beat certain songs that you couldn’t pass before, you know you’ve improved. If you hit more notes, and can do it more consistently, you’re improving.

Because I could easily see my progress, I kept wanting to work farther into the game – past Easy, then Medium, then making the jump to Hard and Expert. Also, it keeps track of your progress in certain sections of individual songs, so it’s far simpler to know what to work on when you’re trying to progress farther. If I see that I’m missing parts with lots of heavy chords, then I need to work on that particular skill. Then, when I do succeed in passing a hard song that I’ve worked seemingly forever on, the satisfaction is incredible. When I passed my first Expert song, I was so happy, I showed it off to everyone I could find! I didn’t care for once that my younger brother had passed it months before; I was excited that I had just made it that far with the power of my own two hands.

Next, Guitar Hero is fun to play (for the most part … ). Like I mentioned earlier, because you can actually tell when you’re improving, it doesn’t feel like you’re just grinding through it. And despite what the nay-sayers of the series claim, there’s nothing wrong with pretending you’re a rock star. There are a lot of songs that I love on the GHIII setlist, like “Welcome to the Jungle” and “Knights of Cydonia”, so the chance to actually connect and feel like you’re playing these songs through the game makes it more fun, and more fulfilling when you do well on them. 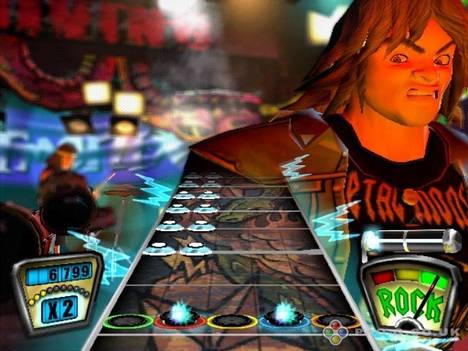 It’s not like I lack the talent to play anything other than a plastic guitar either. I’ve been a pianist for almost twelve years, and I’m a pretty damn good one too. But when I can’t show off my musical talent with the piano, my friends and I pull out Guitar Hero and challenge each other to see who’s the best. Even if we all suck horribly, we still have fun with it as a party game. That’s another incentive to keep playing even when no one’s around as well. I want to improve so I can show off to my friends.

Of course, there’s always a few exceptions when it’s no longer fun. As I say sometimes: there are things that are challenging, but enjoyable, and then there are things that are just challenging. If I’m not improving at a song, or convinced it’s impossible to pass (with my own talent, that is), I’ll give up. Again, if I’m not feeling like I’m improving, it’s not worth it for me to try any more (*cough*”ONE”*cough*).

Because all these things have kept me coming back to Guitar Hero and I’ve gotten pretty awesome at it. I can pass everything on Expert up to about the seventh tier, and have gotten five-star rankings on nearly every track that I’ve passed. But while I can show off my talents now, I know that I never would’ve made it to Expert if Guitar Hero didn’t keep me coming back to practice time after time. If anything, it’s the knowledge that I’ve come this far, and still have farther to go that continually drives me to improve. I may not ever beat my younger brother or make it to the leaderboards, but Guitar Hero is one of those games where I feel like I’ve accomplished something and continue to add to those accomplishments – even if it really is just hitting colored buttons on a plastic guitar.

Now, if you’ll excuse me, I have some work to do.