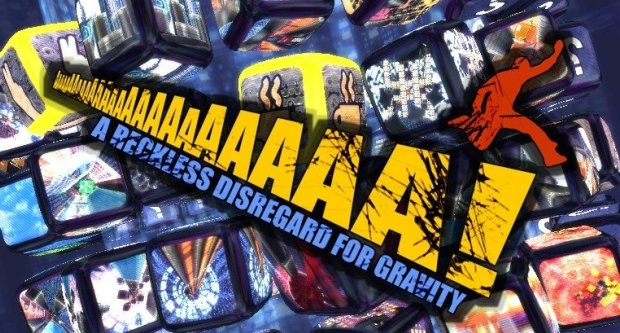 “Indie Nation” highlights interesting games from the independent scene. Series installments are written pretty much whenever we feel like it.

I’ve tried to start this post about a dozen times, forever attempting to write an opening sentence that begins with, “imagine a game where…” before descending into confusion and unhelpful metaphors. Maybe this game is like the exact opposite of Jumping Flash, I thought. Perhaps it’s a skydiving game mixed with retro, high score-hungry sensibilities. Maybe it’s the Battletoads wind tunnel level turned into an entire game, only it’s in 3D.

In reality, though,  AaaaaAAaaaAAAaaAAAAaAAAAA!!: A Reckless Disregard for Gravity is none of those things. Or, maybe, all of them. All I can say for sure is that it’s a game about jumping off the tops of buildings, falling as close to other buildings as is perilously possible, and flipping off spectators as you plummet to the earth. Oh, and it’s quite fun. That, I can say for sure.

It’s also got one of the coolest release formats I’ve seen outside of Mount & Blade. The full game is technically scheduled for a Q3 2009 release, but is available for preorder now. Doing so will not only get you a discount of ten bucks off the eventual $25 launch price, but will also net you a download link for what the developers have humbly dubbed a “pre-release demo.”

This “demo” comprises nearly half the full game; thirty of the eventual eighty levels. You can preorder the game here, or hit the jump for my impressions of the demo.

Just in case I hadn’t used enough poor analogies before the jump, watching the below gameplay trailer made me think of another. A Reckless Disregard for Gravity is sort of like Burnout: if you’re not constantly feeling the anxiety of being an inch away from death, you’re not playing it right.

Players earn points by getting dangerously close to buildings, smashing point plates, and flipping off protestors — all while plummeting to the ground, feet-first. Despite what the immensely fast-paced gameplay might initially lead you to believe, AaaaaAAaaaAAAaaAAAAaAAAAA!! rewards finesse and skill over all else. It’s not just about the exhilarating fun of flying to the ground at terminal velocity; it’s about looking damn good while you do so. Any schmuck can fall; it takes a skilled player to fall with style.

Levels contain multiple routes and allow for multiple scoring strategies, which surprised me quite a bit. You wouldn’t expect a game as seemingly linear as this to afford the player as much strategic choice as it does; do you want to go after the point plates and use your triple-shot powerup to double the score you receive from them, or do you want to focus more on hugging the buildings? Which route will you take to get to the end?

The level design seems pretty solid based on the levels I played, which is a relief. Even though every stage tasks you to basically accomplish the same goals — fall, score, don’t die — they still feel individually varied enough that I never felt bored. One stage might task you to follow a twisting chain of point plates down to the landing pad, while another might challenge you to fly as close as possible to a mountain for as long as possible before finally deploying your parachute. Some of my favorite levels involve alternately flipping off and giving thumbs-ups to  protestors and fans as you plummet past them.

It may not come as much of a surprise given the title, but AaaaaAAaaaAAAaaAAAAaAAAAA!! also possesses a tremendous amount of character. The level descriptions in the main menu tell behind-the-scenes stories of the game’s development, or make charmingly unrelated jokes (the description for one unfinished level reads, “people who tell you to press alt+F4 for God mode are assholes”). One level, buyable for 3000 “teeth” (the currency one earns by performing well), unironically functions as a noninteractive meditation aid. A blurry visualization of a typical level appears onscreen as a relaxing voice tells you when to breathe. It adds nothing to the gameplay, and can actually feel like sort of a gyp once you’ve paid for it. But it’s bizarre. It’s got personality. It’s different.

Analogies aside, maybe those last three sentences are the best way to describe AaaaaAAaaaAAAaaAAAAaAAAAA!!

There’s only one thing that really bugs me about AaaaaAAaaaAAAaaAAAAaAAAAA!!, but it’s a relatively large thing: the campaign progression. Rather than just unlocking new levels as you complete old ones, you’ve gotta purchase new levels using the aforementioned “teeth” points. Getting a five-star ranking on a level nets you so many, getting a four-star earns a little less, and so on. In theory, this structure ensures that the player will not progress to new levels until they have learned the necessary skills to achieve high scores in previous stages. In practice, it just made me feel that no matter how well I was doing, I wasn’t doing well enough. Though I received four-star rankings on the nearly all of the first twenty levels I played, I was perpetually only a few hundred teeth away from total bankruptcy. I was only barely able to afford new levels, even though the star-based grading system suggested I was actually doing well.

As such, I didn’t get much of a chance to feel the sheer thrill and intensity of some of the better-designed levels as I was constantly worrying about getting a decent star rating. AsI flew through the air with reckless abandon, I couldn’t stop myself from worrying if I would get enough teeth to advance to the next level, or if I’d have to spend the next few hours redoing previous stages to get more cash. I would liken this to worrying about one’s taxes while driving in a demolition derby. If the game were structured in a more conventional sense (say, where a new level is unlocked so long as the player achieves greater than a 3-star ranking on the preceding level) I think I would have had a much more enjoyable time.

Even with the unfortunate level structure, though, it’s still a damn enjoyable, and damn sizable demo. If the above video interests you at all, I’d highly recommend preordering the full thing if only for the 30-level demo.