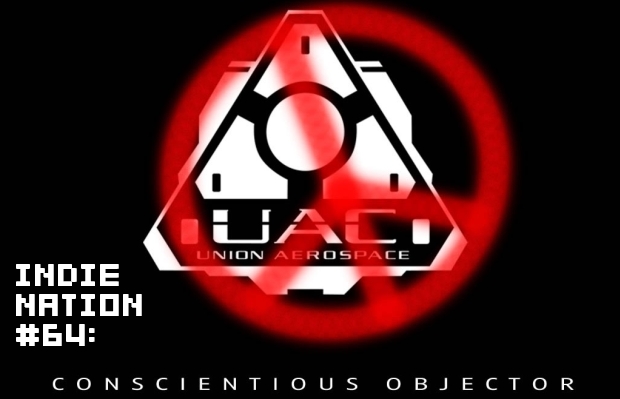 Conscientious Objector is a Doom 3 mod by thechineseroom, the same academic group who created Dear Esther. Despite the fact that Dear Esther couldn’t possibly be more stylistically or mechanically different thanObjector, both mods exhibit the same bravely experimental deconstructionist attitude toward the first-person shooter genre.

Where Dear Esther sought to provide a uniquely interactive-but-sort-of-not narrative through environmental and audio cues, Conscientious Objector serves as an inversion of the typical first-person shooter in nearly every sense.

Firstly, you can’t kill anything. Ever. Secondly, rather than receiving positive reinforcement or general instructions from a support character, you are constantly insulted and belittled by a handler who threatens to kill you if you do not follow his instructions.

Where a game like Doom 3 or Half-Life 2 seeks to empower the player in nearly every way possible, Conscientious Objector robs the player of that power. Where regular FPS games attempt to satisfy the player through meticulously designed levels that typically culminate in some sort of violent catharsis, Objector is a grueling, thankless gauntlet of terror.

Not to suggest that the game is boring, or outright unpleasant to play. Conscientious Objector merely attempts to take all those emotions and ideas repeated throughout countless FPS games over countless years, and completely subverts them.

Check it out here (a copy of Doom 3 patched to version 1.3 is required), or hit the jump for more of my (intensely spoiler-filled) ramblings on it.

Killing zombies is satisfying. This is a universal fact not only for game design, but for life in general.

This is what makes Conscientious Objector so brilliantly frustrating at times. You only get one gun in the entire game, cleverly dubbed the “pacifier.” It knocks zombies down for about a second and a half, but cannot ever kill them. This means that every single enemy you meet in the mod — every single one — is stronger than you will ever be. The most you can do is try to lure the bad guys away from where you need to go, and pop a shell or two into any stragglers. There is no cathartic moment of triumph beyond making it to the exit of each level, and even that sense of victory is immediately short-lived. I once ran into a decompression chamber while thanking my lucky stars that I’d evaded about a half-dozen members of the undead, only for the next level to dump me in an area entirely without oxygen.

This is where the player’s only human communication comes in. Rather than the gruff-but-supportive marine commandant who communicated with the player in Doom 3, the Conscientious Objector protagonist has nothing but a foulmouthed, downright dickish Brit to keep him company throughout the game — a dick who, much to his delight, informs the player that he just “forgot” to mention that the area he is entering is completely devoid of oxygen, requiring the player to sprint around the map searching for disposable O2 containers.

He will never champion your few successes, and will take literally every available opportunity to insult who you ostensibly are (a prisoner who, having refused to fight, is now being used to collect intel on the demon-infested Mars UAC colony since marines are too expensive) and everything you are doing. Take a little bit of damage? Rather than cautioning you to be careful, he’ll call you a stupid shithead. Manage to successfully shoot a zombie with a pacifier? “I don’t know what was funnier,” he’ll say. “The look on his face when you shot him, or the look on your face when he got back up again.”

Typical FPS games like Halo or Half-Life make the player feel as if they are fighting for a greater cause. Horror FPS’s like FEAR or Doom 3 emphasize the player’s loneliness. Of all the games and mods I’ve played, only Conscientious Objector consistently and unapologetically makes the player feel belittled, powerless, and alone. Games like Portal have dabbled into occasionally mocking the player, but such insults are usually counterbalanced by some sort of violent vengeance near the game’s end. Objector includes no such catharsis.

From beginning to end, the player is shat on by both the mechanics and the story. As unpleasant as that may sound, it’s so unlike anything I’ve ever experienced in a game — so completely and intentionally opposite of the regular emotions we’ve been conditioned to feel in an FPS — that it feels downright refreshing in its nihilism. Your character refused to fight in a corporate-sponsored war, refused to willfully immerse him or herself in a world of gory deaths and shell casings, and your punishment is to experience the ultimate form of powerlessness.

Conscientious Objector‘s political stance isn’t terribly subtle and the game ends up being accidentally fun more than a few times (while it’s unsatisfying to be unable to kill the zombies, it’s often pretty satisfying and empowering to trick a half-dozen of them into following you down one corridor, before juking them and running right past them without taking damage), but it’s still an intellectually stimulating, emotionally devastating inversion of the modern FPS. It may also be the most nihilistic game I’ve ever played, which counts for something.

Get it here. I Goozex‘d Doom 3 just to play it, and I consider my 100 points well-spent.