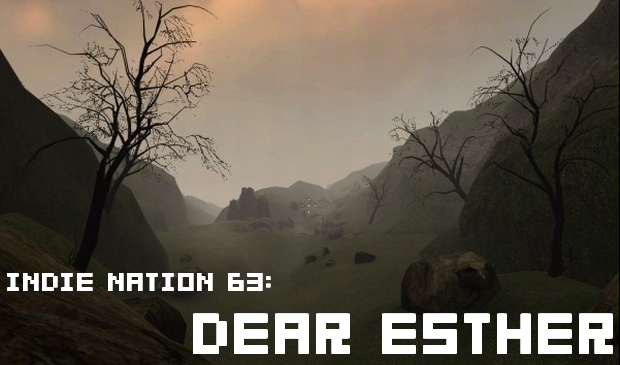 I have to admit — I heard about Dear Esther from RockPaperShotgun, and their writeup is probably superior to whatever it is I’m about to blather on about regarding this moody Half-Life 2 mod.

Dear Esther is an incredibly slow-paced mod with no combat whatsoever and an emphasis on atmosphere over scripted narrative. It’s subtle,unapologetic, and gets subtly goddamn unnerving near the end. If you’ve got the time — and more importantly, the patience to deal with your character’s agonizingly slow walking speed — there’s really not much else like it.

Check it out here, or hit the jump for more of my commentary on it.

Dear Esther feels to me like a cross between BioShock and Silent Hill, with everything but the atmosphere and the narrative removed. With literally nothing to do but search this island for clues, hearing the progressively madder rantings of a person who may or may not be your character, the game practically suffocates you with its atmosphere. Of course, the story is so damned vague that by the end you may only have an inkling regarding what’s going on (I still don’t know how the road to Damascus metaphor fits into anything), but you’ll hopefully have just enough of an idea to be disturbed, and saddened.

What little plot there is gets delivered primarily through a sort of voice-over narration by someone who is writing letters to a woman named Esther. The environment itself puts forth a couple of clues, but  they unfortunately tend to rely on the narration to explain them. You’ll see a diagram of a molecule or something, and rather than finding out why it’s there or what it means through further exploration, you’ll eventually trigger an audio letter that more or less explicitly tells you what it’s there for.

As subtly unnerved as I was by several of the audio diaries late in the game, I would have loved to have gotten just as much information from the world itself, as was the case with something like BioShock or Portal. As it stands, the game world just sort of serves to confuse the shit out of you, until the voice-over narration comes along and make things (somewhat) clear with a wave of its hand.

Still, there’s something to be said for confusion. Being on this paradoxical island full of wrecked ships and scientific cave etchings is a wholly bewildering affair that, when combined with the (often too-loud) music and the narration, often made me feel like I was standing in the middle of a much more believable, and thankfully less monster-filled, version of Silent Hill.

The quiet, existential dread slowly creeps up on you as you slowly begin to piece together just what this island is, and what it means. There’s no “a-ha” moment where everything just sort of clicks into place and everything is answered — there’s only the slow realization of where you are, and what it all might mean. The moments of realization in Dear Esther are not awe-inspiring or even necessarily gasp-inducing, but they get under your skin. The game’s final moments may make your stomach sink just a little, or make your heart skip half a beat.

Also: when the game starts up, don’t go along the beach — the level is unfortunately designed in such a way that the beach looks like the right direction to go, but you’re actually supposed to jump onto a grassy area and follow a barb-wire fence to the other side of the island. It’s relatively easy to find your way around after that.