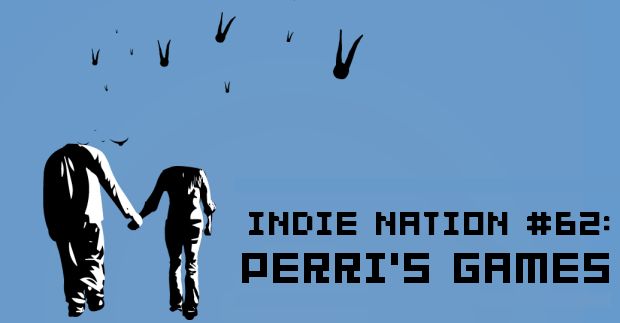 You may know Anthony Perri from his position as Resident Person Named Anthony Who Isn’t Anthony Burch in the Destructoid community.* But did you also know that he makes artgames, as well? Surprisingly good, minimalist artgames?

Well, he does. In this zip file, you can find three such games he’s made: Jump, Hold, and How Does My Garden Grow. All the games were technically made for an art museum environment, but Jump and Hold are still pretty damn effective even when played by one’s lonesome. Extract the SWF files to wherever you want, then drag the icon into a Firefox tab you’re not using in order to play them.

Be warned, though: Perri’s games are pure. They consist of the absolute minimum amount of interaction required in order to produce an emotional or intellectual effect. Don’t go into these artgames assuming they’re going to be filled with the mechanical depth of Braid — they are as simplistic as they possibly can be, to great effect in my opinion. Hold uses only the mouse, Jump and HDMGG use WASD,

Download the games and try them out, or hit the jump as I discuss each game individually.

Jump will piss you off, and that is the point.

How long did it take you to realize that the jump is impossible? How frustrated were you when you realized it? While Jump seems like an almost criminally obvious and easy game to make, I find it to be a remarkably clever distillation of the emotion of frustration.

Try, in your head, to design a game that forces the player to feel intense frustration, and only frustration. Personally, I can’t conceive of a more effective game than Jump. Mega Man is frustrating, but it balances that frustration out with a sense of triumph and reward. Jump is frustrating because it gives you a clear goal and an inability to attain it, all while promising you that it is, in fact, attainable.

It makes you truly believe that the jump can be made, only allowing the visual passage of time to hint to the player that you will be stuck in this little corner of the map, forever. The heart bridge practically begs to be crossed, yet it might as well be miles away. The jump you need to make to reach it is just barely out of reach — so close that you’ll probably try again and again to trasncend the gap, maybe even after you’ve already realized that it’s probably impossible to make.

Everything in the game makes the player feel that crossing that gap is a legitimate possibility, but every attempt to do so will end in soul-crushing frustration. I have never before played a game that so effectively encapsulates one single emotion, and one single emotion only.

Hold will bore you, and that is the point.

I’ll just copy and paste my personal response to Perri after I played Hold, because I feel the same way about the game today as I did a month ago:

“I actually quite like it. If I remember correctly you were saying I might not because it’s Tale of Tales-ish, right? I think this game succeeds where their stuff generally does not. Like, if The Graveyard didn’t have the shitty music video and was just you walking around and sitting and maybe dying, it’d be much better, and more like this. I think people might misinterpret their boredom or irritatedness at having to continually hold down the mouse button as a fault with the game, but fuck em. I was like halfway or 3/4 of the way through the animation and thinking “Jesus christ, can this thing just fucking finish already, I’ve got other shit I wanna do and now my finger is beginning to hurt,” and then I realized — maybe that’s kind of what a longterm relationship feels like. Actually holding on becomes kind of painful and boring in its own way.

You’ve made the actual gameplay mechanic — even the actual PHYSICAL method of interacting with the game — meaningful, in a subtle way. Outside of Noitu Love 2, I’ve never seen anyone accomplish anything on that level with a mouse, and never toward as (for lack of a better word) artistic a goal as this one.

That said, I do think you may run the risk of mixing metaphors at several times throughout. There’s one part where plants seem to grow out of hte head stumps and then hearts appear out of them, and it felt a little redundant and/or contradictory to me; I’m already mentally in this mode of assuming that everything I see is a metaphor for love and the way the world seems when you’re trying to maintain a relationship, and then all of a sudden the game shows me the universal cartoon symbol for “love” and I feel sort of confused and/or betrayed.

The symbols, to me at least, worked best the more vague they were. It’s a little bit too vague while simultaneously being a little bit too specific, while also drawing too much attention to itself, so where everything else is sort of open to this on-the-fly interpretation (like the really, really neat Tetris sequence) some stuff stands out among the crowd, shouting really loudly.”

But yeah, I definitely liked it. Probably just as much as your previous game.

How Does My Garden Grow is the only game in the trilogy that really doesn’t work in a private environment. In Perri’s words (told to me through chat):

This is created to be, not necessarily social, but communal

it is projected in a gallery, everybody can see the growth of this plant at all times

the player can do 3 things, but they will eventually move on and another will fill in and make their move these actions all effect the growth of the plant, I was interested in if this community could keep the plant alive or if somebody would eventually sabotage it or get so sick of it that they gas it

So, yeah. That one doesn’t really work if you’re alone, but it’s there. I wrung some meaning out of it just by getting so angry at my own plant after five minutes of trying to grow the fucking thing that I burned it to the ground, but your mileage will vary.