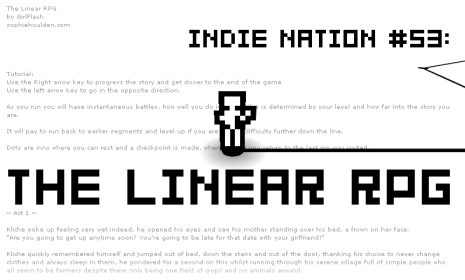 Playing Lost Odyssey to completion taught me one very important thing about myself: I hate RPGs. Not the fun sort of hate that evokes a misanthropic glee — the kind of hate one usually reserves for Fox News and Uwe Boll — but a depressing, unspectacular, bummer hate that I found difficult to put into words.

That is, until I played The Linear RPG.

A clever game-as-game-criticism in the same vein as Achievement Unlocked, The Linear RPG reduces the JRPG structure to its most basic, minimal parts, and reveals the underlying inanity of it all. With all the cosmetics (pretty graphics, a big world, a fighting system) stripped, The Linear RPG comes to an inescapable conclusion: linear JRPGs, by their very nature, have almost nothing intrinsically interesting to offer the player.

You can try to take the game as a winking nudge in the ribcage to JRPGs as a whole, but The Linear RPG puts into gameplay what I so often could not find the words for — and for that, I am grateful and jealous.

To see me attempt to put those thoughts into words anyway, hit the jump.

People like “good” JRPGs — the Dragon Quests and Final Fantasys of the world — because of the combat and the story. The Linear RPG points out the essential weirdness of this perspective: we have to suffer through combat solely to get more of the story, except the stories usually aren’t worth the trouble and the combat requires almost no strategic choices.

That The Linear RPG‘s levelling system boils down to nothing more than walking left and right, gaining XP while losing HP, might initially seem an unfair simplification of RPG combat practices — but is it, really? When was the last time you had to make a legitimately thought-provoking choice in RPG combat? When was the last time you found some really, truly worthwhile combat strategies that you weren’t either blatantly obvious or easily mastered and then repeated for sixty-five more hours?  More often than not, RPG combat just boils down to wasting player time while rewarding him with a constant sense of accomplishment in the form of levelling. The Linear RPG represents this almost perfectly.

Story-wise, JRPGs are almost never well-written, even when the JRPG fanbase seems to agree they are. Lost Odyssey was praised for its Thousand Years of Dreams short stories, but I seldom heard anyone complain that given these text-only tales full of philosophy and melancholy and intelligence, Lost Odyssey the actual game was just another JRPG about Stoic Heroes Saving the World From Destruction At The Hands of a Ruthless Dictator Who Wields Immense Magical Power.

The story that scrolls through the background of The Linear RPG, while nowhere near as subtle as the mechanics that reinforce it (a Chuck Norris reference is made before the halfway point), tries to get at this. You’re running around, levelling and healing yourself solely so you can get to the next waypoint, solely so you can see more of the story, but why? The story itself is awful JRPG rubbish, and is almost never interesting in its own right, yet you’re suffering through carrot-on-a-stick grinding gameplay just to see more of it. Why? Why in God’s name are games with this essential structure tolerated to the degree that they are? Well, the game sort of answers that, in a way — regardless of how simple and silly the levelling system is it is also kind of fun, even if you’re philosophically opposed to it. As was the case with Achievement Unlocked, I got the basic idea as to what the game was telling me, but I kept playing in spite of myself. C

There are no interesting choices to make in The Linear RPG, nor is there a particularly effective narrative (though admittedly, “Today your destiny becomes fate” is a pretty good line), and even if you find yourself satisfied enough by the levelling system to play it through to the end, you’ve still basically just wasted your time. This is exactly how I felt upon completing Lost Odyssey, and that’s why The Linear RPG is so goddamned good.

Whether you love RPGs and disagree with everything I just said, or you hate them and want to feel like you’re not alone in the universe, you’d probably do well to check out The Linear RPG.