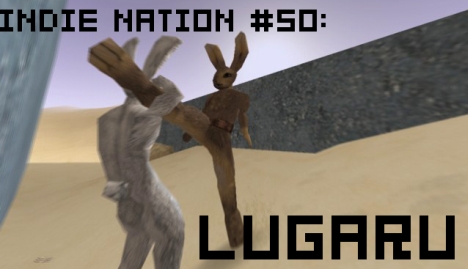 As far as I know, there are only two artistic works in existence that prove bunnies can be badass: Watership Down, and Lugaru.

Lugaru‘s been around for quite a while — four years, to be exact — so if you’ve never heard of it, now’s the time to check it out. It’s a remarkably intense and intuitive third person brawler, made even more remarkable when you realize David Rosen made it when he was still in high school.

Remember back in your sophomore year when you were going to parties, getting drunk, trying to trick a girl into falling in love with you and still coming to grips with who you are while having anxiety attacks over your grades and college scholarships? While you were stressing out about all that crap, David Rosen was making a goddamn bunny brawler. And a really damn good one, at that.

Comparatively, your life has meant nothing.

If you need absolute proof that the four years of public education you spent during the most sexually and intellectually interesting part of your entire life were an almost complete waste, then I’d suggest you: (A) download the demo (Win, Mac, and Linux are all supported), (B) ignore the ugly-for-a-reason graphics, and (C) grab something sharp. Or, alternately, you can hit the jump as I explain what makes Lugaru so special.

When you play the demo for Lugaru, you’re probably going to notice the not-so-great stuff first. The graphics, for instance. I’m not going to try to play the whole “graphics don’t matter blah blah bork” card here, but it’s worth pointing out that since the game is playable on pretty much every OS known to man, it’s important that it’s not much of a resource hog. I can play Lugaru just as well on my PC as I can on my Mac, and that’s saying something.

Also, it was made by a high schooler.

Additionally, the game is really goddamn hard, sometimes ludicrously so. Since you only have three attack buttons, most of the combat comes down to timing and luck — often with more of an emphasis on the latter, which is sort of a bummer.

But, hey, it was made by a high schooler.

Despite being made four years ago, the game exhibits a lot of currently-chic design choices like the almost total lack of a HUD, regenerating health, and other stuff. Don’t get me wrong — you’d never mistake this for anything but an indie game, but it’s damned remarkable considering it was almost completely made by one dude, who was in motherfucking high school at the time.

You can download the demo here, and buy the game from that same location if you want. The asking price of $20 seems pretty unreasonable given the game’s age and difficulty, but if it’s any consolation the sequel, Overgrowth, will be out sometime this year. You can buy that instead, or just spend a lot of time dicking around in the Lugaru demo.