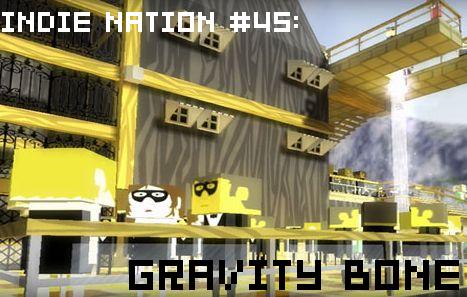 Sorry for the late Indie Nation. I’d make an excuse, but it wouldn’t be a great one.

Though people frequently use the phrase “style over substance” as an insult, I’ve never been more happy to label a videogame as possessing this quality than Gravity Bone.

While playing Gravity Bone, you will not understand:

-Why everyone is shaped like some sort of papercraft character

-Why you’re enjoying it so goddamn much

Gravity Bone is so stylistically unified, so consistently cool and weird and imaginative, that it’s damn near impossible not to fall in love with — even as the game ends and you’re wondering what the hell happened, and why.

I’d be spoiling it if I said anything more, so go here and get it. Be warned, though: it’s as short as it is awesome.

As always, you can hit the jump to find out more about why I love the game so much.

The fact that literally every single tutorial step is integrated with the actual game environment (a warning near an employee sink reads, “Safety First: Press Space to Jump”).

The blocky papercraft-esque characters, which, unlike so many attempts at “realistic” humans in first-person games, look exactly as they are intended to look.

The bloom effects, which are nigh unbelievable considering the game runs on a modified version of the motherfucking Quake 2 engine.

The Xavier Cugat big band music, and how adequately it sets up the game’s tone.

The lack of cut scenes, and the surfeit of cool setpieces (running on the table in the dining room would have been one of my favorite indie game moments of 2008, were it not currently 2009).

All of these little cosmetic things combine to form a vision which is so perplexing, yet so utterly enthralling that I couldn’t help but lose myself to it completely. Despite having absolutely no idea who Citizen Abel is, or why I’m doing the things I’m doing, or even exactly what happens at the game’s end, I trusted the game’s stylistic touches enough that my confusion never felt like a problem so much as a whimsical part of the ride.

Really, that’s what Gravity Bone feels like: a great ride. Even though the actual things you’ll be doing occur on an incredibly linear timeline and aren’t spectacularly interesting in and of themselves (your actions throughout the entirety of the first level can be efficiently summarized as, “walk through a door, get an item, give that item to another person, leave”), the atmosphere and style alone will barrel you through to the journey’s end, which comes all too soon.

Following Braid, Portal, World of Goo, and Left 4 Dead, I’m tempted to not want the game to be longer. I’m trying to convince myself that even though the game only lasts about fifteen minutes, it’s a great fifteen minutes, and I should be happy with that in the same way I was happy with those four aforementioned games’ running times.

Gravity Bone is simply too cool, too imaginative, and too refreshingly different as a first-person experience, to be as short as it is. I downright need to see the cosmetic and design choices on display in Gravity Bone scaled upward into a larger game. I would pay money to spend a few hours as Citizen Abel, doing ridiculous things I will never understand, while enjoying every moment of it.

As it stands, though, I’ll just have to be content with replaying Gravity Bone over and over, drinking in the visuals, trying to figure out why the hell one of my character’s memories is ripped directly from The Godfather.