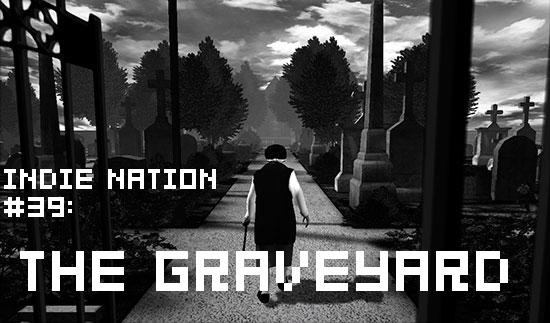 Throughout the course of the Indie Nation series, I’ve highlighted action games, text adventures, art games, platformers, and everything else I could get my pretentious, elitist hands on. However varied and unusual those games may have been, however, they shared at least one thing in common: I thought they were good.

The Graveyard, developed by Tale of Tales, infuriates me. I think it’s a pretentious, ineffective waste of the interactive medium, and I hate it.

Whether I like it or not, that makes it extremely important.

Any intelligent discussion of games as an art form, or the potential of games as an artistic medium, must include some reference to at least one of Tale of Tales’ games, just to examine what the hell they’re trying to do (and to my mind, why they shouldn’t be doing it).

Download it, play it (it’s very short), and, if you like, hit the jump to find out why I detest it despite (or because of) its importance.

The Graveyard infuriates me because it isn’t a game. The creators think it’s a game, of course. They think that by making a game which includes no choices, rules, or goal they are expanding the medium and redefining our understanding of what a game can be, but they’re really just spinning wheels. Games, by definition, include rules and goals. To make a game with neither is not expanding the definition of what a game is, but simply making quasi-interactive cinema.

Have you played it yet? Did you download it and try it out before reading this? If you haven’t, it will probably seem like I’m exaggerating the game’s content or just trying to be a jerk, but really — The Graveyard is, as a game, completely pointless.

The player’s input means almost nothing. The interactivity itself is completely irrelevant to the plot of the game, and what it is trying to say: rather than my actions driving forward the narrative, or exploring the theme, all information is delivered to the player via a noninteractive cut scene wherein a song plays, essentially delivering the theme (“This game is about the odd nature of death”) through subtitled foreign lyrics. The Graveyard might be a fine short film or music video, but there is literally nothing about the game that necessitates interactivity, and to try and call it a “game” is to insult the work of people like Rod Humble, Jason Rohrer, and others who are actually attempting to convey meaning through rules and interactivity.

Whether or not you like Rod Humble’s The Marriage, you have to admit that its goal was completely admirable: using only gameplay in the most minimalist way possible, the game attempted to convey the dynamics of a marriage. We can tear The Marriage apart in a dozen different ways, but Humble’s goal is the exact sort of thing that steers the medium forward. By refusing to rely on the mechanics of other art forms (text, cut scenes, narrative), Humble tried to explore what games were uniquely capable of.

The folks at Tale of Tales, however, begged to differ, saying:

Though these statements are somewhat absurd in and of themselves (anyone who claims The Marriage doesn’t leave room for interpretation doesn’t know what they’re talking about), they inform the design philosophies behind The Graveyard and, subsequently, what’s so wrong about it.

I felt like writing about The Graveyard after reading their postmortem a few days ago. One specific passage caught my eye. While explaining why they chose to remove activities for the protagonist like bird-feeding, smiling, singing, and so on, their rationale was, “the gameplay distracts from the story.”

This is one of the most ignorant things I have ever heard relating to game design.  The Graveyard gives the player control, but very begrudgingly: you can only move on a single set path, your actions have no effect on the environment, and you’re even told exactly what to do and when to do it in the pause menu. Tale of Tales thinks a “specific” story needs to be handled in specific terms, and nothing’s more specific than refusing to give the player any choices or control. Rather than trying to explore what game rules can mean, and how the player’s choices and exploration of those rules can be conducive to meaning and discovery, The Graveyard is nothing more than a short film that the viewer has to hit a few more keys than usual to watch. I don’t particularly have anything against making this sort of pseudo-interactive art, but the developer’s constant claims that their works are games, and the incredibly self-congratulatory tone of the postmortem, make The Graveyard all the more offensive.

While Jon Blow and Ian Bogost are trying to see what games can do on their own merits, Tale of Tales intentionally abdicates whatever potential interactivity may have, opts to copy other art forms instead, and then congratulates ithemselves for misusing the medium. Hell, even being a narrative-driven experience The Graveyard doesn’t even utilize the game-specific methods of delivering story (environmental exploration a la BioShock, consistent viewpoint a la Half-Life): the entire game is literally one big cut scene with barely interactive portions at the beginning and end.

As a game, everything about The Graveyard is bad. As an attempt at expanding the medium as an art form, it’s downright disgusting. But for a medium in its artistic infancy, these are the growing pains: artists will try to reach out in every direction, searching for the limits of the medium, exploring what is and isn’t possible with their artform’s specific mechanics. I’m sure that in fifty years, The Graveyard will be looked at as an abortive jump in the wrong direction.