I highlight this week’s Indie Nation game with a slight hint of sadness: as much as I enjoy this game, I am more or less incapable of playing it any more, now that I am back home.

You see, Cowboyana is a mandatory two-player game: on the same keyboard, each player controls a gunslinger throughout about twenty different vignettes. Will you cooperate, or destroy each other? Will you pour the other a drink, or shoot him dead as he holds the bottle?

If you’ve got a friend you can play with, go ahead and download the game and don’t bother with the rest of this article until you’re done. If you’re all by your lonesome, hit the jump to see what you’re missing.

Most of my proper time with Cowboyana took place during E3: I shared a hotel room with Jon Holmes and his camera crew (consisting of his friend Andy), and as they had to wait for their interview footage to capture and I hadn’t received an invite to the Rock Band party that night, we passed the time by playing Cowboyana, which I had been eager but unable to try out since its release.

Cowboyana is a game without an ending, a sequence of randomly-selected mini levels based around one or more of the three tenets of cowboyism: drinking, shooting, and riding.

It is also, albeit subtly and maybe unintentionally (though I doubt it), an arthouse game.

You see, the game requires two players, but it doesn’t fall into any established 2P game structure: it’s not just a deathmatch game, not just a cooperative game. It can be both or either, depending on how the players interact with the vignettes.

The game opens, and frequently returns to, a scene in a saloon where the two cowboys sit side-by-side at the bar. A drinking minigame begins, which looks like this: 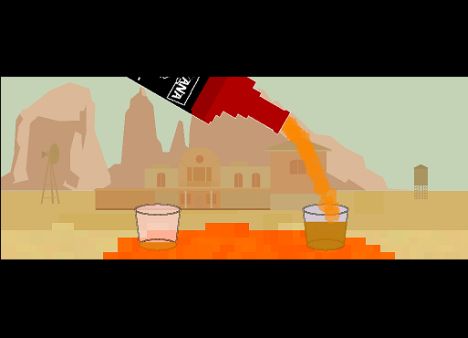 Both players have control of the bottle. One player controls the bottle’s angle, while the other controls the movement. The players can either cooperate and pour each cowboy a glass, or fight over giving themselves more whiskey, or simply pull out a gun at any time, ending the whiskey minigame and turning the level into a straight gun duel between the two players. Also, for seemingly no reason, the controls reverse every few seconds: you’ll think that A tilts the bottle left and D tilts it right, but suddenly the controls will switch and you’ll have to keep up.

Whichever attitude the players take toward the whiskey game influences what the next level will be. I don’t know if it’s 100% guaranteed, but, generally, it seems that if you both pour equal glasses of whiskey for one another, you both play a cooperative level next (either a shootout on a train, or a horse ride across the desert where one of you controls the horse). If one gets more whiskey than the other, or if one of you shoots the other, then there’s a greater chance of the next vignette being a solo level, where one player fights off a large group of AI-controlled desperadoes.

We could spend time talking about how this mechanic speaks volumes talking about the nature of friendship, betrayal, and the cowboy mythos, but the random cowboy poetry preceding each scene attempts to do anyway. Suffice it to say that there is some meaning there, even if you’re too busy shooting baddies and buffalo to notice.

Also — and I just had to devote a paragraph to this — the reload feels AWESOME. Your gun is a revolver with eight chambers, and in order to reload it you have to hold down the reload key, and then press the movement keys (either WASD or the arrows, depending) in all eight directions. When you get really good at the reload, you can hit the reload key, then quickly twirl your fingers all around the movement keys making a 360 degree arc, hitting every chamber and making some very satisfying “clickclickclick” reload noises as your desperado twirls the gun in his hand. 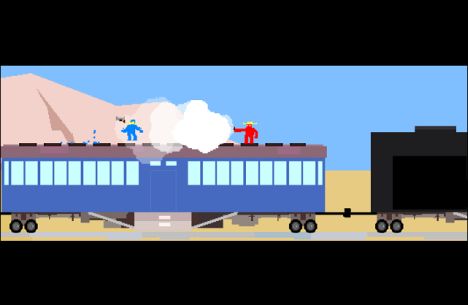 Even ignoring the artistic merit of Cowboyana‘s structure, however, the random nature of the game imbues a lot of fun and replayability into what might have otherwise gotten really, really old after both players have seen the majority of the scenes.

As Andy and Jon played, they slowly worked out the behind-the-scenes mechanics of which drinking outcome resulted in which succeeding level. As the shooting levels were pretty damn difficult (not to mention friendly fire is always on), Andy and Jon found themselves dying…yet their deaths weren’t punishments. The vignette simply ended, and the players were ushered onward into a new scene. Death was still kind of a bummer, as the players wanted to make it to the end of each scene alive, but it didn’t cause any frustration. At least, not enough to make Jon and Andy stop playing within a half hour of first touching the controls.

To summarize, Cowboyana is a very random, very clever, very fun, and very unusual arthouse game. I’ve honestly never seen anything like it. If you’ve got a friend to play with, spend a few minutes dicking around trying check out all the scenes, or see if both of you can make it to the end of a train sequence without dying. Hell, if you’re lucky, Cowboyana might even teach you a little bit about whoever you’re playing with.