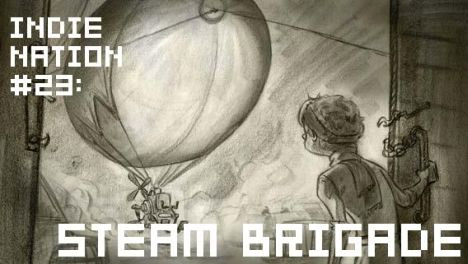 Given last week’s highlighted Indie Nation title (Gun Mute, an awesome text adventure shooter), I thought it’d be fun to highlight yet another game that melds two gameplay genres you might not expect to work together. Steam Brigade, while maybe not as remarkable to contemporary gamers what with titles like Patapon and Grim Grimoire on the market, was probably one of the first 2D RTS games of this decade.

Set in a sort of steampunk version of WWII (which is much less violent than it sounds), Steam Brigade streamlines RTS gameplay into a simple matter of timing, forethought, and reflexes. Since your units can only move across a single dimensional plane, you don’t have to worry about flanking or 3D terrain or anything like that; you’re just meant to pay attention to troop deployment and timing.

If you suck at RTS games, as I do, Steam Brigade manages to reduce all the awesome things about the genre into one intuitive package, without getting into the sort of minutiae most mainstream RTS games are so fond of (there’s no resource mining, for instance). You can check out the demo here, or buy it here for a (quite reasonable) $9.95.

Or, you can hit the jump for my impressions.

I am goddamn abysmal at RTS games. Like, I know everyone makes the joke that they’re bad at a genre when they’re really just decent or okay (“Aw, no, man, I’m not all that good at Smash — oh, okay, I guess I’ll play if you want me to FINALDESTINATIONNOITEMS”), but I legitimately suck balls at them.

I don’t know why I continue to come back to the genre, honestly. Is it the oh-so-rewarding FMVs of the Command and Conquer series that make me so open to building units and blowing up structures? Is it the satisfaction I get from overwhelming an opponent not through any semblance of strategy or intelligence, but by sheer numbers? My ability to trick myself into thinking I have even the slightest semblance of strategic knowhow, when in reality I’ve never beaten a single human being at chess?

Honestly, I don’t know. I do know, however, that Steam Brigade manages to tickle all the right RTS-oriented parts of my brain (apart from the FMV thing, anyway).

Whereas there’s a pretty significant learning curve with a Starcraft or an Age of Empires, in Steam Brigade, player comprehension sets in almost immediately. You are the awesome-looking airship with a magnet dangling from your chair. You want to get an engineer in the enemy base. Certain troops work against certain other troops, and capturing bunkers along the way can turn the tide of battle. After fifteen minutes of playing, you don’t actually have a complete grasp of the mechanics, but it’s difficult not to feel as if you do. Everything is laid out so well that the game rules simply click into place much more quickly than I would have expected from a genre that causes me so much strife.

This isn’t to suggest that the mechanics are simplistic, however. As the game progresses, the player is forced to learn all manner of different skills, from troop stacking, to using sticky bombs, to air combat. Each new strategy is presented to the player in its own self-contained level, essentially mixing tutorial with actual gameplay. These mechanics keep building on top of each other throughout the entire campaign.

In all honesty, I’m kind of surprised Steam Brigade hasn’t been picked up for XBLA or PSN. Its mechanics aren’t necessarily PC-specific (the mouse control could easily be replaced with that of a joystick), the physics are fun, and it’s just intuitive-yet-deep enough to sit perfectly next to something like Eets or Wik and the Fable of Souls.

As it stands now, the game is still damned cheap, damned fun, and, given its multiple difficulty levels, challenging enough for anyone even remotely interested in the RTS genre.