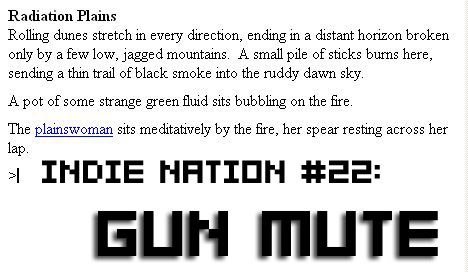 There is no reason a text adventure shooting game should exist, in today’s world. There’s even less reason that the game, by Pacian, should be so oddly transfixing, so inexplicably exciting, so absurdly fun as Gun Mute is.

I don’t actually enjoy text adventures in the least, which made Gun Mute such a ridiculously pleasant (and ridiculously ridiculous) surprise. Just play it. You can always type “hint” if you ever need help.

Alternately, you can hit the jump as I spooge over it.

Generally, text adventures are not known particularly for their action. They are, after all, called “text adventures,” borrowing the descriptor from the adventure game genre. The closest one usually gets to an action scene in a text adventure is usually preceded by the line, “you are likely to be eaten by a Grue.”

Gun Mute, however, is different. The game includes no inventory items, only two movement directions (“forward” and “backward”), and pretty clear-cut objectives: kill anyone and everyone standing between you and the person you’re trying to save.

Each self-contained battle is really a puzzle, presented as a text-driven action scene. Each fight requires a mixture of forethought, examination, and timing from the player in order to make it through. As said earlier, there’s literally no reason typing “reload” into a parser and then “shoot sue” should be anywhere near as fun as it is, but goddamn if it isn’t one of the most enjoyable text adventure experiences I’ve ever had.

I do say that, however, as someone who doesn’t actually enjoy text adventures all that much. I stopped playing Zork after a while, and I’ve started The Hitchhiker’s Guide to the Galaxy more times than I’d care to mention, but I don’t actually derive a lot of satisfaction from bumbling about like a jackass, trying to remember invisible maps while having to “LOOK AT” everything in the room just to progress.

In a sense, Gun Mute cuts through all that crap and becomes a text adventure for people who don’t usually play text adventures. This means, of course, that if you do really love text adventures, you may find Gun Mute simplistic and dull.

Gun Mute is pleasingly short, very friendly and intuitive (again, just type “HINT” for help if you ever need any and a UHS-esque menu will appear), free, and completely original. It’s a game I’d say everyone needs to play, if only to find out that a text adventure FPS can be done.

Download instructions can be found here. It’s playable for both PC and Mac.