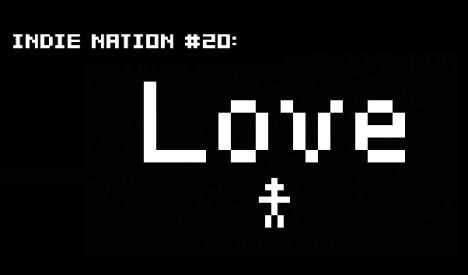 After the psychological mindf*ck metagame that was Execution, this week’s Indie Nation goes back to basics. There are no anti-war messages, questions of murder and consequence, or really any theme at all in Love.

Dtoider Blake turned me onto this charming (yet blisteringly difficult) platformer, which was just released a week or so ago. As a game, it has no pretentions whatsoever: it’s just a solid, incredibly challenging platformer that just happens to allow the player to set their own respawn checkpoints. Love includes nothing that’s going to change the world, and that’s what makes it fun: it’s just straight platforming at its most inspired and difficult.

You can grab the five-level demo here, buy the full game (for only one dollar!) at the official site, and check out my impressions after the jump.

On the one hand, I absolutely adore (I don’t wanna say “love,” because that’ll give birth to ridiculous sentences like “the thing I love most about Love” or “I love Love“) many things about this game.

The fact that the player can quickly and painlessly set their own spawn point, for example, is a very simple mechanic that makes a huge difference on the gameplay. When you can define when and where you spawn with the touch of a single button, the game stops becoming about surviving or making it through the levels intact so much as it’s about experimentation and getting multiple tries at hellishly difficult jumps without having to retread half the level just to get back to where you were when you died.

I also like the minimalistic graphics, the cool soundtrack, and the difficult-as-hell level design changes up the player’s tasks every time they enter a new room. First, you’ll just be running and jumping; then, you’ll be using bouncy pads to navigate over a bottomless abyss; then you’ll fall into a slow-time tunnel and have to avoid spikes sticking out of the walls. Each of the levels feels different, while still being pleasantly challenging.

If that’s the case, though, then why am I probably never going to finish Love? Why, despite how charming I find the game to be, am I physically incapable of actually completing it? Quite simply, it’s too goddamn hard.

Everytime you wanna teleport back to your spawn point, you lose a life. Everytime you touch anything, you lose a life. Anytime you experiment with wacky jumps and leaps of faith, as the game suggests you do, you’ll probably lose at least five lives. It may sound weird to call a game that literally starts you off with 100 extra chances “unforgiving,” but that’s the way it is — the manual respawn and hilariously difficult levels seem to suggest experimentation and learning without having to replay through stuff you’ve already, but the players’ limited lives basically undo those otherwise brilliant design choices. When the player’s lives are all used up, he’s smacked back to the title screen and has to start the entire game from scratch. Why?

I had so much damn fun defining my own respawn points and being able to play around in these imaginative levels without the consequence of replaying stuff I’d already seen before. Why suddenly go back on that design choice just because I lost a few more times than I should have? The levels aren’t that difficult once you initially figure out how to get past them, so having to replay through the first dozen levels or so just to get back to where you last were when your hundredth life dried up feels kind of irritating, and unnecessary. Since there’s also no ability to save, this means that you’ll have to play the whole game in one go in order to beat it.

And yet, I keep trying. Despite being continually punished by Love at every tur, I still wanna go back in and beat the game. I said Love didn’t have any practical themes behind it, but maybe I was wrong; maybe the fact that I keep coming back to the game for its few brilliant gameplay mechanics, despite how much it mocks and abuses me, really works as a metaphor for an abusive relationship.

Love‘s a real bitch, but hell if I don’t like having her around.