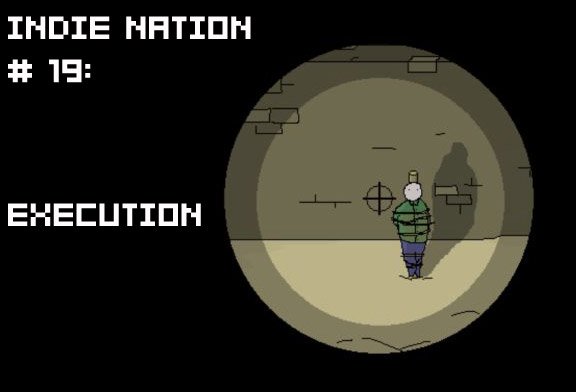 Sharpless turned me on to this week’s game, Execution. He gave me only two instructions, which I will pass onto you and demand you follow to the letter:

1. Do not read any of the comments or replies on the game’s official download page.

2. Play the game at least twice.

As always, I’ll talk about what makes the game interesting after the jump, but I must insist that you do not hit the jump until you’ve played through at least two times.

I mean it. Don’t click “read more” until you’ve already played and understood the game for yourself.

The idea presented in this game is hardly original, but it still represents the first time anything like it (in my memory) has actually been done somewhat successfully. Hideo Kojima talked about possibly making a game where death is truly permanent, but I’ve never seen anything of that sort actually implemented until Execution.

Granted, it’s a secondary character that dies permanently rather than the player (it’d be much harder to permanently kill your player and expect them not to resent you), but the idea is still original.

What did you do when you first loaded up the game? Did you shoot the victim immediately? Did you wait a while, testing the other keys, trying to find a way to do something else? Did you think about things for a while before offing him? Did you quit the game? Your personal answer may define a lot about your personality, especially where your experience with videogames is concerned. During our discussion about the game, Sharpless told me, “Just for the record, I lost. Fast. That’s what I get for playing too many shooters and not caring about dead people.”

I wouldn’t go so far as to say this game shows how you’d react in real life — games can’t represent that enormous a choice — but it definitely says something about your state of mind as a gamer, and what we’ve come to expect from modern videogames. If you’ve got a gun, we’re told, and there’s a person in front of you, you should probably shoot them. Every FPS in existence is based off this simple pact between designer and player: I’ll put bad guys in front of you, and you shoot them. Done. Thematically, Execution complicates this.

Something just occurred to me as I wrote the previous paragraph. You know, even after you’ve killed the victim, the game never tells you that he was a good person. Once the player finds out the victim is dead for good, the game doesn’t try to make you feel guilty by pointing out they were innocent or decent or American; it simply points out that this nameless, faceless person is truly, permanently dead. The simple fact that our actions have true consequence makes the player feel guilty. It could be Osama Bin Laden underneath that hood, for all we know, but the player still feels awkward and guilty because they truly killed him.

The thematic implications of the game are incredibly interesting not just in terms of personal morality, but also game design. No matter how many games pretend to offer the player “choice” or “consequence,” we as gamers know that our second chance, our extra try, is but a single quickload away. When playing Knights of the Old Republic, we have to suspend our disbelief and pretend that we’re making choices as if their consequences were permanent, despite the fact that many of us will probably make a permanent save file before any big plot branch just so we can go back later and see how things would have worked if we’d just chosen a different path. Execution, like life, does not afford such luxuries to the player. Yeah, it’s technically possible to find the registry change the game makes and delete it to bring the guy back to life, but that requires a level of skill most players don’t have. The majority of players will, I assume, try to re-download the game just to bring the guy back to life. Thankfully, this doesn’t work, and the player is left to consider the consequences of their actions.

Since I assume a significant number of you will instinctively shoot the victim and never see the “victory” screen, I’ll just describe it to you. Basically, if you press escape while the prisoner is still alive, then the sniper scope fades to a screen saying “YOU WIN” and the game exits. If you go back into the game, the victim will still be there, tied to the post.

But, yeah. A very interesting experimental game about a very specific idea. What do you think? What did you do?