If you’re one of those “people” who either owns a PS3 or is friends with someone who owns one, then this week’s Indie Nation may be totally useless to you. If, like me and so many others, your first chance to actually play Everyday Shooter arrived a week ago when the game finally appeared on Steam, then you might want to know how badass this game is.

As always, I’d normally suggest that you just go get the game and play it without any suggestion or background from me, but given that (A) it costs around $10 on Steam and there’s no demo, and (B) most of the things I’ll be talking about have been thrown around since the game first appeared on the PSN, I think there’ll be less harm than usual in your hitting the jump and reading about what makes this game so awesome.

In other words, just hit the jump and read about what makes this game so awesome.

A fair many games bloggers who have fallen in love with Everyday Shooter liken it to a music album. Personally, I know next to nothing about music (the first album I ever bought was “The Simpsons Sing the Blues”, and the last was an Ennio Morricone “best of”), so I can say only this: Everyday Shooter is a simple, addictive triumph of game design, and you’re missing out if you haven’t bought or spent a considerable amount of time with it. And it’s got good music, I guess.

Everyday Shooter controls like your typical arena shooter: you can move and fire in eight directions using WASD and the arrow keys. One hit from any enemy can kill you, and you move a lot slower while firing. 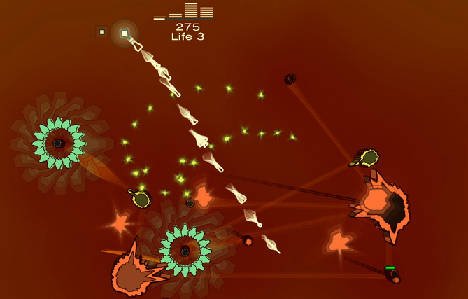 There are two goals in the game: to survive, and to collect little white point blocks. These points can be used to gain lives within the actual game, in addition to acting as a currency for purchasing unlockables in the main menu.

In terms of actual control, that’s it — but it’s more than enough. Even ignoring the level design, which I’ll get to in a minute, the design principles that serve as the backbone of Everyday Shooter are nothing short of brilliant.

Even though the game is on Steam, don’t expect to see any pointless, vapid Achievements — the game’s unlockables, both practical (buying more starting lives) and aesthetic (change the game’s color scheme), require you not just to play the game for hours on end, but to actually get good at it. If you don’t train yourself to become a decent player who can rack up combos and score a lot of points, then you can’t unlock extra lives to make your experience less punishing, or a level randomizer to break up the pace of the campaign mode. When you strive to unlock stuff in Everyday Shooter, it doesn’t feel like a compulsive, meaningless task: it feels like you’re training yourself to be better at the game, occasionally rewarding yourself with more lives or a different visual scheme along the way. Sort of like the XBLA version of Ikaruga, but better (Ikaruga rewarded the player with extra lives for the amount of time they invest into the game; Everyday Shooter rewards skill). 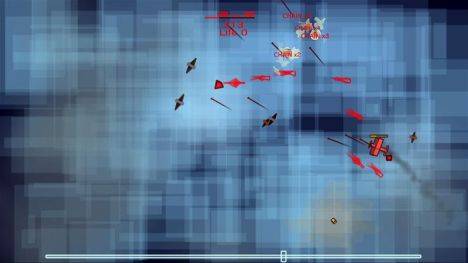 Hell, even something as seemingly straightforward as slowing the player down when they shoot turns out to make the experience a lot more satisfying. Rather than just zipping around the screen blasting everything in sight, Everyday Shooter forces the player to think about when and where they should shoot. Would it be smarter to stay still and blast all the baddies coming at you, or to stop firing altogether and make a mad dash to safety? Everyday Shooter may be the only arena shooter I’ve ever played where not shooting is almost always a viable option for survival.

This mechanic, however, would be worthless without some really clever, challenging levels to put it to the test — luckily, Everyday Shooter‘s level design is its greatest strength. Every single level feels completely dissimilar from every single other level, and I’m not just talking about the aesthetics: the chain system, enemy logic, and necessary survival skills the player needs to master change up in every single level.

The chaining system dominates all the levels, because it is not only the means by which you can quickly clear the screen of numerous enemies, but also how you can get huge point bonuses. In the first level, the chain might be activated by shooting a large green cube, which blows up everything around it, making tinier explosions which can then blow up other nearby projectiles and enemies, and so on and so forth. In the second level, you might have to destroy a flashing enemy who, when killed, will act as a sort of “smart bomb” and destroy all enemies of a certain type onscreen. 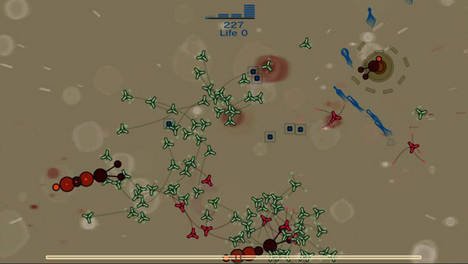 Similarly, the enemy logic will totally change from stage to stage. You’ll spend an entire level blowing up creatures with only a few shots, only to move onto the next level and find yourself facing several enemies which cannot possibly be destroyed by your fire, no matter how hard you try. You’ll become accustomed to mindless enemies drifting in from offscreen, until you switch levels and are destroyed by a very orchestrated attack by enemies who can not only heal their fellow baddies, but also create new ones out of thin air if left alone for long enough.

The changing rules of the chain systems and enemy logic are never explained to you after the first level, so the player must initially approach each stage with an investigative eye. You’ll be shooting and dodging, yes, but you’ll also be trying to figure out how this self-contained universe works. You’ll piece together little audiovisual clues, trying to pay attention to how the world reacts when you shoot, or don’t shoot certain things.

The experience of playing an Everyday Shooter level for the first time is not unlike playing through a really great arthouse game like Passage or Stars Over Half Moon Bay: you’ve got a very basic idea of what you’re doing, but once the actual rules and meaning of the level mentally click into place, the experience becomes infinitely more enjoyable and profound. The process of mastering these levels takes a lot of time — not just because you’re trying to improve your reflexes, but because you’re constantly re-learning the rules of the game with each new level. Every game does this, to an extent (if they don’t, then they’re almost immediately insulted as being “repetitive”), but Everyday Shooter calls attention to its own rule changes, and takes them to an extent far beyond what the average gamer is used to. 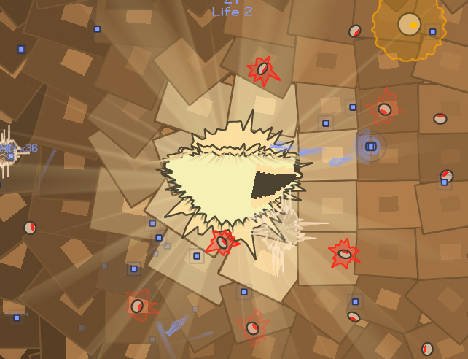 Every single level feels like an entirely new game. Mak could have just as easily given each level an infinite timer and released them separately, and nobody would have thought it odd. They’re that different, while still being united by the game’s essential movement, scoring and shooting mechanics.

I have to admit that I haven’t actually managed to beat the game’s final boss yet (evidently, no one on YouTube has either), but I’m still getting an awful lot of mileage out of this simple, inexpensive shooter. It’s fun, it’s challenging, and it’s incredibly clever. Go get it on Steam, or PSN, or whatever (I’d suggest the PC version, because Mak prefers playing it with a keyboard over a controller).