GUNLIMB has  controls that, while cute in theory, fall apart about 50% of the time when actually implemented. Its level design is “eh,” its backgrounds and enemy designs are ugly, and it doesn’t push its main gameplay concept hard enough.

None of this matters even remotely, because in GUNLIMB you play as a guy whose arms and legs have been replaced by machine guns.

It is, in fact, the most hilariously badass indie game ever made.

The entire game is one big, awesome, gory, high-concept joke that never ceases to amuse, even up to its final moments. You can, and should, download it here if only so you can finally say you’ve played a game where the main character is nothing more than a torso attached to four AK-47s.

Or, as always, you can hit the jump as I attempt to further convince you of the game’s merits.

There’s evidently some sort of story that’s being told through intentionally bad story slideshows, but it’s basically just the sort of over-the-top nuttery one would expect from a game called GUNLIMB; the hero gets captured by an octopus creature, has his arms and legs sawn off, and then attaches guns to each stump to aid him in his quest for revenge. Bada-bing, bada-boom. 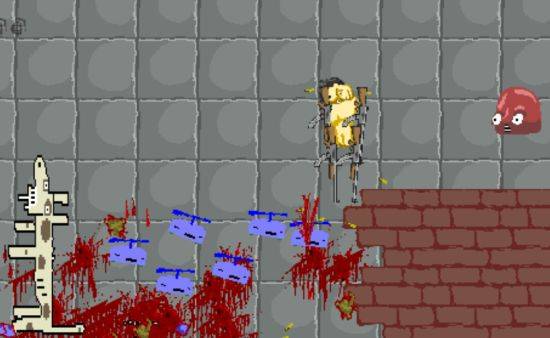 The main joke/mechanic GUNLIMB uses revolves around the fact that the main character’s movement and attacks are one and the same. The game is controlled using only the mouse; cursor aims, left click fires the machine guns, right click throws a (useless) grenade out of the hero’s mouth. There are no movement keys; in order to get the hero to move from place to place, you have to fire his machine gun limbs in the direction you want to propel yourself away from. If you wanna move to the right, fire to the left; if you wanna jump into the air (sort of — more on that later), fire at the ground. The machine guns basically act as your own little propulsion engine.

This makes for some interesting fights; often times, you’ll have to find a way to simultaneously dodge and deal damage, which means putting yourself in a very specific position relative to the enemy and firing without pausing, slowly propelling your body away from the baddie as you rapidly turn them into bloody gibs of meat with your appendage cannons. 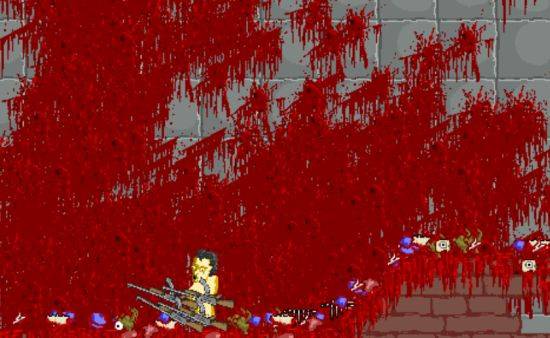 And oh, there will be gibs. While everything else in the game smacks of “intentionally ugly,” the gore system actually works pretty damn well; wherever you shoot someone, a blood spray will appear on the wall in that spot and stay there, permanently. As you continue to fire, chunks will fly off the baddies’ bodies and land on the ground, also staying there permanently. After fighting your way through a crowd of aerial enemies, you may be surprised to find the entire screen has been painted red and your character is nipple-deep in bad guy organs. The idea of a character with guns for limbs is pretty damn manly, and the over-the-top gore furthers this testosterone-driven agenda.

Functionally, however, the game isn’t the best. It works best as a joke rather than being a truly functional game experience. The game is funny, to be sure, but no matter how funny it is one can’t ignore the fact that the movement system is pretty janky. Ostensibly, aiming nearer to your own body while you shoot is supposed to make you go faster — in reality, this only works about half the time. Given the fact that roughly the entire game is based around this movement mechanic, the experience becomes sort of disappointing after you get over the initial hilarity of the premise. 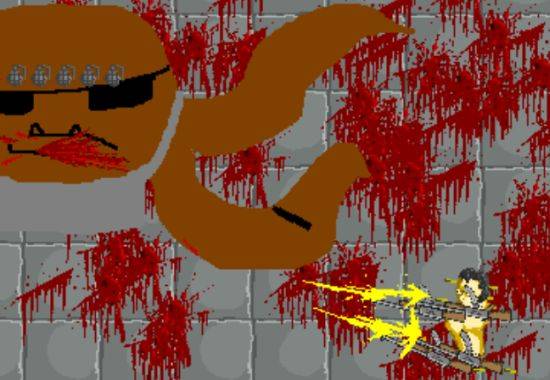 It’s a good thing, then, that you won’t get over the premise until you’ve beaten the game at least once. Yeah, the controls suck, and yeah, it’s intentionally ugly, but it’s funny and manly and gory and silly as hell. GUNLIMB is high-concept, and while it doesn’t necessarily deliver on that concept in the way it deserves, the fact that the game exists at all is worth appluading. It’s flawed, but you’ll never forget playing it.

Download it here, and become twice the man you were beforehand.