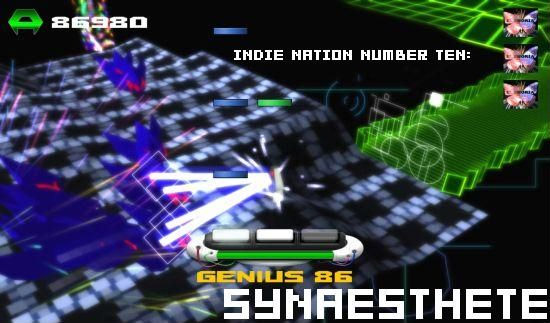 Yes, that is the ugliest post picture ever created. Don’t let it dissuade you from playing this awesome game.

I’ve been putting off an Indie Nation article on Synaesthete for a while now, partially because I wanted to chronologically distance it from that time I said it was better than Rez HD, and partially because I’m worried I’ll build up your expectations too much to the point where you assume it cures cancer.

Never say never, though: this week I’m highlighting Synaesthete, and I’m here to tell you that this free download is more than worth your time. It won the 2008 IGF award for Best Student Game, and with good reason: it melds trippy visuals, a great soundtrack, and fast-paced rhythm/action gameplay into a title which delivers on the concept of interactive synaesthesia better than any other game I’ve ever played.

Crap, I’m building it up too much. Just pretend I didn’t say any of that, okay? Go here, download it, play it, and maybe enjoy it. Maybe. It’s okay, I guess. Pretty decent. Nothing special.*

*Actually, it sort of is. Hit the jump and see why.

Since I’m fully aware that the above post pic is hellishly cluttered, here’s a gameplay video:

Basically, you use WASD to move around while tapping the J, K, and L keys in time with the music. That’s it. The I key activates special powers, but, if you’re playing the game correctly, you shouldn’t even need them.

Synaesthete is probably one of the most enjoyable indie games I’ve ever played, and I don’t say that lightly: its single-minded focus in combining the rhythm game with a (for lack of a better genre approximation) beatemup is just familiar enough to be totally accessible, while still feeling totally original in its execution. In mechanical terms, Synaesthete doesn’t really add anything to the rhythm game genre other than giving the player the ability to move around, but that’s somehow enough.

While the player stares at the stream of beats, constantly endeavoring to hit each one, he most also simultaneously dodge wave after wave of neon enemies. At first, it seems literally impossible to both dodge baddies and play the rhythm game at once, after a few minutes of heated play, the combination of the two actions almost becomes second nature. Once you realize that your damage increases depending on how well you time your beats, and how close you are to your enemies, the game becomes even more intense. You see the enemies out of the corner of your eye as you focus on the beats, or vice-versa; your difficulty with the dodging/rhythm gameplay will vary based on individual skill, of course, but after a while the music and the dodging gameplay meld into one cohesive, utterly satisfying experience.

Understand that I was dancing throughout the latter half of my playtime with Synaesthete. Well, maybe not dancing so much as oddly  gesticulating in my chair, but I was still moving to the beat of the music. One might be tempted to call it grooving. Regardless of what you wanna call my repulsive spasms, however, I’ve never been prompted to make them in any other rhythm game environment outside of the odd Guitar Hero song. I’m not even a big fan of trance music, but the way in which the techno-riffic music complements/serves as the basis for the gameplay somehow got to me. It is very difficult not to at least bob your head while playing Synaesthete.

Compared to Synaesthete‘s, Rez‘s soundtrack might as well be the Best of Jack Johnson. The songs in Rez never really amped up until the boss fights or the later worlds; Synaesthete‘s music takes a lot less time to get, as the kids would say, thumpin’. Synaesthete is more fast-paced and fun than Rez. Synaesthete is prettier than Rez. Synaesthete is longer than Rez. I’m sure many who play both games will totally disagree with me on some or all these fronts, but I remain steadfast in my opinion that this little Digipen student game is a heck of a lot better than Mizuguchi’s cult classic rail shooter.

There’s not much more to say about Synaesthete, save to reiterate that it’s really good, really free, and really worth the download. It’s fun, it’s pretty to look at and listen to, and there are even some goddamn boss fights. Which is awesome.