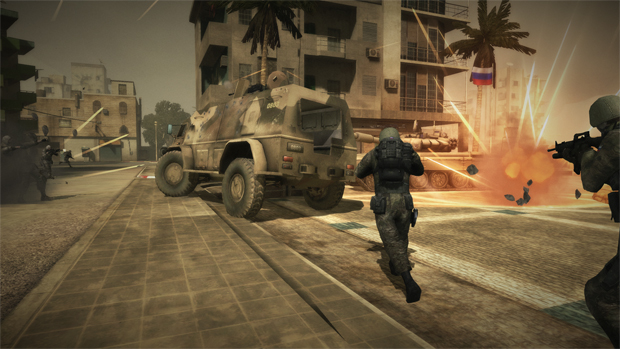 Easy Studios’ Battlefield Play4Free has been available to everyone willing to give it a download as of this week. The free-to-play, pay-if-you-want PC game is currently in open beta. I figured I’d give it a spin, and spout off my general thoughts along the way.

If you’ve ever touched a Battlefield before, you’ll know what to expect. Teammates hogging the cooler (see: useful) vehicles, some dumb person who won’t stop honking his horn (and another guy who spends the whole match complaining about said honking), the standard classes, and lots of spotting enemy troops.

Play4Free comes off as a mix between Battlefield 2, the Bad Company titles, and the other free-to-play game, Battlefield Heroes — basically, a combination of everything to come before it.

I want to quickly point out that if you’ve played Heroes and didn’t care for it, this might be more your speed. That was certainly the case for me. 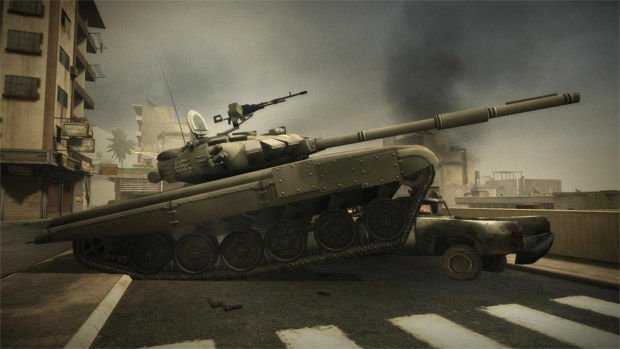 So, to start, you pick a soldier. As expected, you get to choose from Assault, Medic, Engineer, and Recon. Standard Battlefield. What’s interesting (not in a good way) is that once you have your class, you’re kind of stuck with it — unless you want to pull out the ol’ wallet.

Unfortunately, this has an ill effect in that it severely limits the flexibility of either team. Presumably, the average player will only have one class to work with, whereas ideally, everyone should be able to switch to the class most appropriate for the occasion while in a match. Y’know, strategy and all of that jazz?

For example, as a Medic, I’m pretty much boned when a tank rolls up. I can throw grenades at it (more on this in a second), or I can run away. Most likely, though, I’ll just die.

Here’s the thing about grenades, and even certain vehicles: you can’t use them right away. Yeah. New to Play4Free is a Training skill tree. By leveling up your character, you’ll get access to points which can be applied to things like jet pilot training, throwing frag grenades, and a directional damage indicator on your HUD. I can see why such a system would be implemented — they want our time and money — but that doesn’t mean it’s a good decision from a user-experience point of view.

That leads to the obligatory section about microtransactions. Expect lots of pitches for unnecessary things to be thrown in front of your face with no shame whatsoever. To give you an idea of how the dollars-to-points scale is set up, $4.99 gets you 700 Battlefunds. An M1911 for 30 days of use costs 140 BF, and permanent use of that same pistol demands 280 BF.

Now, most items can be “bought” with credits instead, if you’d like. (You would.) Credits are earned through regular play and don’t require any real-world commitment, other than the time it takes to earn them by playing Battlefield Play4Free. Additionally, you can purchase boosters to increase the amount of experience points and credits awarded.

This stuff is a necessary evil of the free-to-play model, it would seem. Thankfully, the kit you start with is sufficient enough, and for the most part, swapping out for better gear doesn’t require any financial commitment. Balance naturally takes a hit — especially when it comes to the aforementioned restrictions on class switching and Training — but not to the point where you’d want to punch old ladies. 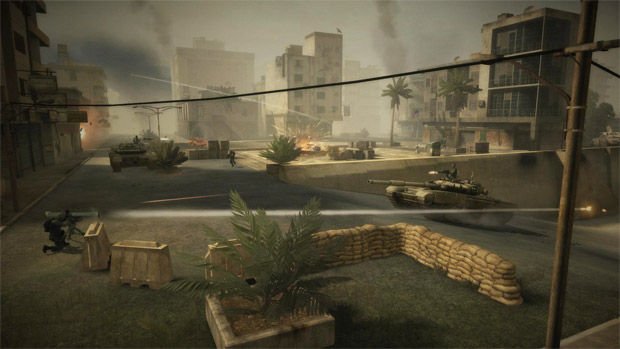 So … shooting dudes in the face. How’s that feel?

Pretty good, mostly. Play4Free may be less balanced and polished than its non-free counterparts, but it’s still Battlefield, and there’s still some level of fun to be had.

It’s not ideal, though. Spawn points could be improved, there could be more content (maps and modes), and throwing in a little personality would go a terrifically long way. Also, not being tossed into a random match — one that could be seconds away from being finished — would be nice. Granted, this is a free videogame, and it’s in beta. I can’t be too much of a dick here. (That said, I’d be surprised if any of these complaints, other than more maps being introduced, ever get addressed.)

As far as games of this nature go, Play4Free could be a hell of a lot worse. As it stands, you can boot it up and fairly quickly recognize the game as an “alright” Battlefield experience. Some people are going to be perfectly content with this, and more power to ’em.

Basically, Battlefield Play4Free isn’t worth playing if you have access to any one of the recent Battlefield titles. And you totally should. About all it’s truly got going for it is the lack of a required price tag, and you could argue that the lower (but not completely dated) visuals are ideal for those with lower-end PCs.

If I were still twelve years old, and I couldn’t afford to purchase a proper Battlefield game — meaning I wouldn’t have much context to work with — I’d think that Play4Free was awesome.