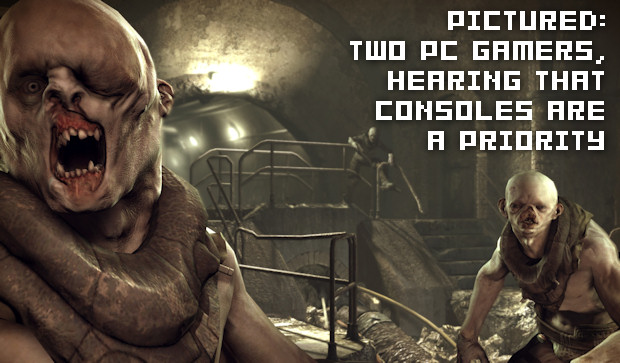 Game Informer has landed on doormats around the nation, and with it comes fresh details on id’s brand new shooter, Rage. The game puts players in the boots of a fortunate asteroid strike survivor, who awakens from suspended animation in a massive underground Ark.

As is typical of such places, the Ark is full of dead bodies and ruined databases. Unfortunately, the surface world isn’t much better, now a desolate wasteland ruled by mutants and bandits who live in fear of a sinister organization called “The Authority.” No prizes for guessing what you’re going to have to do to said sinister organization.

“The largest chunk of our market’s going to be on consoles,” says John Carmack, confirming that this is going to be made with the PC version as a secondary consideration. “I mean, yes, you can use the mouse for it but it’s critical that the controller be the way that we design the game.”

The PC version will offer higher resolutions, more anti-aliasing and faster texture page-in, but otherwise will be indentical to the console versions. Carmack adds that the Xbox 360 version could run to three discs, though this is proving difficult since id won’t make “arbitrary cuts” to split the game up.

Phew, that’s a lot of stuff. Finally, multiplayer is yet to be finalized, but they’re working on it.