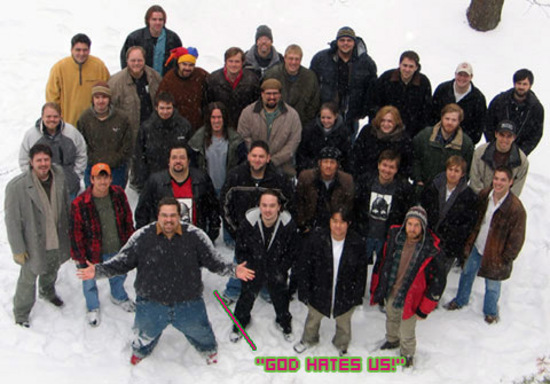 Human Head Studios, creators of Prey and owners of an oddly disturbing Dr. Octopus-esque website, are probably in the market for a new office, since theirs was wrecked partially damaged in a fire this morning.

Channel3000 is reporting that there were no injuries and that damages will cost an estimated $750,000. The cause of the fire is still undertermined, although possible suspects include God, who is still pissed that the Prey multiplayer was so laggy. Apex Property Management and Warren Heating share the building with Human Head and don’t really appreciate being caught in the middle of Yahweh’s pissy fits. Unfortunately, righteous smiting isn’t covered on most insurance plans.

The building is actually an old warehouse which, while providing great atmosphere and general spookiness, is probably lacking in vagina doors.