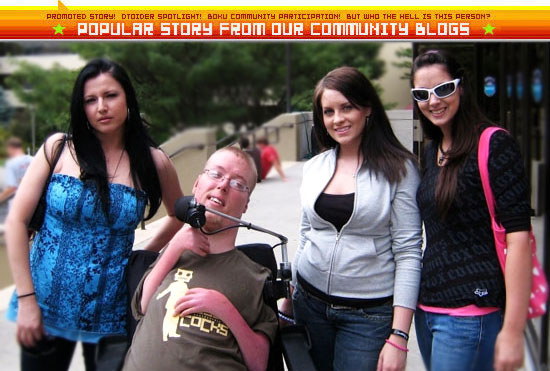 I got back from MLG Meadowlands today, and while I was there I chilled with a lot of friends I haven’t seen in a while, but I also met some really awesome people. There was one person in particular, who I simply thought was amazing. His name is Randy, aka N0M4D. Placing 17th place in Rainbow Six with his team at their very first tournament last event, they were hoping to do better at this one.

I’m not sure what place they got, but I think he said they got to 4th round. I didn’t get to talk to him much, but I did manage to give him one of Dtoid’s coveted “Also Cocks” t-shirts and score a picture with him.

Nomad was born with a rare muscle and joint disorder called Arthrogryposis that has confined him to a wheelchair and left him without the use of his arms or legs. While this disorder might have kept many others in similar positions away from the heated atmosphere of the professional gaming world, Nomad came to Charlotte and proved that he could compete with the top players on the circuit. He truly inspired the players around him, not only by being a talented member of his team, but also through his upbeat personality and friendly nature

Like it says in this article, by just watching his screen you can’t even notice the difference between him and his teammates. With his slightly modded controller, it’s simply amazing to watch him play. What’s most impressive is that not only can he play completely with his mouth, but he’s actually great. He is much better than most people could ever be at Rainbow Six.

Along with gaming, he’s also passionate about graphic design. I believe he said he either has a job in graphic design or is working on having that to be his career. I got a small clip of him playing before I got kicked out from behind the ropes. Sorry it’s not the best, but I got what I could.

He also an interview he did with Fox News.