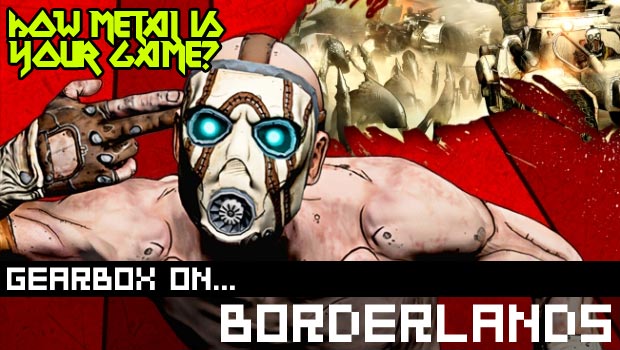 Metal is a lot of things. Metal is ripping off a chimera’s head and spitting down its spine hole. Metal is the swagger of a cool protagonist as he walks out of a bar full of corpses he created.  Metal is a tone or a plot. Metal is an f’ing feeling.

For the Borderlands crew, metal takes some serious space to describe.

“How f–cking metal is Borderlands,” game creative director Mikey Neumann asks me in response to my question. “Well, I can’t really give you the full answer in such a truncated space, but I can show you an excerpt from our upcoming book How F–cking Metal is Borderlands.”

And show me an excerpt he did. Taken from the middle of the fifth chapter of the upcoming best seller, the bit of the book deals with a meeting of sorts between members of the Borderlands crew and an unassuming teenager at a local Denny’s.

“This is taken from the middle of chapter 5 entitled: ‘The Steel-clad Chi of Being Fucking Metal All the Time and How to Interact with Everyone Else,’ “ Neumann tells me, finishing his thoughts on how to describe metal in such a truncated space.

This is the excerpt:

I remember a time when none of us at Gearbox were really sure just how metal would could make a game.  A specific conversation comes to mind from mid-2006; I believe somewhere around October.  I was sitting at a table in the back of a Denny’s with Randy Pitchford and Jason Reiss.  We were discussing just how metal a game can be before you really start gambling with upsetting the balance of the universe and potentially destroying existence entirely.  You know, waffle talk.  Borderlands was in such a shy infancy at the time; the elements were being assembled but no one had any idea what we were in store for.  So we start shooting the metaphorical shit, and if I remember correctly, it was Jason who posited, “Well, what if we just make a game so freakin’ metal (swearing gives him nightmares,) that any game that dares come later will seem about as metal as an episode of Laverne and Shirley.” I stroked the cursive L on my chest as I pondered his sentiment.

If we do that, won’t that preclude us from making any follow up material?  Shouldn’t we leave ourselves some space to outdo ourselves should a later need arrive?” Randy suavely said to the two of us. Clever Pitchford, clever. The man had a solid point.  If we concentrated on making our game too metal, it would leave us no room to come back and rock the world a second, or god-surviving, a third time. So, the obvious solution was to make a game that was 99% of the way to total, blood-soaked, guitar solo written by the tears of the devil, mayhem.

I proposed a possible solution. What if I were to test our mettle (that is a classic pun, I expect my award is already in the mail) on a random passer-by (in my story, Denny’s is a high traffic area, hush.) They had understandable trepidation with the danger of this plan. It could backfire, and no one likes going down on a murder one beef. But I seized an opportunity while they nursed their vaginas back to health quietly at the table. A skinny teenager, probably around sixteen years old, walked past our table holding a delicious looking Grand Slam breakfast. I asked him politely if he would like to see something “cool.”

My eyebrow went up as I paused to find the best way to lure him in. If I explained the true nature of my experiment he would surely cower in terror.  I said, “Spin Doctors cool, broseph” (that’s how teenagers talk to each other.  When you encounter them in the wild, you have to speak their native tongue.) He obliged and walked closer, but did not set down his plate. Randy then proceeded to explain the entire game to him. From start to finish. Every detail, every nuance, every midget punted off the planet into low-level orbit around Pandora … all of it. When Randy had finished there was a long silence where the kid said nothing. He just stood there, trembling.

Which is when he turned into an eighteen foot tall, three headed serpent sporting 26 guitars all playing in perfect 26-part, face-melting, harmony. It was a single song lasting forty seven minutes before ending in a pyrotechnics display worthy of a Steven Seagal straight-to-DVD masterpiece.  This left most of the patrons in the establishment charred and dying, albeit cheering loudly until their vocal chords were burnt out of their throats.  When the serpent had finished his solo, he withered and fell to the ground before turning into a dry white ash and perishing in our presence.

“Yeah, that was pretty metal” Jason said as he casually poured more raspberry syrup over his waffle.”

“It does go on from there,” Neumann teases me, “but obviously I want you guys to check out the book when it comes out. The serpent does resurrect itself later in the chapter and play a second zombie-laden set with three encores.”

Notice how much fucking metal is involved in the latter sentence. Neumann is a metal machine, a regular fucking monster of metal. He continues. “You guys can check out the game and judge for yourselves until your mom grounds you for transforming into a living demon with excellent eye-hand coordination.“