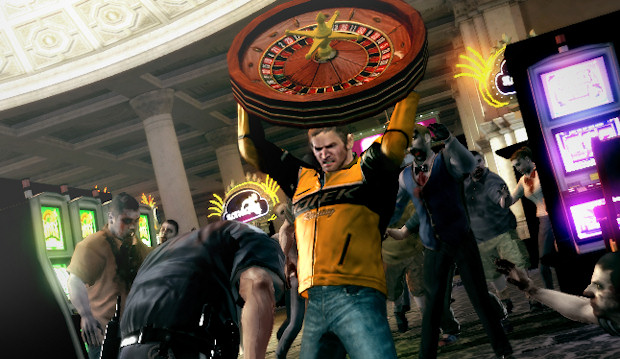 Like most young modern men, I love zombies and have waited eons for a game that truly captures what it’s like to go toe-to-toe with the undead horde in the most violent and brutal way possible. You can imagine then, that Dead Rising was a dream game for me, since it just puts you in a shopping mall, drowns you in imaginative weaponry, then lets your sadistic brain do the rest.

In theory, it was brilliant. In practice, however, Capcom managed to totally stuff it up.

I’ve given Dead Rising more than one chance over the years, so desperately have I tried to enjoy it. However, the game demands so much forgiveness and effort that Capcom should have been paying the gamers to play it. I don’t spend $60 to do what is, essentially, manual labor. I have tried to like Dead Rising, but it’s just not worth the effort.

That said, the team has a chance at redemption with Dead Rising 2. Now set in Vegas and promising roulette-wheel-on-zombie-violence, I am prepared once again to risk interest in the sequel on the strength of a premise that I’ve always wanted in a videogame. Since I am an arrogant blogger who thinks big-time publishers should listen to me, I’ve written out a list of things this game can do to not suck.

Don’t deliberately make the main character piss-weak in the hopes people will restart the game constantly:

This was a pretty lame trick by Capcom in the original game. By making Frank West as weak as a toddler’s fart, but allowing players to carry over stats into a new game, the gameplay was falsely extended. Rather than provide a longer, deeper campaign, a kind of faux replayability was instead encouraged. Not only was this a rather cheap way of encouraging replay, it also put a large barrier between players and the thing they wanted to do the most — fuck up zombies.

Having to slowly level up so the hundreds of zombies don’t thoroughly kick your arse was annoying, because Capcom was essentially dropping you into a huge violent toybox and then wagging its finger at you, smugly saying “Not yet, little one. Not yet.” The fact that a zombie can, seemingly at random, just grab you at any point and reduce your health is rather annoying. Don’t give me a mall full of baseball bats and skateboards and then tell me I have to wait before I can start really braining those undead bastards.

Another real drag with Dead Rising was how everything was segmented off, bookended with tedious loading screens. In a post-GTA IV world, this hopefully won’t be a problem with the game’s sequel. Nevertheless, it bears mentioning that the fact that Dead Rising was cut off into small sections really hurt the feel of the game. I understand that Capcom put a lot of zombies into each area, but I’m sure they weren’t so taxing that we couldn’t have a more open, faster loading game.

The feeling of a more cohesive, open world lends itself well to the idea of a zombie apocalypse and while Dead Rising came close, it didn’t provide the kind of large world I was hoping for. The Vegas-like setting of Dead Rising 2 could truly expand the game, and I hope it does.

Put more variety into the missions:

It seems that Dead Rising‘s gameplay mainly consists of two things: Fighting psychopaths who all seem to have convened in this one random mall, or taking part in some of the worst escort missions known to man. Neither of them are particularly pleasant, either. The psychopath battles are rather drawn out and boring, while the escort missions are … well … we’ll dedicate a whole section that those little sparks of genius.

Dead Rising 2 could benefit, I feel, from a more GTA-like mission structure. Different mission spots throughout the environment that can be tackled in any order you like. Doing specific jobs for different people. There is a lot more than can be done within Dead Rising‘s setting, and I think the sequel would benefit from a much more flexible and varied mission structure.

Either have competant AI or scrap the stupid fucking escort missions altogether:

One of the most common complaints had with Dead Rising, and it’s a complaint I back wholeheartedly, is that the all-too prevalent escort missions are absolutely fucking horrendous. The mall is full of survivors that Frank West can choose to rescue for Prestige (Experience) Points, but quite how they survived this long is anybody’s guess. They seem completely unable to hold their own in a fight against the zombies, and would rather run headlong into a huge crowd of them than actually follow you to the safe zone. It doesn’t help that they like to get stranded in very faraway places, often turning rescue missions into inconvenient and irritatingly lengthy ordeals that can be failed simply through bad luck.

My final attempt to enjoy Dead Rising was ended by one of these stupid missions where, after having to fight with the stupid cunts to get them to follow me in the first place, slogging through two screens of zombies, having to abandon one of the two survivors because he wouldn’t follow me, trying to survive against the three prisoners who shoot you from the back of a vehicle and FINALLY getting the moron right near the exit, he ran in front of me while I was attempting to punch a zombie and was smacked stone cold dead. That right there is a “fuck this shit” moment.

Unfortunately, too much of Dead Rising was a “fuck this shit” experience. The game demands far more patience and hard work than it deserves. I don’t buy videogames to feel like I’m doing a chore.

Seriously, was this fun for anybody? Let’s not have an entire area of Dead Rising 2 sectioned off by a trio of fuckchairs riding around with their contemporary music, firing machine guns at you and anybody you’re trying to save. As already explained, the escort missions are hard enough. They are a complete joke when you throw in three escaped convicts who have decided that shooting people is more sensible than avoiding zombies.

One of the most frequently annoying aspects of Dead Rising was Otis, the mall janitor who gave you a walkie talkie, apparently for the sole reason of having someone to talk to. Like a clingy fucking girlfriend who doesn’t understand that you don’t want to see her anymore, the stupid prat with nothing to say will call you constantly, explaining in more detail than is necessary, that some stupid chumps need rescuing somewhere.

Perhaps it wouldn’t have been so bad if it wasn’t, like most things in the game, more work than is necessary. However, in order to speak to Otis, you first have to put up with an annoying ringtone that WILL NOT STOP until you press on the D-Pad to answer it. Frank will then hold the walkie talkie, unable to attack or jump, while tiny text appears on the screen and stays there for longer than is needed, representing Otis’ silent and lengthy information that could have been explained in two seconds of quick, automatic speech. You know how some games can just TELL you things without forcing you into defenseless animations and making you read small, boring text? Yeah, I like games that do that.

Was it really necessary to have a walkie talkie at all when the text could just scroll on the screen while you’re actually, I don’t know, playing the game? No, apparently Otis is the most important person in the history of games who will actually REPEAT himself if you leave an area and go to a loading screen while he’s talking. Yes, he will actually complain that you cut him off because you wanted to actually play the game, and will then re-explain stuff he already told out.

I know it gets lonely during a zombie apocalypse, but seriously Otis? Are you that attention starved? Have a fucking wank or something. You’ll feel better.

A recurring irritation I seemed to find in Dead Rising was the inability to handle the many items properly. As if relegating weapons, health items, and stat-boosting books in just a handful of item slots wasn’t bad enough, the fact that you can’t default to basic fists just makes it ridiculous. Many times during Dead Rising, I’ve been found without a good weapon to hand, but unable to defend myself because all Frank’s holding are books. Rather than default to some punches when attacking, the combat button instead makes Frank stop and read the book, leaving him prone to inevitable zombie attack. Just more needless bullshit in a game full of needless bullshit.

Perhaps having separate sections for books, items and weapons, rather than lumping them all in together, would save on frustrating. Perhaps not having Frank stand like a stupid reading idiot in the first place could have helped as well.

Yep, that’s right. For all my complaints about Dead Rising, the one thing I will defend is perhaps the most common complaint of all. Dead Rising‘s punishing and cruel save system is one of the few truly successful experiments in the game. I used to condemn the save system myself, but upon giving Dead Rising its most recent chance, I have since changed my tune. Having to make sorties out into the zombie-infested mall and back again in one piece feels risky and adventurous, and if you make sure to set out and do specific tasks between each save, rather than randomly running around trying to do things without a game plan, it’s really not that bad.

I also really like the fact that the game has a 72-hour time limit. The idea that, no matter what happens, a helicopter will be coming to collect you in three days made the game feel more alive and was a real breath of fresh air compared to the linear progression of most games. That said, it’s a shame that the main story of Dead Rising was, itself, quite linear and very unforgiving. Multiple paths, and the ability to experience wildly different stories within each 72-hour game, would have truly made the most of the game mode, rather than turning it into yet another punishment and an excuse to force players into restarting the game.

Game franchises sometimes run the risk of keeping bad things and getting rid of good things, and I really hope that Dead Rising 2 maintain the timed mode and save system, while improving in the many, many areas that the original game needed improvement in. Unlike many games, this is not one I found easy to write off. I really want to like the game, and genuinely envy those with the patience and/or masochistic tendencies to suffer through its multiple layers and bullshit and find the fun that Capcom dangles just out of reach for most of the game.

Some of us don’t quite have that Marquis de Sade-like capacity for torment, however, and would rather have fun with our games straight away. I sincerely hope Dead Rising 2 has such fun.