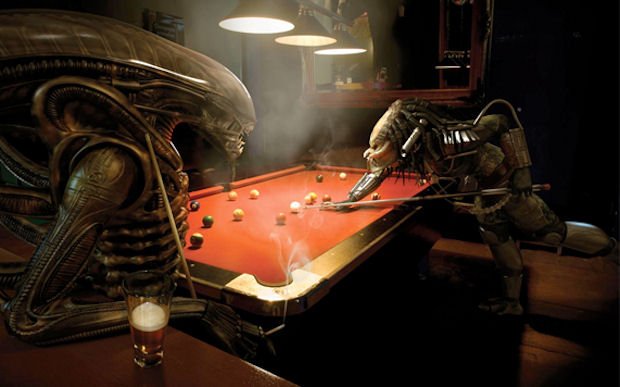 Aliens vs. Predator is out next week, and while opinions are divided as to whether or not the game will be any good, there is one universal truth that cannot be denied — Aliens are blatantly better than Predators. This is an undisputed fact that only idiots and Danny Glover would disagree with, and I make an obvious exception for The Glove.

Everyone else, however, deserves to die if they believe a Predator is better than an Alien in any way, shape or form. In order to prove just how wrong they are, I present a list of evidence in an article that one could accuse of being only spuriously linked to gaming at best. If you are pathetic enough to deny the superiority of Aliens right now, you will soon change your ways when reading this article.

So, allow me, the Queen of Right, to lay Eggs of Truth full of Correctness Facehuggers that will rape your stupid face and put a Not Being Wrong About Sci-Fi Chestburster inside you.

Predators are cowards at best, pussies at worst. They like to pretend that they’re honorable hunters, trained as ancient combat masters and honed to survive the most brutal of battles, but they are actually chicken babies who are more scared than a mouse of getting involved in a fair fight. Aliens are real predators, relying on natural skill not afraid to get up in your face if need be. Predators are bitches.

First of all, they have that cloaking device. This is because they love to hide from everyone because they are wimps. Also, they only seem to pick on species that are technologically inferior or physically weaker than them. Ooh, such a brave hunter! How am I supposed to respect someone that only succeeds because he has artificial advantages. He has a mask that can see heat, a shoulder-mounted cannon, wristblades, killer frisbees, a sci-fi spear, mines, and an exploding arm bomb that he’ll use to pussy out of a fight if he loses … which he always does.

There is nothing to respect in a Predator. I don’t know how they can ever feel that they’ve done a good day’s work.

The newest Aliens vs. Predator game features first-person secondary jaw executions. That is, obviously, the coolest thing to have ever happened in a videogame, ever in the history of ever. You get to see it go right in the stupid heads of Marines and Predators, and it’s both very hilarious and vaguely sexual. Sure, the Predator can pull a head off, but he can’t stab someone in the face with a tongue … in first person.

In fact, the Alien has the consistently better executions in AvP. It can stab a Marine in the back with its tail and then have it come out of the fool’s mouth. It can stab its fingers into a guy’s eyes and shake his head around and then yank it off. It can slit a man’s throat and he’ll be all choking (like an idiot) with his neckpipes hanging out. The Alien can get another Alien and then slap it in the face with its tail, but then you find out that it didn’t slap it, it fucking cut it, and the front part of the Alien’s face falls off!

If you’re still under the illusion that the Predator is better, you’re retarded and you don’t even know.

It’s a well known fact that the Alien was designed to be phallic, and their very existence is based on sexual domination. With their long, ridged heads and snapping tongues that shoot from the mouth with penetrating speed, a Xenomorph is the very physical representation of an evil walking penis. Meanwhile, take a look at the Predator’s ridiculous face. It’s another well known fact that the Predator has a mouth like a gaping cunt. It probably stinks like one, too. If Aliens are giant penises, then Predators are massive minges.

I’m not saying that male organs are better than female ones, but if there was a fight between a cock and a pussy, I’d be putting my money on the one that can rape. Again, I’m not saying that rape is a good thing but … y’know … it’s a better combat tactic than being able to maybe squirt some stuff if the woman tries hard enough and doesn’t accidentally piss herself, which is about the only thing a vagina can bring to a fight.

The basic jist of it is that Aliens can rape Predators in the mouth. Predators can’t even squirt stuff. Ergo, the Alien wins!

Aliens can climb on walls:

Spiderman can climb on walls and Spiderman is good. Using this same logic, Aliens can climb on walls and Aliens are good. While morons and women complain that they can’t use the Alien in AvP because the wall running “disorients” them, people who are actually smart can pick it up in about two minutes, and quickly learn enough spatial awareness to realize that if you’re upside down, you’re probably on the ceiling. That’s about all the “orientation” you need, and if that confuses you, you’re a fucking prick.

Everybody wishes they could climb walls. If you could have any super power in the world, you’d pick the ability to walk on walls. Don’t argue this. I know right now you’re thinking, “Actually I’d like the super power to have sex with Grace from Will & Grace whenever I want” or “I’d like the power to turn into Flying David Bowie.” However, that’s only because you are fantasizing. If a real-life, nitty-gitty, important life decision hit you in the face, you’d trade in your whimsical ideas and go for walking on walls. It just makes more sense.

Things you can do with the ability to walk on walls:

Undeniable proof of the Xenomorph’s greatness, yet again. I thank you.

We’re getting quite good at keeping this weakly linked to videogames, so let’s point out that Aliens games have consistently been better made and much more fun than shitty Predator games. Let’s face it, when was the last Predator game seriously good? I’m talking the Predator on his own, not piggybacking on the Aliens to get into a good title. I think you’ll find that the best Predator game was on the Commodore 64, and even that was pretty fucking horrible.

Meanwhile, I can name a bunch of solid Aliens games. We have Alien Extinction in the arcades,  Alien 3 on the SNES and Genesis, Aliens Online on PC, Alien Trilogy on PSOne and some other ones probably! I hereby use this staggering evidence to state that the good Aliens vs. Predator games, like the Capcom beat ’em up and that Jaguar one, were only good because of the Aliens. Meanwhile, all the bad AvP games, like the ones based on the movies and the strategy game everyone hated, were bad because of the Predators. You can’t deny it. It’s simple science.

What’s another name for a pedophile? A sexual predator! You’ve never heard anybody call Roman Polanski a sexual alien now, have you? No, he’s a sexual predator, just like The Original Night Stalker, Mike Tyson, and all of the Rolling Stones. There is absolutely no reason to believe that the Predator doesn’t also hunt little children once he’s done stalking Arnold in the jungle. Hell, the first Predator film is set in Guatemala, which is probably where child trafficking happens, right? It sounds close enough.

There is video evidence as well! Anybody who likes Predators is clearly a dirty pervert and their online handle should be reported to police if you see someone pick them in AvP. Fucking disgusting.

Aliens are called Xenomorphs which is a cool word:

Xenomorph is a cool word. It begins with an “X” which is officially the coolest letter of the alphabet, and it ends with “Morph” which is the name of a cool claymation cartoon starring a little brown man, and I’m not being racist, he was brown and you can check if you don’t believe me.

You may not know this, but names for the Predator as a species have also been declared in comics and the like. According to some sources, the official name for a Predator could be Yautja or Hish. Yes, you may have already noticed that they are SHIT names as well! No letter X, no cheap and cloying reference to old childrens’ cartoons. Just stupid, made-up words that sound rubbish. Once again, the Predator demonstrates that it is only likable to people with brains made out of piss-soaked rags.

I will murder your Predators in AvP:

If, for some unbelievable reason, you still don’t believe that Aliens are the best, then feel free to demonstrate the insectoid Bob Marley’s prowess in physical combat. I can destroy any Predator, hands-down, in a single match of Aliens vs. Predator. Being good at games makes me a better person than you, so I hereby declare that if anybody can get more kills with their Predator than I can with my Alien in an AvP match, I will let them kick me on my arse in person.

Aliens are blatantly better than Predators and I will prove it. So shut up.