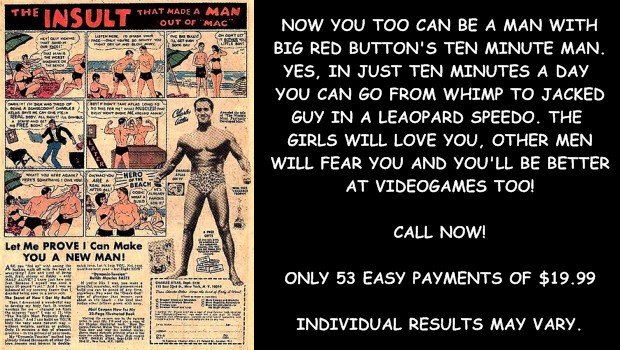 Big Red Button Entertainment has filed a trademark registration for what appears to be the company’s first game. The game is called Ten Minute Man and of course has no official system for release on nor any real information other than the intriguing title. We of course assume the game will be longer than ten minutes, but aside from that the possibilities (and sexual inuendo) are endless. However, judging from BRB’s motto of creating “games you can watch and films you want to play,” we’re guessing this isn’t just some collection of ten minute long mini-games, but an epic story of epicness.

Why should you care about Big Red Button or their upcoming game? Because the company was founded by Bob Rafei and E. Daniel Arey, two former Naughty Dog employees. Both of them were heavily involved in the creation of Crash Bandicoot, Uncharted and Jak and Daxter. The Big Red Button site has a relatively interesting piece of concept art on its front page too. Could this be our ten minute man or just a guy who broke his glasses?