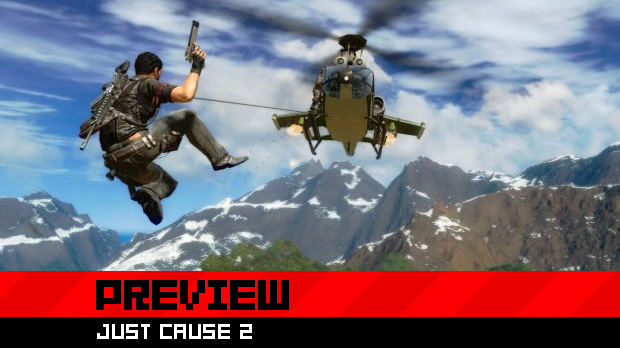 For as long as games have been a popular form of entertainment, they have always had to have a special trick. Sure, we don’t want to call it a “gimmick,” but there will ideally be a “special something” in a game to make it stand out from the pack.

Almost four years ago, Eidos released a game called Just Cause for the Xbox 360, Xbox, and PlayStation 2. Back then, the big selling point was the parachute mechanics coupled with the stunt system and the goal of overthrowing a corrupt island government set in the tropics. The game went on from there. While far from perfect, it was a fun experience with neat ideas.

But it has been four years. Eidos is now in the process of transforming into Square Enix Europe; nobody would dream of down-porting a game to the original Xbox and PS2; and the 360 and PS3 are regularly put through their paces. Would Just Cause 2 even offer new stuff to wow gamers? It’s a whole new world, but it seems like developer Avalanche Studios is hoping to improve Just Cause 2 in an entirely cohesive way. Beside checking out Avalanche’s live streaming of the game, hit the jump for my hands-on.

So what can gamers expect? Well, there’s still a lot that is the same in Just Cause 2. The island is about the same size as in the previous game, the plot is similar, and even the biggest improvement — the grappling system — was in the first game, albeit less developed. So why should we care? Because Avalanche really seems like they have taken what they learned from the original and improved everything to its next logical step.

For example, while the actual size of the island that you’ll be playing in is no bigger than the original, that doesn’t mean Avalanche is going to limit the scope of the game. Steps have been taken to increase the vertical elements of the game. Huge mountains jut upward from the landscape, begging for Rico Rodriguez to jump off and soar across the island. The city areas of new island Panau have massive buildings to swing from, and there are insanely high bridges. Yeah, most of these existed in the first game, but this time around, there’s that much more going on in the sky.

You can actually shoot dudes while using the hook. Toss out the hook, zip-line across to a building, and before landing, throw out the chute and use the momentum to soar up in the air. Or grab a guy by the hook, attach him to another guy, and slam them together. It gets even crazier. For example, one of the fun things the PR representative showed was to hook a guy to a gas canister. He then shot the bottom of said gas canister, and sent the enemy spinning at an unnatural speed through the air. Good times.

While the grappling hook is not like Bionic Commando (it functions more like a zip line as opposed to a Spider-Man web-swing), there are going to be plenty of play options with this tool. Anything can be grabbed, and scaling buildings hundreds of stories tall with this tool while shooting guys is incredibly satisfying. Also, the vehicle stunt abilities are back, and the parachutes are still integral to the game. With the even more vertical focus of the game, it’s very easy to spend more time in the air, on top of racing cars and boats, hanging under a hovering helicopter or zooming down a mountain than actually running and gunning. It’s all over the top and outlandish.

Like the game before it, Just Cause 2 is going to offer a lot for people who just want to screw around doing insane things only Dew’d-out bros would perform in real life. Between the grappling hook, the parachute, and the over-the-top vehicle jumping, along with all of the gunplay, upgradeable weapons, and silly plot, there promises to be a bright action game to look forward to next spring.

Those interested in the plot of Just Cause 2 — yeah, there is a plot — will find that the years have not been so kind to main man Rico Rodriguez. He has got a grittier and more macho look to him now, and when you take the grappling hook mechanic into account, he comes off as a mix between Chris Redfield circa RE5 and the dude from the newest Bionic Commando. Bad-ass? I suppose.

No longer is he dealing with the problems of a tropical Caribbean-themed island; this time, he is leaping about on a tropical southeast Asian-themed island called Panau. It seems he is helping some socialist-minded citizens (led by an attractive woman with a penchant for calling everyone “comrade”). Typical evil-dictator-with-awesomely-bad-name Baby Panay is the man to take down, and you’ll be gaining a hold over certain areas of the island. With desert, tropical, mountainous, and swampy coastal regions to take over, Panau has a lot to see and do, and those 400 square miles look to be full of missions to blast through.

Avalanche has some new tricks to make the game look better than ever. While the actual character models seem to be pretty standard, the textures of the game are leaps and bounds over the original Just Cause. They go really far toward creating awesome-looking vistas. Draw distances are great, and all the explosions, heat effects, and firepower in-game look awesome. If I have one complaint, the rag-doll effects are pretty simple. Shoot a dude, and he’ll flop like a dead fish. When everything else looks so great, I hope the models can receive a boost before this game releases next year.

In the end, I’m saying fans of the original Just Cause should pay attention to what Avalanche and Square Enix Europe are hoping to do with this sequel. There doesn’t seem to be a radical change to the series, other than overall improvements, and if Avalanche can make sure that all the missions are varied and dynamic, we should be golden come next year.