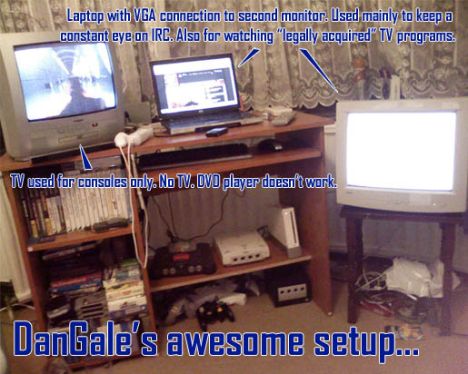 This week’s gaming setup belongs to DanGale. He has a nice little collection including an Xbox 360 controller and games even though he doesn’t own a Xbox 360.  Check out his C Blog for more pictures of his setup.

Excremento says some smart things, FooLiz details her American invasion plans, ImpossiblePlant draws Necros and I, Toneman makes an avatar shirt, European and Austin, Texas NARPs are being planned, and much more happened this past week in the community.

One awesome thing about New York is the huge Chiptune scene. I want to make it out there one day for the Blepfest concert, but in the mean time, I’ll just have to read what Phist has to say about the Chiptune scene.

Detry reminds us of some Dtoid history. If you don’t understand, don’t worry, just move right along.

Kryptinite received a box full of random crap from Mr. Wilson so Kryp filmed the unboxing. A lot of random shit is in the box with the best item being a Dreamcast.
Want to be interviewed on Failcast? Then go to Coonskin05’s C Blog.
Excremento is a man of wisdom. Take a look at his recent C Blog where he takes a look at the state of videogame journalism.
Our resident Australian blonde bombshell, FooLiz, is flying in to the states for a world tour. She’s laid out her schedule and wants to take in as much of America as she can while she’s here. Also, I promised her a trip to Six Flags.
During one of the nights of Anime Expo, Mega64 held one of their famous panels. They talked about a lot of stuff and answered some retarded questions. There’s video of parts of the panel on the latest Mega64 Podcast. madninja was in attendance and blogged about his experience with the Mega64 crew.
Scary Womanizing Pig Mask loves to draw. For his latest piece, he drew the Podtoid crew. He also likes to make hats and made this Apollo Justice hat.

ImpossiblePlant continues her series of making Steampunk versions of Destructoid editors. For her next piece, a certain Shark was featured. Notice the shark tooth cuff links and banhammer made out of an hourglass. Sooooooo awweesssoommmmmeeee.

Speaking from experience, wearing a shirt with your own avatar on it is awesome. Granted, my avatar is mass produced so it’s a lot easier for me to get something like that. However, if you’re looking to get your avatar put on something, and done good (not shitty like most places you go to in America anyway … FUCK CAFEPRESS), then check out Toneman’s C Blog to see how you can get a good avatar shirt done.
SgtBilbo just found out that he’s going to be a father. Congratulations bro, good luck with the future sleepless nights and the constant baby pooping.
Samit Sarkar is on his way to his motherland, India. He’ll be gone for a few weeks and you’ll probably notice a hell of a lot more grammar errors than usually on the front page. Seriously, Samit is a walking dictionary. Oh, and he’s also going to PAX! I honestly have no idea how the front page is going to be updated while 90 percent of the staff are going to PAX.
Reverend Anthony is looking for some HAWP themed shirt ideas. If you have a good idea, then leave a comment on his blog.

perri is working on a RetroforceGO! animation and is showing off a little preview of what he has so far. You are so not ready for this.

DtoidAustin is holding a NARP at Coonskin08’s house later this month. Want to meet other Dtoiders and get drunk off your ass? Then go to Coonskin’s.

“Thank you for calling Destructoid. How can I help you?”

Rio finally got her art piece that Ceark made of her. I don’t think there’s a greater gift then having someone draw you. It’s a very awesome feeling.

Qalamari, the YTMND master, gives some tips on what to expect during PAX. I am not sleeping at all for a week.

Gibbo got really bored so he went ahead and made a Destructoid face in Halo 3.

Happy birthday goes out to Cronosblade this week.

Interested in a Euro NARP? Then check out Mistic’s C Blog. People are going to lose some Livers.