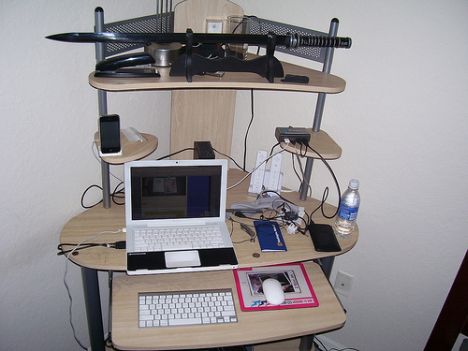 This week’s setup belongs to Kryptinite. All his “next-gen” stuff is located in one room, while the retro stuff is located in the living room. He also has some nice DVD box sets, a sword above his computer, and plenty of other awesome stuff. Check out Kryptinite’s C Blog for more pictures of his setup.

Y0j1mb0 has started up a Metal Gear Online Dtoid clan. If you have Metal Gear Solid 4 and want to play with other Dtoiders, just keep an eye out on Y0j1mb0’s C Blog for details.

blehman hates Reverend Anthony. After Rev’s Mr. Resetti story, blehman went and got Animal Crossing for the DS and has gotten hooked on the game. I feel your pain, blehman. I got addicted to the GameCube version for six months straight. I quit when I told my friend that the Koi fish in the pond we were looking at our college were worth $3,000 Bells in Animal Crossing.

superflossy had a contest where the winner would get the awesome Metal Gear Solid 4 shirt of Snake with a box on his head. Rio McCarthy won the contest with her epic Solid Snake meets Christian Bale story. Later on, Rio blogged about the shirt she won. I want that shirt!

Toneman has also started up his own Metal Gear Online clan. There are two Dtoid clans now for people to kill each other in.

Professor Pew is made of win and awesome. He has created a complete guide to the Unofficial Dtoid IRC. Everything you need to know in regards to the IRC is right on Pew’s blog. If you want to get more involved with the community, the IRC is a good place to start.

Coonskin05 is also made of win and awesome. He wrote up a 10-step guide on how to get more involved with Destructoid and the community. If you’re a newb, give this a read.

Ah, the Destructoid helmet. It’s a glorious piece of work and I’m lucky enough to have worn it on several occasions. As magnificent as it is, though, it’s also pretty damn dangerous. It has hurt several people before, and Niero blogged one of our recent internal e-mailers about our experiences with the helmet. Also, don’t try and drink Red Bull through the grates, as it doesn’t work well with metal.

Before new Dtoid editor Brad Nicholson joined Dtoid the other day, he made a C Blog of his game related cakes. Starmen, 1Up Mushrooms and even a Cactuar were made in cake form. Expect more cakes from Brad from now on in his cake making feature.

Chad Concelmo has gone to North Carolina to attend his brother’s wedding. But no one actually cares about that. What’s interesting is that there are a lot of North Carolina Dtoiders and I think it’s time to start up a North Carolina Dtoid Group. If you want to head this group up, then send me an e-mail and we’ll get something started.

Say hello to Vice. He was featured on an Art Attack Friday long ago and has finally gotten off his ass to make an account. He’s a really good artist and has some really good pieces that you should check out.

Rio found another awesome retro haul and … wait … The Weakest Link?! Sorry, that just destroyed the awesomeness of the haul, Rio.

FAILCAST Episode 11 went up this past week and they’ve changed up how the show works now. Give it a listen and then check out the Episode 12 preview beta show.

.tiff shares with us her arts, farts and crafts. .tiff is a very talented artist and her pieces here are pretty darn swell.

DtoidBaltimoreDC is still trying to gather Dtoiders to attend Play! If you want to hear some good music and live in the area, contact DtoidBaltimoreDC.

Soggy Toast has made an abomination! He modded his Xbox controller up to do things it’s not supposed to.

vonrichter, main man at the SR388 project, gives us a little update on what’s going on. To bad I suck at Metroid.

Kamikaze Tutor shows us his Dtoid clothes. It took 10 weeks to get to him, but I’m sure it was well worth the wait.

Zen Albatross, power-glove, Nintendoll and Cataract all went to NAVA yesterday and played some videogames. Captain S, Digital Press Mike and The Angry Video Game nerd were all there as well, and a slow-motion brawl took place between the three of them. Be sure to check out the video of the slow-mo fight that Zen linked to.