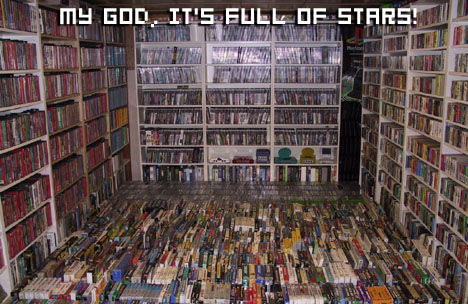 I had the most wonderful dream last night. Hey, where are you going? I swear it has nothing to do with me, a bottle of scotch, a swimming pool full of maple syrup and one Mr. Ron Workman. Well, not this dream, anyway.

No, this dream was a magical one: somehow, I had stumbled from the halcyon realm of naked women and booze into some sort of flea market, and before me sat the most incredible stockpile of classic games I had ever seen. Old SNES, NES, and PSX games, all in amazing shape and in their original boxes and cases, priced to move at three bucks a pop. Ravenous, I snatched the games by the armload, shooting steely glances at anybody who would interrupt my gathering of this massive valentine from the mid-90s.

Setting the load on a nearby countertop, I loudly proclaimed that if the woman selling the games would wait but a moment, I’d go withdraw every last dollar from my bank account so I could buy them all. It was paradise. Alas, just as quickly as I had stumbled upon such treasure, the vision was ripped away from me by that confounded alarm clock. Dammit.

But I woke with a sudden curiosity: many of us are collectors, and can recall fondly the wasted hours in pawn shops, thrift stores, and garage sales looking for that perfect score — the find to end all finds. So, Dtoiders, what are your best finds in gaming? Tell us in the comments about the sweetest deals, the best bargains, or the otherwise unusual scores you’ve come across over the years, and be sure to hit that jump so you can read ours.

Aaron Linde
Best of all, I’d wager, is checking out a Circuit City in San Diego, CA while on vacation, back when many electronics retailers were clearing out their unsold PSX games. While I poked around, a glint caught my eye, a glint that read “$4.99”, and indeed, there they were: two sealed copies of Suikoden II. While this was well before the game could reel in the batshit insane prices it now commands on eBay, I managed to finance a used Xbox by selling just one of those sumbitches.

Also, I ripped off some kid I knew on IRC years back with a trade that I’m sure he regrets to this day. He wanted Pokemon Yellow and a Gameboy to play it on, and I wanted Chrono Trigger. The trade went down like this: I sent him Yellow and a red Gameboy Pocket that I had neglected for years since picking up a Color, and he sent me his copy of Chrono Trigger, in beautiful shape with box, instructions, and those awesome maps. As an added bonus, he sent me his Final Fantasy III box and instructions to compliment my naked cartridge, as he didn’t fancy himself much of a collector.

I probably ought to feel guilty, but — come on, man! Chrono Trigger!

Niero
I recently bought near-mint copies of the original NES versions of Metroid, Contra, Cobra Triangle, and Ninja Gaiden in the cardboard box, with instruction booklet, sleeve, and even that little styrofoam square for $2 each at a thrift shop.  The boxes are still shiny and one of them still had the shrink wrap half-on like a broken condom, it was like they fell out of the sky from a 1988 time portal.  Best find ever!

Hushgush
We have these storage facilities where I work that people abandon sometimes, for whatever reason. If the company is unable to contact the previous owner after 90 days or so, we have to go in and remove all their junk and toss it in the dumpster. I had to do this about a year ago, and when I opened the door, buried under all the other crap was an NES, still in the box, that was purchased in 1989. I know because the receipt was still in the shopping bag with it. I took it out to get a good look at it and noticed that the box was still factory sealed with the little round stickers. It was a complete, perfectly mint condition NES Action Set [Ed note: An NES, two controllers, a Zapper, and the SMB/Duck Hunt combo cart] that had never even been opened.

Hamza “CTZ” Aziz
I have hundreds upon hundreds of stories to tell. My favorite has to be about the former SEGA employee who came in one day with 3 boxes filled with all kinds of goodies. This is what he had: Sega Saturn in box brand new, 10 brand new Saturn games, PICO in box with 20 PICO games (New and used), 32X, 20 32X games, 10 Sega CD games all brand new, Game Gear brand new, Nomad brand new, a dozen or so Genesis games, Genesis system in box, TV Tuner for the Game Gear and tons of other accessories for it, 10 brand new extension cords for the Genesis, and 3 brand new Saturn controllers. My store payed him $60 for all of it and he used the money to buy a brand new PS2 system. Story doesn’t end there though. I then turned around and sold it all on eBay. The best sale was from the Saturn and the Game Gear. Both does auctions went to one guy for just over $600.

Chad Concelmo
Back in the day, a kid on my bus traded me Kid Icarus, Milon’s Secret Castle, Space Quest II and Startropics (with secret password letter included) for 5 of my “rare” Garbage Pail Kids.

Nick “Nick Brutal” Chester
I’ve got that beat. A box of raisins for a Rush ‘n Attack NES cart.

Faith
My friend Josh has given me both World of Warcraft, which I can’t play
yet till I upgrade my computer, and Final Fantasy III for the SNES for free. Nice guy, huh?

No real bargin finds, except on place called Nex in St. Catherines has
the best prices, trade-in values and is always willing to deal on
multiple prices. I found Donkey Kong Country there one day for five bucks.

Dick McVengeance
Typing of the Dead keyboard for $1, when it was priced at $14. Still need to find the game, though.

Fronz One day when I was at my Godmother’s house I went into her garage and saw an Apple IIe she hadn’t used in decades. I asked her if I could have it and she yes. Mostly a piece of shit, yes, but just think — one day Godmothers will be giving away PS3 too. If my goddaughter grows up to be a gamer she’s going to have a very happy future. She can’t have my PS3 though. At least not until she stops watching Dora the Explorer.

How ’bout it, gang? What awesome finds have you stumbled across over the years?