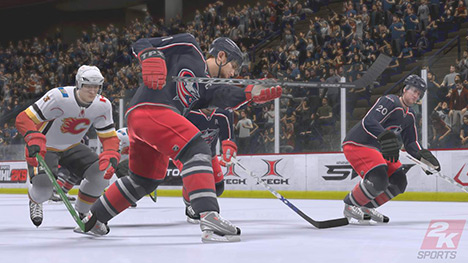 In case you missed it, 2K Sports released their first trailer for NHL 2K9 a couple of days ago, and now we’ve got a bevy of screens to go with it. There are 15 images of the PS3/360 version of the game, and 17 from the waggle-enhanced Wii version.

Again, I’m happy to note that 2K’s infamous depth of field filter seems to have been removed from the game — now, there’s a simple focus blur effect that’s much less overzealous and intrusive. In other words, it’s the way it’s supposed to be. Speaking of the background, the crowd looks fantastic — fully polygonal and relatively detailed, not that last-gen 2D crap. Here’s hoping their animations aren’t as robotic as most videogame crowds (and that they repeat less).

As for the Wii version, its visual fidelity obviously isn’t up to snuff when compared with the HD iterations, but I can at least give it the standard commendation: “It looks good…for a Wii game.” More intriguing is the last Wii screenshot, which shows off the interface of a Wiimote/Nunchuk fighting minigame. That actually looks fun — I just hope it works better than Wii Boxing.

Hit up the gallery below to see all the shots. NHL 2K9 will skate over to store shelves for the PS3, 360, Wii, and PS2 on September 8th.