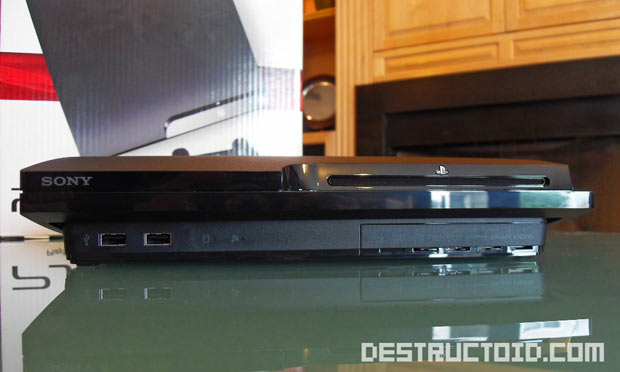 It’s a good thing we didn’t travel all the way to Germany just to watch somebody hold a PlayStation 3 Slim up on stage from a hundred feet away. We would’ve been out of town when one showed up right on our own doorstep earlier this morning.

Yup, we’ve got one, and Nick Chester and I have spent the better part of the day manhandling it. In more ways than one, it wasn’t exactly what we expected. We’ve got a full unboxing video on the way for you tomorrow; but while that’s in the oven, we’d like to hurry up and give you a closer look at this thing.

Hit the jump for photos, our impressions, and a detailed rundown of just what you’ll be getting when you first pull Sony’s new console out of its box on September 1st. 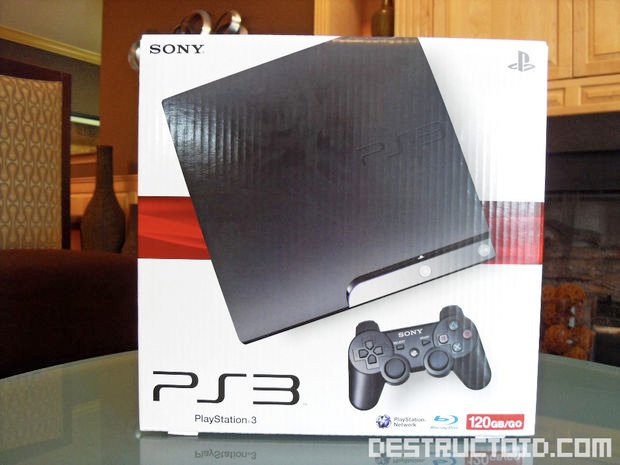 Ta-da. I don’t know what you want me to tell you here. It’s a box. One thing you will notice, however, is that the word “Slim” is actually nowhere to be found. Sony seems to want to make it very clear that this now IS the PlayStation 3. One and only. 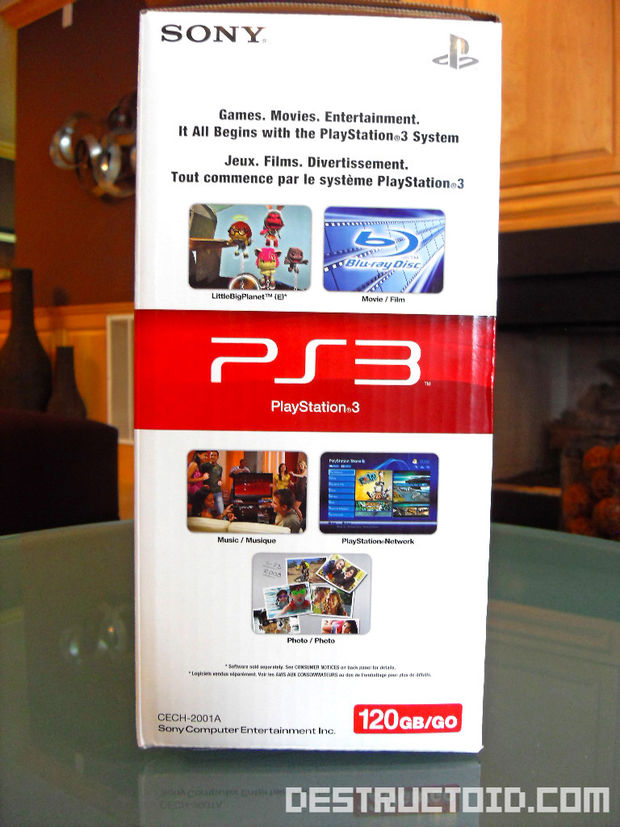 If you’re fascinated by the packaging for some reason, there are more photos of the box in the gallery to give you a full 360-degree look. Personally, we were more interested in what was inside of it. 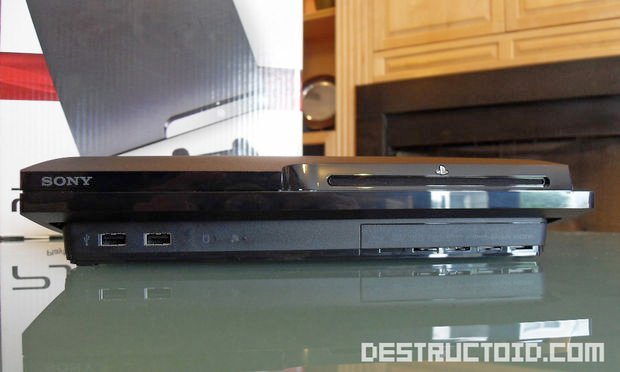 Spoiler: It was this. The first thing we noticed was that it looked bigger than we expected it to be. Maybe the hype had gotten to us and we were looking for something truly diminutive, but as you’ll see in tomorrow’s unboxing video, that was our initial reaction. However, that only lasted until we dragged out the original PS3 and put them side by side. 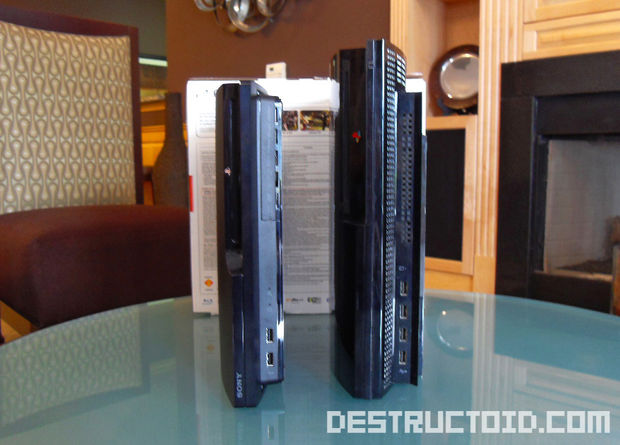 Yeah, it’s smaller. If you’ve never owned or had much interaction with the original, you’re not going to be blown away by the difference. But if the monster you see on the right already lives in your house, this is quite a change. 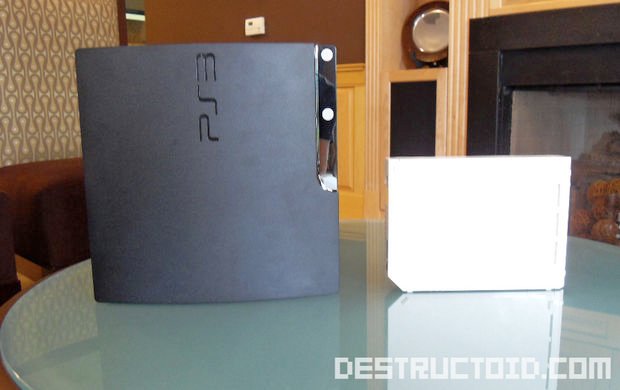 Compared to something like the Wii, this is definitely still the fat kid. 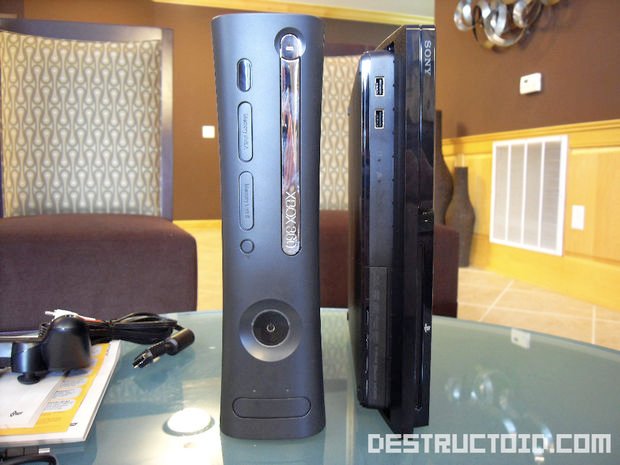 Next to the 360, on the other hand, it’s a much different story. While the Slim measures larger from front to back and will stick out from your shelf a bit more, there’s no arguing that it’s smaller in overall volume. It’s still a bit heavier, but in terms of taking up space in the universe, we wouldn’t say it’s much more of a hog than your launch-era PS2 was.

Keep in mind also that the Slim’s power brick is internal, so when it’s all said and done, this will be taking up a hell of a lot less room in your entertainment center than your Xbox 360. 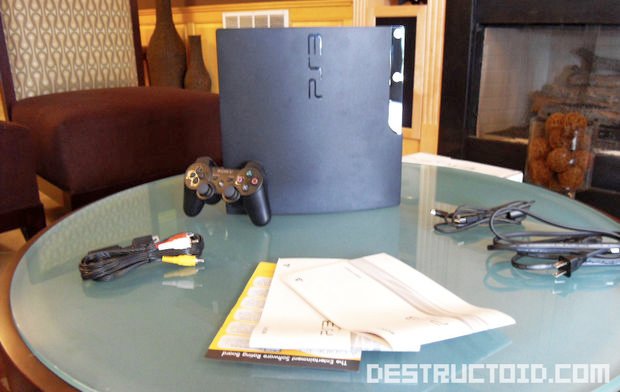 Comes with everything you see here! Console, power cord, one DualShock 3 controller with USB charging cord, manuals, and one … composite cable. *forced smile* 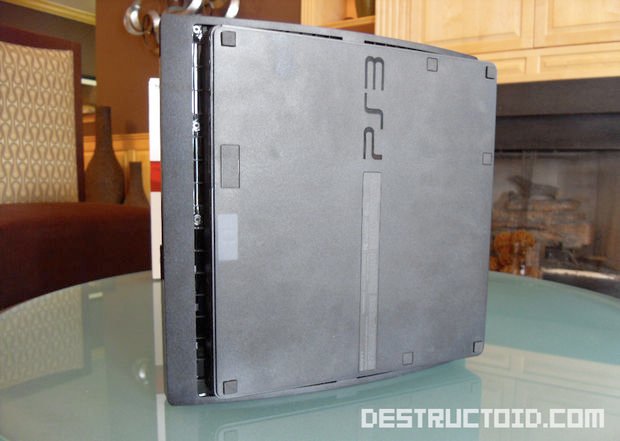 The new logo appears on both the top and bottom, and beats the hell out of that Spider-Man font no matter which side you’re looking at. The unit stands reasonably stable when positioned vertically like this, but if you’ve got kids or feisty cats running around the house while this is out in the open, the optional $24 stand might not be a terrible idea. Otherwise, unless you’re keeping it on top of a tall bookcase in a region that’s prone to the occasional earthquake, we think you’ll be okay. 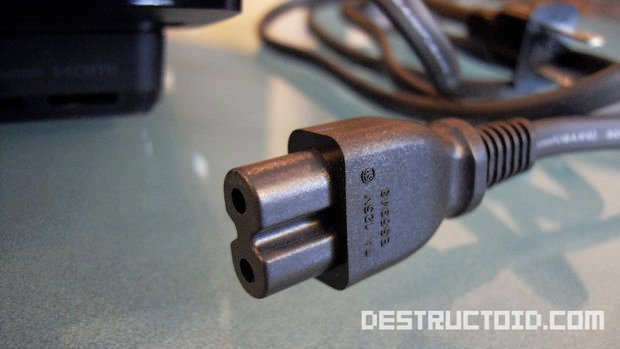 The only difference you’ll notice with the included accessories is the new AC power cord. It’s much smaller and more akin to what you used to plug in your fat PlayStation 2 with. 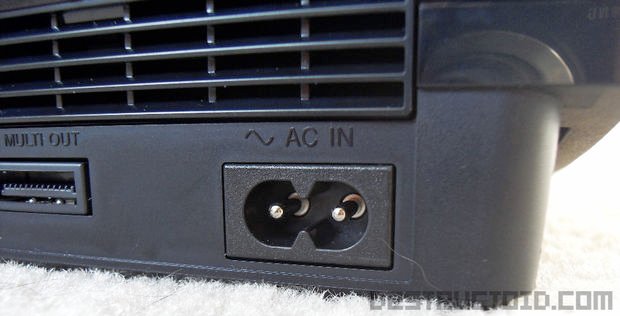 The smaller connection also makes it much easier to unplug and work with if you need to move the console around or take it with you somewhere — an idea that won’t sound so ridiculous from now on.

The back of the unit is more or less what you’d expect. An Ethernet port, kept company by HDMI, optical and multi-AV outputs, respectively. 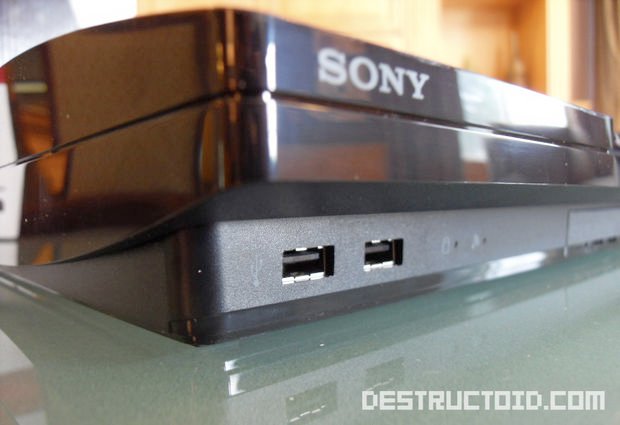 One of our biggest complaints with the Slim is the location of the USB ports and indicator lights. If you already own a PS3, you know what a pain in the ass it is to plug anything in or see what’s going on with your hard drive or Wi-Fi connection unless you’re lying on the floor looking up. The lip that sticks out over the base portion of the console seems even bigger with this new model, so that annoyance is, unfortunately, still something you’ll have to deal with. 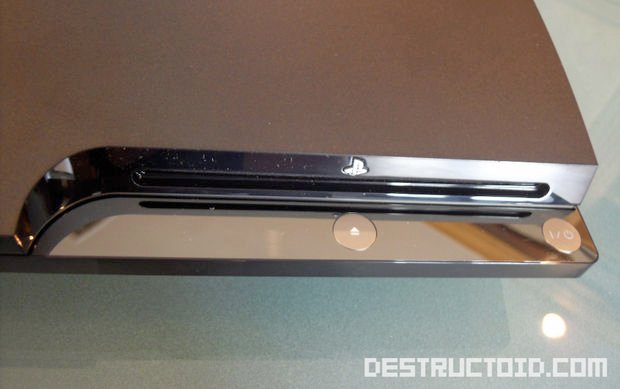 The recess where the disc drive and power/eject buttons are located now has a dark, shiny, titanium-like finish. It doesn’t come out too well in photos or tomorrow’s unboxing video, but you’ll notice a difference when you see it in person. Not silver, not glossy black, but somewhere in between. It’s a slick new look, and we actually had a very hard time trying to get fingerprints to show up on it. That may have just been the lighting in the room we were in, but either way, it’s a great improvement over whatever you’ve currently got. 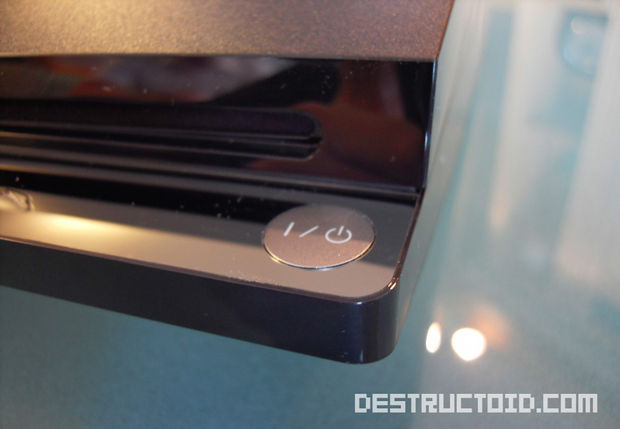 Speaking of those buttons, that’s just what they are this time around. Buttons. Gone are the silly “touchpad thingies that nobody asked for, I hope we’re not paying extra for this, why did you do that” controls. 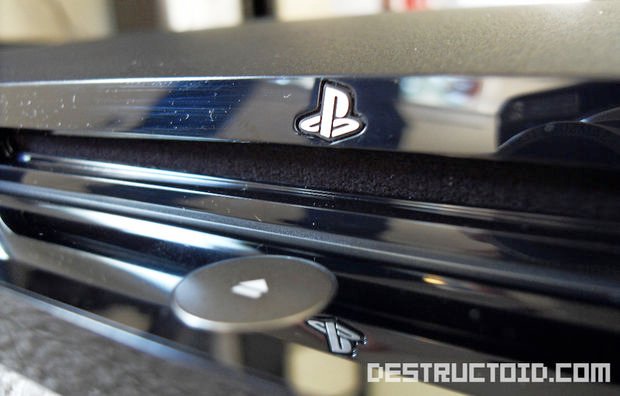 The PS logo no longer rotates. Gasp. Fire, brimstone, etc. You’ll get over it when you hear how incredibly quiet this thing is. 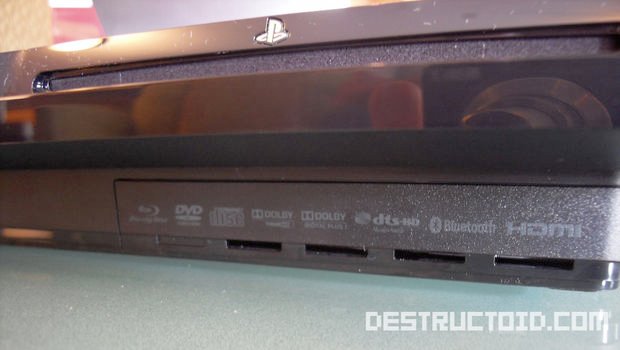 Or, rather, when you don’t hear it. This was the one thing that Nick and I were most impressed with. This thing is quiet. Scary quiet. “WTF, is it even on?” quiet. Nick thinks the optical drive makes just a bit more noise than the original when inserting or ejecting a disc, but it didn’t seem any louder to me. Either way, once your game or movie is in there, the thing is virtually silent.

Keep in mind we were pretty busy with this today and didn’t exactly get to jump into any eight-hour gaming sessions, but we certainly played it. You’ll probably be as impressed with its inaudibility as we were. I’d venture to say it’s even quieter than the Wii. 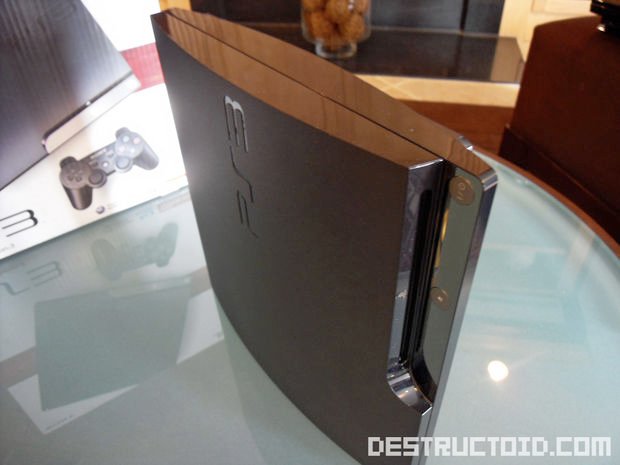 Final verdict? Shit’s tight, son. Not exactly the most breathtaking piece of technology we’ve ever laid eyes on, but it’s enough to make you want to trade in your now-fatass original PS3 once you’ve seen it in person. Will it be the smallest console in your setup? No. But it makes its predecessor look like a hulking beast, and it’s lighter, far quieter, and less expensive to leave on all day.

There’s plenty more where this came from in the gallery below, so feel free to browse through for some more photos and close-ups of the finer details. And again, be sure to check back tomorrow for our unboxing video to see the PS3 Slim in action, and probably Nick and me making asses of ourselves on camera as well. We’ll give you a look and listen at what to expect.

Nice job, Sony! Now get back in the kitchen and publish some more games for us to play on it.