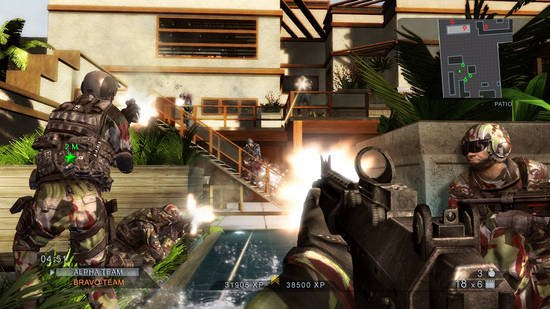 It seems like Ubisoft knows exactly how to make a tactical FPS game just the way I like it seeing as how theirs is the only ones I can play. Case in point, Rainbow Six Vegas 2 is fantastic. I recently got to play the game on the Xbox 360 and am now here to tell you my tale so you all can live vicariously through my words.

I played everything Rainbow Six Vegas 2 offered, but can only share to you today my experience of the multiplayer. Stay tuned for information on the single player portion of the game in the coming weeks. Until then, hit the jump for details on a game that I think is finally going to take me away from Halo 3’s multiplayer. 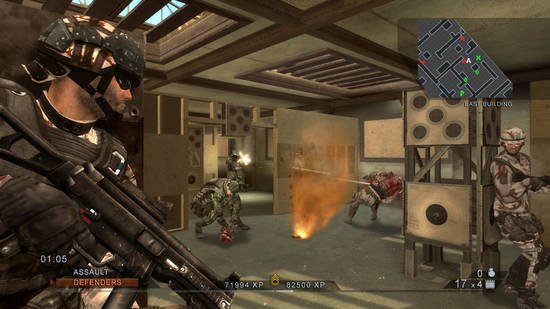 First, lets take a look at the character customization. You play as Bishop in the single player game who is completely customizable. Whatever character you create in the main game, it will used in the multiplayer. Be it Asian, Black, White, male, female, your imagination is the limit.  And of course, you can still take a scan of your own face (PS3 and PC players can face scan now too). Or, if you really want to freak out your opponents, a scan of a baby face works too. Just please don’t scan your junk, you damn griefers.

Beyond the physical attributes, you’ll also be able to outfit your character in any type of clothing. Such as Navy, Army, SWAT uniforms among many others. Body Armor, eye protection, hats and a few other things will also be available for your character. A few are unlocked right away, but to get more and better stuff, you have to excel in the Single Player and Multiplayer as you go up in rank. The same applies to the weapons and attachments.

All this was in the original Vegas but they’ve fine-tuned this now with the new A.C.E.S system. Advanced Combat Enhancement and Specialization factors in three fighting categories: Close Quarters, Marksmanship and Assault, which will determine what new weapon or item you will receive. Basically, this system rewards you for playing tactically and not like a douche bag that loves to rush in guns a’blazing. So getting a kill with C4, taking someone out across the map with an Assault Rifle, to killing people through cover are some of the ways to earn rewards.

All the weapons from Vegas are back in addition of 11 new weapons such as a new class of shotgun and sniper rifle. Some of the new weapons, by the way, are requests by the hardcore Vegas community that Ubisoft added in.

In addition to the weapons, there are 13 new maps including remade maps from Rainbow Six: Raven Shield. I got to play on three of the new maps as well as playing three game types, two of which are brand new for Vegas 2.

The above video shows off the map called CQB Training. The map is set up as a training facility with a couple of rooms containg a ton of plywood, which creates small hallways and enclosures. This is where I saw some new environmental effects in Vegas 2. Typically, if you’re behind a wall seeking cover, you’re usually fine. But now, if you hide behind plywood, drywall and any other type of weak structure, you can get taken out as bullets can penetrate these type of surfaces.

The video also shows off the new game type called Demolition. One team has a bomb, which they can set up at one of two locations on the map. Once the bomb is armed, the opposing team has one minute to defuse the bomb. If they defuse the bomb though, then the opposing team wins. I found this mode to be extremely challenging. Because of the way the rooms are set up, the bombers can easily be hiding around watching over the bomb even if you think it’s save to enter a room.

The next map we played on is called Villa and it constantly reminded me of the Villa level from Perfect Dark 64. The fight takes place all over the Villa from the garage, kitchen and the rooftop.

It was on this map that we also tried out the second new game type called Team Leader. Team Leader is basically like VIP from Halo 3 but with a very nice twist. So long as the Team Leader is alive, that team will have an unlimited number of respawns. Once the Team Leader is taken out however, that team won’t be able to respawn anymore. A team can win by either taking out the entire opposing team or getting their Team Leader to the extraction points. 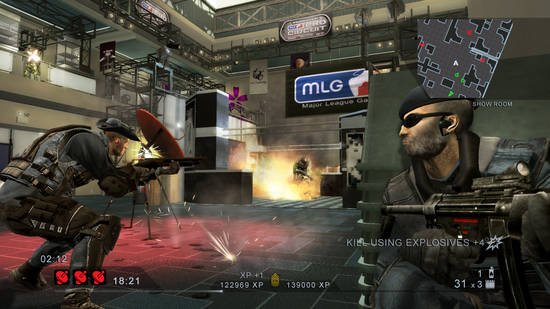 The third new map we played on was based at the convention center where a gaming convention was taking place. MLG banners and gaming setups are set up all over. Seeing all this gave me a real good laugh. This really is some nice fan service.

This is where we played our last game type called Total Conquest. In this, each team needs to capture three satellites and defend them for 30 seconds so they can send out their signal. This ended up being my favorite mode, which is funny since I hated it at first. This match can get really intense, as the teams will constantly go back and forth.

Some of the other new additions to Vegas 2 includes the ability to sprint. It last for only a short time and if you try to sprint again immediately after stopping, you won’t run as far as before until you catch your breath again. It’s nicely balanced so players can’t abuse it. I’m really glad to see sprinting being included in more and more FPS games.

Matchmaking has been extremely overhauled. It will no longer take forever to find a game or start a game. I was shocked to hear that it would sometimes take up to 20 minutes to set up a game in Vegas 1 (this was usually associated with every player having a costume face scan though). The new matchmaking system will also be more fine tuned and pit players that are on the same skill levels better than before.

Finally, just like in the single player campaign, you really need to work as a team here. The videos above have great examples of what I’m talking about. For example, on the Villa level where two guys get next to a door as another guy slowly walks into the building. The the two other guys then lean in to give that guy some cover. Teamwork is key.

Rainbow Six Vegas 2 will be out March 18th for the Xbox 360, PlayStation 3 and the PC. And don’t forget to keep an eye out for more hands-on coverage on the single player in the coming weeks.