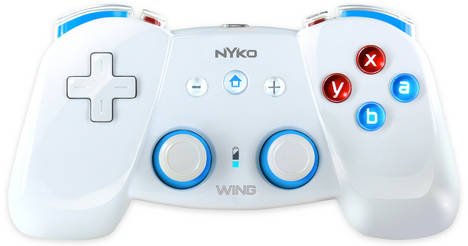 Nyko had a little event in San Francisco with Capcom last week where they showed members of the press their new Wing Controller, along with a selection of Capcom’s Virtual Console titles. I played with the controller for a good half-hour as I played Ghosts ‘N Goblins, Super Street Fighter II and Mega Man 9. A little side note here: I forgot how impossibly hard Ghosts ‘N Goblins was, Chad Concelmo is a masochist for liking Mega Man 9’s difficulty, and I’m still awesome at Super Street Fighter II even though it’s been years since I’ve last played it.

Let me get this out of the way first before I continue: I hate the Wii Classic Controller. It never feels right in my hands due to it’s odd rounded shape and the joysticks aren’t the greatest.

Enter Nyko’s new Wing Controller for the Wii where it might be the first time in the history of Nintendo that a third party accessory is actually better than a Nintendo product. Simply put, the controller felt fantastic. It’s extremely smooth, the layout feels right and the Wing barely weights a thing.

The Wing is wireless and comes with a little transmitter that you’ll plug into the Wiimote. It will come with 2 AAA batteries and you can use rechargeable batteries that can be charged in the Wing so long as you have a Mini USB cable.

The Wing will be out this October for $29.99 and will make for a great alternative to the Classic Controller. Check out the official product page for more info on the Wing.