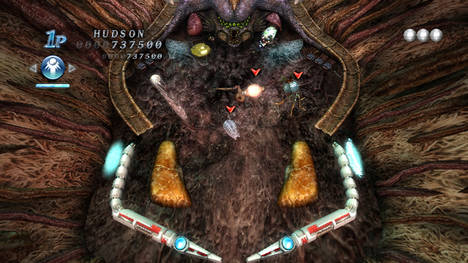 It’s been twenty years since the original Alien Crush was released for the TurboGrafx-16 and it remains one of my favorite video pinball games. From the visual aesthetic to the table control, it’s an excellent title and something you really should pick up on Virtual Console if you haven’t already.

At PAX this weekend, Hudson was showing off what they referred to as a “near-final” build of the Japanese release of Alien Crush Returns. Billed as a direct sequel to Alien Crush, it is looking to be quite the update, especially with the slick, new graphics we’ve seen in screenshots.

The game hit the WiiWare service in Japan last week and we should be seeing it come to the US in a few months. Being that I’m a big fan of the original game, I was really looking forward to this and managed to spend a decent amount of time playing the Arcade mode.

Does it live up to the pedigree established by its predecessors? Hit the jump to see my impressions. 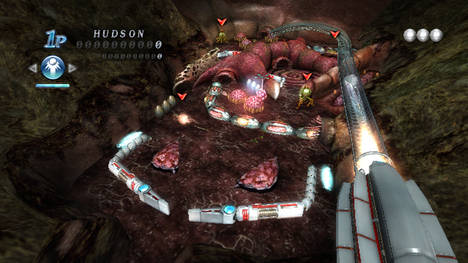 I want to get the graphics out of the way here. It is a fine line to walk because, while it’s a pinball game and those have never really needed to look amazing, Alien Crush featured a distinct and impressive art style. The developers are obligated to try and recreate that now. And, for video pinball, it looks pretty good. The whole table writhes and pulses with a life of its own. Some elements are a little bit on the jagged side, such as the flippers, but the majority of the design has had a good bit of love injected into it.

The complete game features a Story Mode with six levels and an Arcade Mode featuring three different tables. As the preview build was entirely in Japanese, we didn’t play Story Mode, but I’ve been told that the story revolves around aliens taking over a space station and humanity has sent in Roger Daltry to save the day with mad pinball skills.

You control the flippers using a combination of buttons on the remote and nunchuk while the analog stick launches the ball. This control scheme does help to evoke the experience of playing on an actual pinball machine, even down to shaking the remote to give the table a little nudge to position your ball with. It works fairly well, but the table bump is really sensitive and I frequently found myself accidentally shaking the remote when all I wanted to do was move a flipper. Thankfully, the tilt is very forgiving and was never set off despite my overzealous playing. 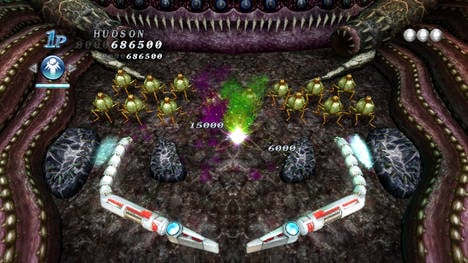 The tables have a lot of activity going on in them, with creepy crawlies moving all over the place, disrupting the movement of the ball and giving score opportunities. Killing them also opens up new pathways to shoot down and other bonus targets. The layout of the boards is appealing, with a fair number of directions you can travel but they felt like they still needed a bit of polishing. On more than one occasion, my ball became either stuck on a corner or the movement reduced to a crawl as I waited for it to drift it’s way down through a particularly tight pocket.

Just as in the original game, navigating the ball into certain targets will take you off of the main board and into a bonus level. These typically consist of destroying a horde of enemies or boss monster to rack up major bonus points. I was told there are about two or three different bonus stages per table in the game, which is a little disappointing when compared to the number of these diversions found in previous titles.

All told, it looks promising if you’re a fan of pinball games. There are still some areas that I think can use a little work and hopefully these were ironed out in the Japanese release. If not, well, they have some time while localization is going on to tighten screws. No firm word on when it will be ready for American audiences, but a Hudson rep has said that we can probably expect Alien Crush Returns to be released in about two to three months.