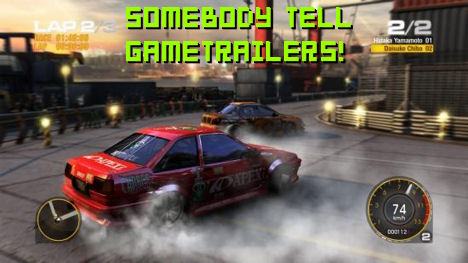 Reports are coming in of problems with the Xbox 360 version of Codemasters’ Race Driver: GRiD. There is an issue with the game where it suffers from perpetual freezing and stuttering during races. I can confirm that the review copy Codemasters recently secured for me suffers from this as well.

GRiD‘s dev team say they’re close to figuring out the problem and that a patch is on the way. Meanwhile, those suffering from freezing issues are advised to take out their hard drives and play using a gamertag that’s been saved to a memory card. I am sure I could say something acerbic and nasty, but I’ll leave it.

We’re close to getting to the root of the problem and we will be including a fix and a backup workaround option (just in case) in our forthcoming patch due within the next few weeks or sooner. We think the issue is due to specific drive hardware, possibly with bad blocks /sectors.

The best temporary measure is to copy your gamertag to a mem card, remove the hard drive and run the game that way. Replays and caching will be disabled, though instant replay will still work as this caches to memory.

And yet another game becomes part of the patch culture growing up around modern home consoles. While patches are great to make improvements to the running of a game, they really shouldn’t be used to fix bugs that never should have shipped. Sadly, however, this trend won’t be going away anytime soon and PS3/Xbox 360 fans better learn to love the word “patch.”