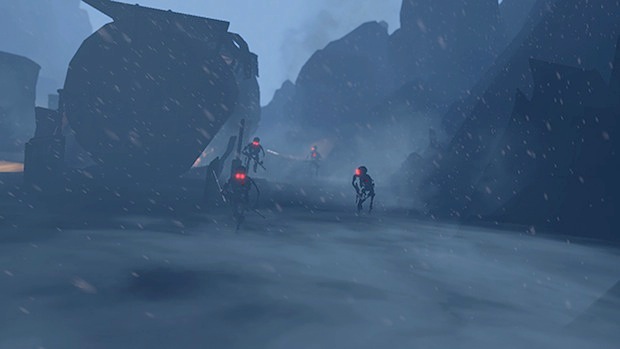 While the above could be a sinister joke, one of the most recent tweets blasted by the official Naughty Dog Twitter account has us thinking goblins could be coming to Uncharted 2: Among Thieves. Just look at it. Goblins. In Uncharted 2.

On the other hand, these little creatures could be broken Hobbits, twisted and shattered by the power of the One Ring. Or we suppose, in this case, Marco Polo’s little hidden treasure. Point is, we haven’t the slightest idea what the hell these boney-skeleton thing is. The tweet didn’t have the details.

“Working late tonight,” the tweet reads, “got a ton of things that need to get done …”

We’re checking in Naughty Dog on this one, but we’re still pumped about the possibilities of the image. The last we heard on the DLC front, though (which this would probably have to be delivered as) was that competitive multiplayer was to be the initial focus. If true, how the hell does this image fit into the picture?

[via Joystiq, thanks BS3 Owner!]

[Update: Look. A skeleton goblin thing. This is a level 60 multiplayer skin, that presumably, all the developers will be using this weekend during the double XP thing. Move along, we’re sorry — we haven’t hit this level quite yet to know much differently.]