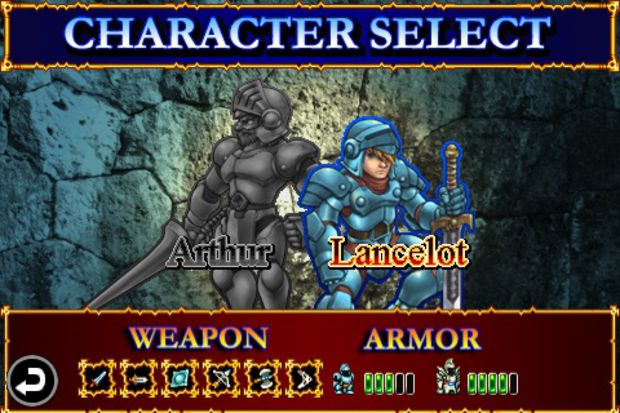 While some would argue that it was a poor idea for Capcom to bring the notoriously difficult Ghosts ‘ N Goblins to the iPhone, no one is listening. Yesterday, Ghosts ‘N Goblins: Gold Knight hit the App Store for the nice price of $2.99.

The game gives players the option to take control of Arthur or Lancelot, and while both basically control the same, their armor and available weapon sets differ slightly. The game looks pretty nice running on the iPhone, with updated 3D graphics remiscent of Ultimate Ghosts N’ Goblins for the PlayStation Portable.

My biggest concern would be the controls, as the series has always a mix of memorization, precise movement, and quick fingers. Gold Knight uses those “phantom” touch controls, with a d-pad that sits on the left side of the screen and three buttons — attack, jump, and a super attack — on the right.

As expected, the d-pad doesn’t respond like a physical d-pad; climbing ladders was difficult, the iPhone touch screen instead thinking I was pressing left or right. My fat thumb would also obscure most of the left side of the screen, so a few attackin monsters were able to get the jump on me. The attack button does rapid fire, which is nice — there’s no need to repeatidly mash your finger on your screen to take down ghouls with quick attacks.

But for $2.99, this is tough to not recommend, although I would argue that I probably would have paid $10 for a port of the same game on PlayStation Network or Xbox LIVE Arcade… where I’d be able to use a physical controller. The game, however, is not impossible — after some practice (and luck), I was able to complete the first stage and take the key for coming in.

Below is proof that I was able to at least best the game’s first boss, a purple demon with gigantic wings. It’s the little things.