You can’t keep a good game down. Much like other Atlus releases, Shin Megami Tensei: Nocturne is one of those games that you keep hearing about if you missed it the first time. This 2004 PlayStation 2 release isn’t necessarily super-rare, but it’s still pretty hard to find. That’s why, if interested, you’d want to jump on a reprint right away.

This demonic, super-Japanese RPG has a kind of cult following, as does the rest of the Megami Tensei series games. If you’re asking me, its a brilliant game. It’s so great that Capcom’s Dante (Devil May Cry) even makes an appearance. And that’s why I jumped on ordering a copy of the reprint before I told you about it. I’m not trying to be greedy, but I’ve been looking for a decently priced, well-kept copy for awhile now. We’re still good, right?

Play-Asia has Nocturne available for $44.90. This does not come with the soundtrack CD like the original release did. Who cares! You’re still getting a kickass JRPG that has been hard to come by for some time now.

What about you? Will you pick this up? Do you already have it?

Hit the jump for an image of the original magazine ad for Nocturne. 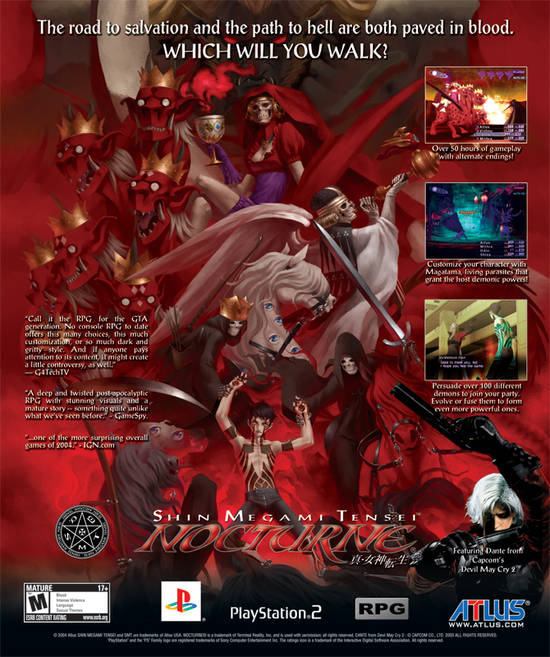