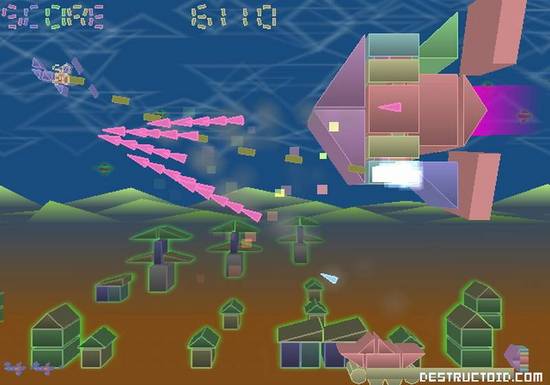 While I’m inclined to argue that the last thing the Wii needs is a game that look like a pre-schooler’s construction paper project gone awry, Blast Works: Build, Fuse & Destroy does sound like it’s bringing some unique concepts to the table. Announced today by Majesco Entertainment Company, the Budcat Creations developed side-scroller will attempt to set itself apart from the crowd by letting players create their own levels, ships, and enemy ships.

The game will also feature a unique “stickiness” gameplay feature, allowing players to absorb pieces and weapons of destroyed enemy ships to updgrade their own craft. Upgrades will also be available in “the Hanger,” which will allow you to customize weapons, propulsion systems, and armor.

When players grow tired of traversing the game’s 15 different land, air, and sea missions, they can create their very own ship from scatch with the Ship Editor, or design their own custom level. Budcat Creations also assumes you have friends (likely story!), and has included a cooperative two-player mode.