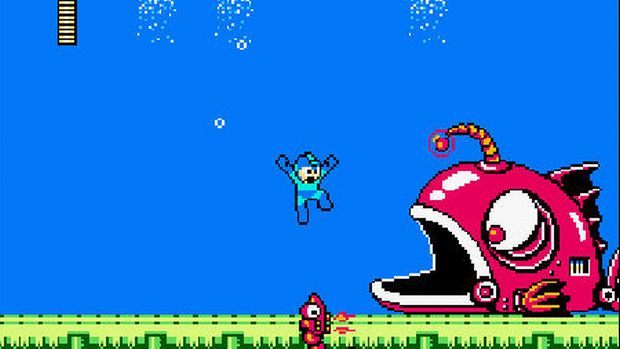 My plan was as follows: I’d go to “Fault Tolerance,” Clint Hocking’s talk on what I assumed was failure design, then I’d go to Jesper Juul’s “Beyond Balancing: Using Five Elements of Failure Design to Enhance Player Experiences” a few days later and compare the two.

This ended up being an idiotic plan, since the two had practically nothing in common apart from the fact that they were informative and aimed at people more intelligent and creative than myself. Where Hocking talked about improvisation and setting human beings on fire, Juul focused on comparisons like Peggle vs Mega Man.

My own poorly considered plan of comparing and contrasting the two talks didn’t make Juul’s lecture any less interesting, however, and shouldn’t stop you from hitting the jump and hearing my rundown of his ideas. Hopefully.

Juul defined failure as when a game punishes a player due to their failure to complete a goal. “Balancing” as a design idea is often defined as mitigating how often the player fails, but Juul finds this “actively harmful” – there is a “total failure cost” that can’t be measured that way.

The traditional idea of failure balancing requires that you put the player in a flow channel where the game challenge and the player’s skill are roughly equal. There is a general assumption that casual gamers do not like to fail, while hardcore gamers do.

A survey on the Gamezebo site made up of 183 responses, 93% female, average age 42, Juul asked which was worse: a game that’s too easy (30% response), too hard (17%), or equally bad (48%). This revealed that the idea that casual gamers hate failure is a myth – instead, designers should match failure design to the time constraints of players and communicate that failure properly. People casually play Solitaire, Juul said, even though this has a definite and possible failure state.

Juul’s next slide, “The Danger of Failure: Learned Helplessness” showed a chart of failure states for not just games, but education in general; through internal or external failure you can convince a learner either that everyone has the same problem (which is a good attitude to have), or that it’s only the learner’s fault and that the learner is subsequently stupid (which is unhelpful).

By interviewing players, Juul found that a game is too easy when it does not force the player to “reconsider what they’re doing [and] improve their strategies…from a subjective point of view, failure adds depth to your game.” If you can get through the entire game using the same dumb strategy then the player is never thinking, but if you fail them, you force them to reconsider and try something entirely new.

Juul moved on to what he called the five elements of failure design.

Failure count: how many times does the player reach a fail state? This is the traditional view of how failure works (think of arcade games and their limited number of lives).

Failure awareness: showing the player that they could have failed, even when it was unlikely (illustrated by a screenshot from Galaga, where there is only one enemy left on the screen and the player can easily kill it, yet intrinsically knows that they still could have been killed by the last ship).

Failure communication: addressing the player and telling them what their failure means. Juul showed Gears of War, whose visual skull-gear-thing-damage-indicator gradually shows you exactly how much damage you’re taking and subsequently how much you’re screwing up, as well as Brain Age, which gives you a comparison of your brain age in relation to others as a measurement of failure but also promises that the game itself is a method of improving upon that brain age.

Failure setback: What is the failure cost in a play session measured in time? An interviewed player mentioned that playing games like Mario Kart or Smash Bros. are more friendly to his family life than spending an hour with Mass Effect. Juul pointed out that peoples’ complaints about Too Human weren’t typically focused around the game being too hard or players dying too much, but that when players did die, it took way too much time to get back into the action.

Failure repetition: Does the player have to do the exact same thing after failing? Randomization minimizes this and if you force the player to replay too much in order to actually succeed, then this rewards rote memorization over actual strategy.

Since failure can add depth and content to a game and increase the player’s experiences, it is important not to put the player in a feeling of learned helplessness, and to qualify failure not by the number of times they die, but by the total failure cost in emotion and time. Juul linked these ideas to Clint Hocking’s talk earlier in the week, wherein jumping from the planning stage to the execution stage through spontaneous failure in Far Cry 2 was very quick and thus rewarding.